League City thriving as it grows bigger and bigger 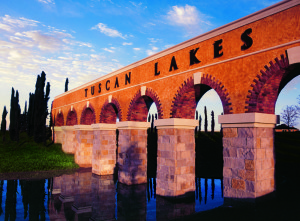 Back 35 years ago, one might have described League City as a “one-horse town.”

“As a community, we are thriving – our economy is growing, development is returning to pre-recession levels, and League City continues to succeed,” Mayor Tim Paulissen said as he addressed a recent League City Regional Chamber luncheon.

“We’ve seen great change in League City in the past few years, and certainly in recent months,” he continued as he reviewed some of the changes.

Over the last two years, he said, “we saw 2,058 new single-family homes built in League City.” And, there’s still potential in the development of the west side of town, he continued, pointing out the great things that have happened throughout the year with the new retail center near Countryside, the development of the Westwood neighborhood and some renewed interests in the southwest planned unit developments. And, that’s not all.

“There are plenty of exciting things still happening on the east side, too,” the mayor told the crowd.

“There new $74 million Methodist Retirement Communities development along FM 270 is nearly complete, and a small industrial park center has made a permanent setup on FM 646.”

In addition to neighborhoods like Marbella continuing to expand, he noted that “the city also is seeing an upswing in commercial and retail development that recognizes the upscale, well-educated, profession and family-oriented people who are choosing to live in League City.

“As our founders intended, the promise of Main Street has broadened to a community wide vibrancy and vitality. The new HEB store at South Shore Boulevard and State Highway 96 is. . .open for business, and. . .Kroger plans to build its fourth location in League City on the west side.”

Plus, there’s “intriguing possibilities” on the west side between Big League Dreams and the retail development at FM 646, he added.

The city is prepared, he said, for the growth, taking a smart, proactive approach to investing in the city’s infrastructure. “It’s the backbone of the community, the foundation on which our homes, safety and convenience rest and rely.”

Going on to mention several additions to the city’s lifestyle such as the WaterSmart Park and the new pool at Hometown Heroes Park, a new fire training facility, the Helen Hall Library renovation and street improvements, Paulissen turned to life’s basic needs. “For too many years, we neglected our water supply. (Now) we’ve taken steps to increase our daily peak water supply by more than nine million gallons a day And, we’re on track to add another 20 percent…to 36 million gallons daily in the next year . . . an increase of 70 percent in four years – while being able to raise the homestead exemption from 12 to 14 percent.

“As we continue to grow and develop, it is up to all of us to stay dedicated to making our community all it can be,” he added.