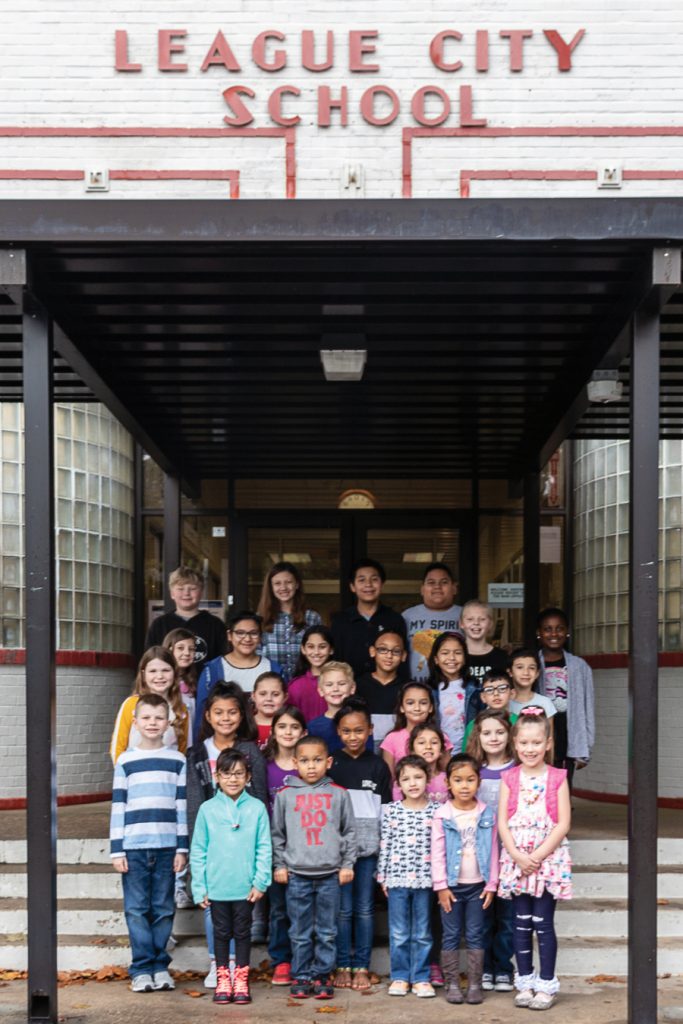 As nearly 30, third-generation students from League City Elementary stand on the steps of their current school, they might not be fully able to grasp the rich piece of history that lives within the walls of the oldest building in the Clear Creek Independent School District.

Earlier in 2018, these students were temporarily moved back into the building where one or both of their grandparents attended school so that contractors could finish a complete rebuild of the new League City Elementary more quickly. This new building will add yet another chapter in the history of League City schools since the early 1870s.

“Our students were so excited when we moved into this building last December,” said League City Elementary Principal Xan Wood. “They see this building as a nicer facility than the one that they had before. We are trying to tell the story of how far our schools have come over the last 100 years as well, while we are here.”

The first school, named the Clear Creek School House, dates back to 1873 when George Washington Butler built a one-room cabin to be used as a school for his children and those of his neighbors. In 1890, League City’s namesake, John C. League, purchased land in the original town of Clear Creek and set out to develop the city.

As the railroad brought in new families, a larger school was needed for local children. In 1894, League built a three-room building on the corner of Kansas Avenue and 2nd Street to be used as a community school. The Hurricane of 1900 would destroy this building, and the Little Green School House was built in its place in 1901. After 79 years of being used by the district, the building was torn down in 1980. A schoolhouse museum which displays local school memorabilia and educational artifacts now stands in its place.

In 1912, a $15,000 bond was passed by the citizens of League City to build a two-story brick building for a new school on the corner of South Kansas Avenue and Walker Street. The League City School served students in grades one through twelve for 26 years before being torn down during the Great Depression.

When the 1912 League City School was demolished in 1938, the new white school building was erected in its place. This is the building where the current students of League City Elementary are learning 106 years later.

Dera Cooke, who started her teaching career in the current building 37 years ago, reflects on the history of the school with fond memories. “Back to the future is what it feels like. I was so excited to actually come back here because I really like this building,” said Cooke who came out of retirement to help League City students with a variety of subjects and test prep.

The Clear Creek Consolidated School District, now known as the Clear Creek Independent School District, was formed on April 20, 1948 during a joint meeting of the boards of trustees of the League City, Seabrook and Webster area districts. Kemah, a common school district, voted to join the consolidation three months later. League City was the largest of the communities at the time with a population of about 1,000 people. The League City School was turned into an elementary and junior high at this point, with the high school students being sent to Webster High School.

“The front entrance of the school is exactly the same and I still remember the spot in the gym in there where I had to put my nose to the wall one time,” said first-generation League City Elementary student John Lothrop. He attended school in the current building for grades one through six beginning in 1957.

Through the years after consolidation, the League City School building has served multiple purposes once the most recent League City Elementary was built in 1960. As the District grew, space was needed to house different grade levels and even different schools, such as Clear View High School and Clear Path Alternative High School. Clear Creek ISD is now celebrating its 70th anniversary this year and has gone from serving nearly 1,000 students in 1948 to now more than 42,000 in 2018.

Even through the excitement of having a new building to learn in next year, Principal Wood still sees the importance of teaching her students about the history of the building they are currently in before moving into their new space.

“As the year has progressed, the history of the building and the classrooms has been shared through staff and local community members and students find it all so fascinating,” said Wood. “Having more than 30 third-generation Mustangs and many more second-generation students, the parents and grandparents have also enjoyed coming back ‘home’ to visit.”

The new League City Elementary building, which will have a capacity of 900 students, is projected to be finished in August 2019 before the beginning of school. This project was part of the May 2017 CCISD Bond program approved by voters.

“I absolutely cannot wait for our students, teachers, and families to walk into the new building next August,” said Wood. “We have had the pleasure to watch it go up beam by beam and we celebrate each week the progress being made.”

For more information on the 70th anniversary of Clear Creek ISD, visit www.ccisd.net/70years.

5 Commentss to “League City school history dates back to 1873”