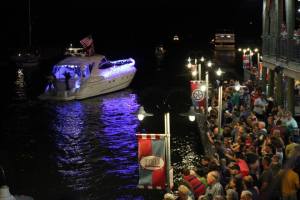 For more than 50 years, the official beginning of the holiday season for the Bay Area has been the annual Christmas Boat Lane Parade on Clear Lake, and this year’s 53rd annual parade sets sail at 6 p.m. on Dec. 13 from the South Shore Harbour Marina in League City and Nassau Bay Lagoon.

The parade started with five guys sittin’ and talking at Lakewood Yacht Club. They decided to decorate their boats and parade around Clear Lake the following weekend. It was cold, foggy and rainy as they pulled out of the marina to begin the parade, and they had a hard time seeing where they were going.

The people at Jimmie Walker’s Restaurant (now Landry’s), had heard about the parade so they kept looking for the boats through the fogged up windows until finally they appeared.  Five decorated boats bravely paraded in the wind and rain down the channel, and when the captains saw the people in Jimmie Walker’s loving it, Capt. Jack Campbell got on his radio and announced that “this is our inaugural Christmas boat parade — and it’s been a tradition ever since.

The parade has grown tremendously to become one of the largest, lighted boat parades in the nation with over 100 entries annually. Attracting 100,000 people, the brilliant display of boat lights can be seen by viewers on land, and by the hundreds of boats anchored throughout the lake.  The restaurants along the shores and at the Kemah Boardwalk do a booming business while homeowners and apartment dwellers on the lake plan annual parties.

Some of the boaters have participated for more than 25 years and their decorations become more creative and elaborate each year.  Plans begin well in advance and are kept “secret” right up to parade night. Floating entries of all sizes include rowboats, bicycle-powered craft, sailboats and power boats. The boats have music, passengers in costume, and all types of moving and non-moving parts, Parade Chairman Jim Christiansen points out.

Some outstanding past entries include an airplane with a turning propeller, a hot air balloon, a waving teddy bear, a brigade of toy soldiers, a space shuttle with flaming red lights “blasting” it through the channel, 40 ft tall Christmas tree with lights synchronized to Christmas Music, a giant leg lamp from a Christmas Story and a 42-foot flying dove with wings that moved up and down, he adds.

“Just imagine 100 boats with hundreds and sometimes thousands of lights reflecting off the water, the boat crews wishing onlookers a joyful holiday — it’s an unforgettable experience that captures the true meaning of the Christmas Spirit.”

Boats will reach the judges at the Kemah Boardwalk around 7 p.m., then ride out into Galveston Bay and return. The boaters will follow past the spectators at the South Shore Harbour Marina, the Nassau Bay Lagoon and down the channel near Seabrook, Clear Lake Shores and the Kemah Boardwalk.

The City of League City is proud to be the title sponsor of this traditional parade, Mayor Paulissen said. The City of Nassau Bay, also a long-time sponsor, will signal the start of the parade with a spectacular fireworks display from their peninsula.  Additional major sponsors are the City of Kemah, Gulf Coast Mariner Magazine/Bay Group Media, the Kemah Boardwalk, Hollis Huff Lewis & Co. P.C., Photosbyeddieharper.com, South Shore Harbour Resort, The Pet Palace and Boating Trades Association of Metropolitan Houston.  The Blue Marlin hosts the parade committee while the judges enjoy their evening at the Cadillac Bar at the Kemah Boardwalk.

The following morning local businesses sponsor individual awards at the Awards Brunch, held at South Shore Harbour Resort in League City.  The grand finale of the morning is the presentation of the top five awards honoring the parade’s founders.

Visitors are encouraged to spend the weekend in our sponsoring city’s hotels League City, Kemah and Nassau Bay.  Go to www.visitbayareahouston.com for information.

The Clear Lake Area Chamber of Commerce parade committee is dedicated to making the event a success every year, Chamber President Cindy Harreld said.  “Families and businesses with boats of any size are encouraged to register for the parade. Go to www. ClearLakeArea.com or call 281-488-7676 for an entry form or more information regarding Dec. 13 and 14.”