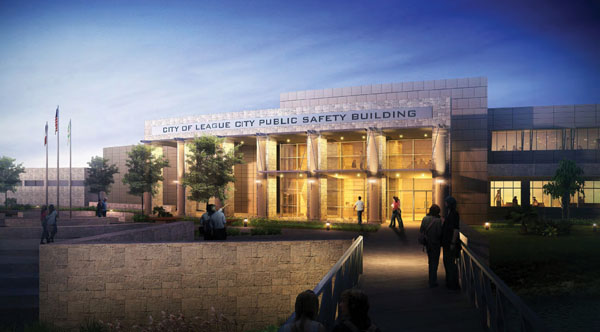 Many League City officials were on hand to help break ground for the city’s proposed new $24 million public safety building. Mayor Tim Paulissen called plans for the 71,000 square foot structure across from City Hall “one of the largest investments our city’s ever made and one of our most important.

“This is an investment in equipment for our first responders, the police and firefighters who dedicate themselves to protecting our lives and property,” he told the crowd that also included former Mayor Tommy Frankovich and County Commissioner Ken Clark.

Construction is expected to take about 18 months. When the facility is completed it will house all police operations – dispatch, training, record and evidence storage and the jail — plus the fire department administrative offices, and offices for the fire marshal and emergency management.

And, in the event of another hurricane, the facility – to be built to withstand winds of up to 146 mph – “will house our emergency operations center and provide shelter. . .for essential support staff (during) the recovery afterwards.” The building is designed to accommodate future growth, the mayor said.

“Some people may say we should live within our means, but I would say we are living within our means,” he told the crowd. “Interest rates are down, and we went from a cost of about $54 million on the original drawing board…down to $31 million. City Council considered this the No. 1 priority for long-term growth,” he said.

City Manager Mike Loftin welcomed the crowd, and Acting Police Chief Doug Wologo and Fire Chief Brad Goudie also spoke of how their departments were looking forward to moving into the new building.