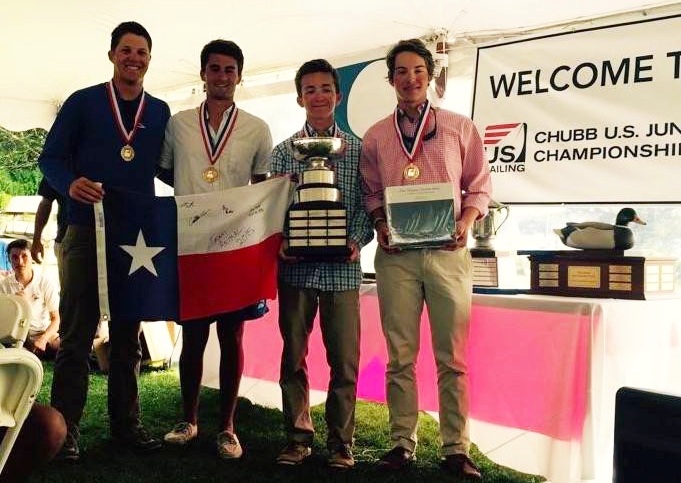 For the first time ever, the Lakewood Yacht Club youth team has won the Sears Cup, which is the oldest youth trophy in sailing and has been awarded since 1921 – bringing congratulations from the Lakewood staff and membership on bringing home the highly coveted award!

The United States Sailing Association’s 94th U.S. Junior Championships Regatta, one of the country’s most prestigious events for sailors ages 13-18, was held at Wianno Yacht Club in Osterville, Mass., Aug. 2- 6 and Lakewood was represented as home to the best of the best for youth sailors!

Eleven teams from around the United States qualified to compete in this year’s Sears Cup through area eliminations in their region. Racing took place in a variety of conditions on Nantucket Sound, with a great sea breeze being the norm late in the day.

The Sears Cup is the oldest youth trophy in sailing and has been awarded since 1921. While this is the first time that Lakewood has ever won this prestigious award the young sailors are looking forward to keeping up with this trend!

In addition to Lakewood Yacht Club team winning the Sears Cup, Dylan Ascencios and Hunter Skinner, also represented Lakewood in the 420 class sailing for the Bemis trophy. Coming off several impressive events this summer, Dylan and Hunter looked to keep their momentum going. The two sailed most of the event in the top 10, but a tough final race saw them finish up at a still impressive 13th place overall.

In recognizing the success of the team, it’s important to also recognize Lakewood Sailing Director Marek Valasek, who joined the yacht club staff in May 2012 and has grown the club’s youth program into one that is recognized as stellar around the world. Due to his success, Marek was picked to judge the 2015 Opti Worlds to be held in Dziwon, Poland from Aug. 25-Sept. 5.

Lakewood Yacht Club is among the top 10 most prestigious yacht clubs in the United States and is currently celebrating its 60th anniversary. Lakewood’s boating tradition and history has beckoned those who love the water, as well as those that love to socialize and live life to the fullest. Visit lakewoodyachtclub.com for more information.