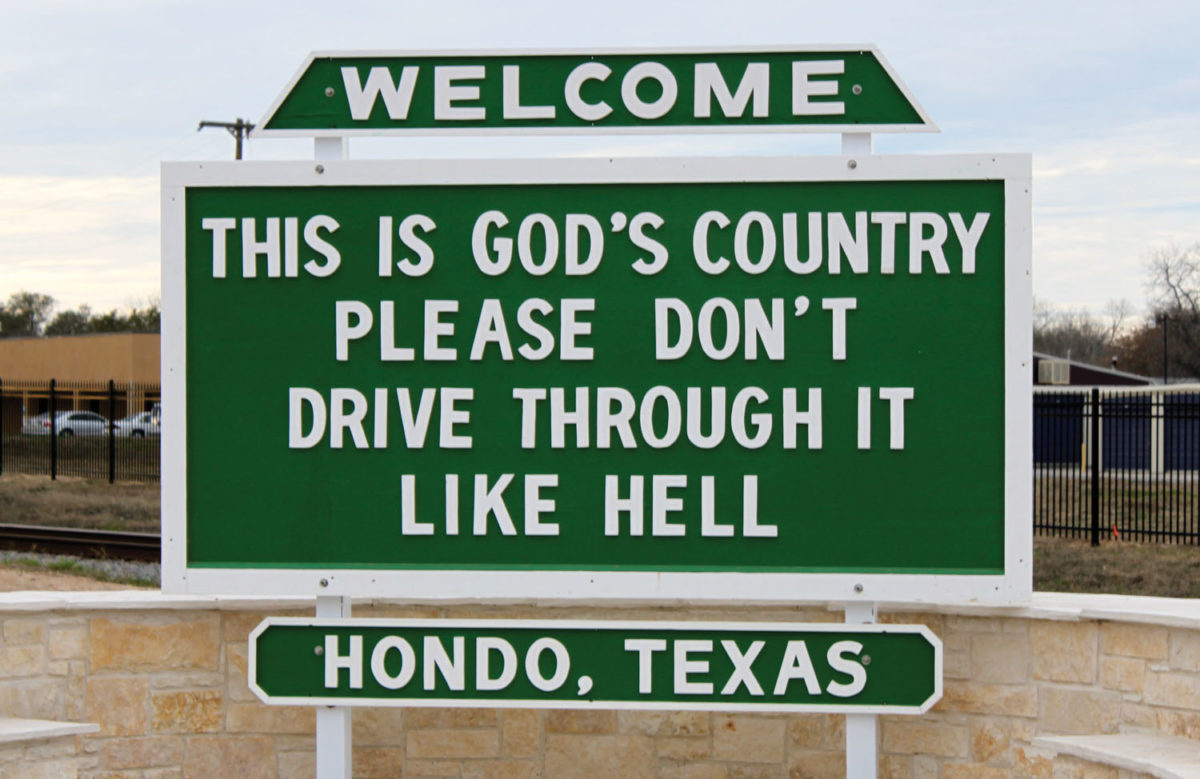 While some people know Hondo, Texas, as the birthplace and childhood home of Luckenbach’s Hondo Crouch, most of us know it because of the rather famous signs along highway 90 at either end of town.  And it is probably a good bet that if you don’t live in the area, your only experience with Hondo is as a milestone on the way to Garner State Park.

I was passing through town, not on my way to Garner but rather to Marathon in Big Bend country, when I decided to stop at the Sonic to share a couple of cheeseburgers and a diet cherry limeade with my ever-hungry running buddy, a Labrador retriever.  We were sitting outside at a picnic table and eavesdropping on a family sitting nearby.  Apparently the parents were trying to convince their thirty-something son that he should move back home to San Antonio.  Through the conversation, I was able to determine that he lived there in Hondo and worked as a night produce manager at the local HEB.  His parents seemed disappointed at both his choice of job and home.  They said he should be able to do much better than that given he had a college degree, and they practically begged him to come back to the city where good jobs were more plentiful.  He replied that he wanted to live in Hondo because from there it was a short trip to both Concan and Bandera, two places he seemed to be rather fond of.  They kept reminding him of the fact that he could probably find a better job in the city.  The repetition became tedious even for me.  I could only imagine what he must have felt and how many times he had heard this before.

Failing to get through to him with their first ploy, they even tried asking him to consider taking a job in the city and commuting the 45 minutes or so to and from work.  He balked at the idea of giving up an hour and a half of his day driving to work.  He said that was time he could spend in much more pleasant endeavors.

As my dog and I were leaving, I heard him say that he would rather work in a grocery store the rest of his life than live in the city.  For me, the conversation was mercifully over.  I’m sure he wasn’t so lucky.

I think most of us understand that millennials, those reaching adulthood around the turn of the century, think differently than the baby boomers or generation X-ers who came before them.  While we older ones work long hours and often take our work home with us, millennials give a good eight-hour effort and then, when the day is over, it’s over.  Work is completely out of their minds.  There is a total separation between work and life.  We boomers went where the jobs were—lived where we had to live to get those jobs; the millennials decide where they want to live and then find a job there.  They feel that life is too short, or too important, to let work dominate or dictate major life decisions.

I would imagine that this pattern of questioning the values of a younger generation is not unique to boomers and gen X-ers.  Throughout history, each generation has looked at the ones coming up after them and seen young people who they view as somehow inferior.   Most of the time they have been wrong.   I think my generation might be the exception.  As boomers, our parents were from what is often called “the greatest generation.”  Perhaps they were right in their view of us.  While they went down in history as the greatest, we boomers are likely to go down in history as the most pathetic generation.  Look at how we have taken the world we were given in the fifties and early sixties and changed it into the world we see today.  History will not look kindly on us for that.  But even in spite of our own shortcomings, like all generations before us, we tend to see the millennials as lazy and prone to making irrational decisions.  We think they should spend more time and effort bettering themselves and planning and preparing for their future.

Personally, I have mixed feelings on this.  There are times when I lament time I have wasted.  I wish I had begun earlier with savings, retirement planning and home ownership.  I’m sure that would have made my parents rest easier.  It certainly would have made retirement more realistic.  But then, at other times, I think about the time I spent in Guadeloupe, Martinique, London, Paris, Oxford and Cozumel and wish I had done more of that.

But you can only dwell on the past for so long.  Eventually you have to think about the future—and the diminishment it will bring.  I already see signs of it physically.  I am beginning to realize that things I used to do easily are becoming more and more difficult.  I did the South Rim hike in a single day in my 40s and 50s.  Today, I’m not sure I could do that, even if I didn’t have to carry a backpack. I know it is probably inevitable that, should I be fortunate to hang around the planet long enough, I will no longer be able to keep living in my house and keep all of the many things I love.  My library alone would over-fill most apartments in “senior living” complexes.  As we begin the downward slope on the bell curve that is life, it is only natural to ask if it was worth all that effort we put in to gather all this “stuff.”

The French have a philosophy called La Vie Dansante.  There is no equivalent phrase in English, probably because English-speaking people just don’t think this way.  Language always reflects the thinking of a culture.  A word-for-word translation is “the dancing life” though it has nothing to do with dancing.  The closest equivalent I have been able to come up with is something like “life is too short to spend any part of it doing anything other than having a good time.”

I’m beginning to think the French, and that young man at Sonic, may have had the right idea.  When you think about how short our time here is and the way it will ultimately end, I wonder if we should be thinking less about tomorrow and more about tomorrow’s yesterday.  All things considered, La Vie Dansante may be the wiser choice in the long run.

And we will probably be wrong.