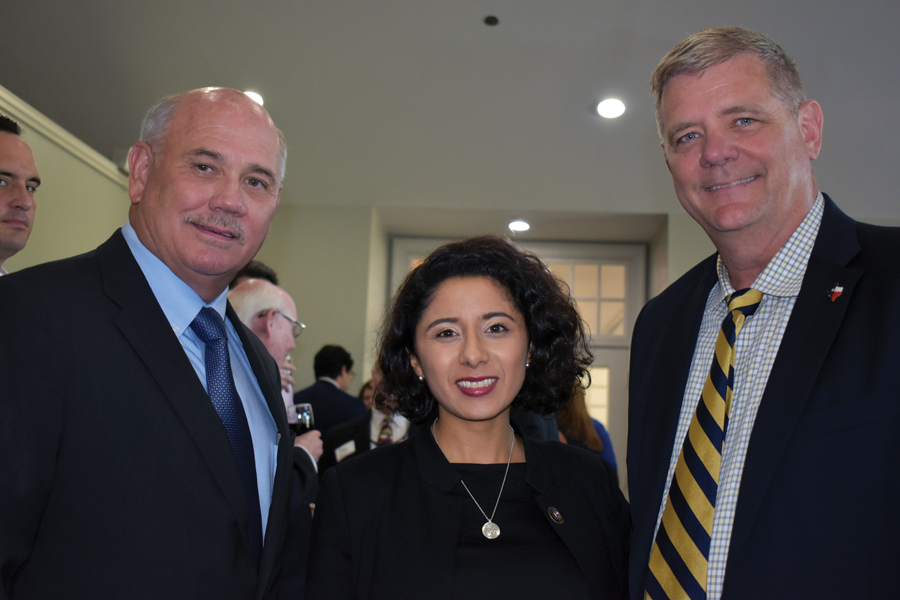 The Bay Area Houston Economic Partnership hosted its annual State of the Counties meeting at Bay Oaks Country Club, where both Galveston County Judge Mark Henry and Harris County Judge Lina Hidalgo impressed their audience with their affable presentations that spoke of the opportunities and challenges of these rapidly growing counties.
Judge Hidalgo was quick to point out that “we can’t avoid the topic of flooding and flood control coming out of Imelda. I want you to know that that is the No. 1 priority for us in Harris County. For the first time, we’re truly putting science and people first. There are tough decisions that we have to make.

“We’ve hired an independent, outside group to come in and help us figure out how we can do things faster. We’re moving forward as quickly as we can. What was going to take 10-15 years is firmly at 10, but limitations such as environmental permitting and right-of-way acquisitions take time.”

She added, “We’re moving the drainage project in unincorporated Harris County forward to 3½ years instead of 5, which means two hurricane seasons faster. Our Flood Control District is very focused on innovation. If we don’t change the way we do things pretty dramatically pretty soon, it will affect the competitiveness of our region and everyone’s ability to thrive.”

Judge Hidalgo also discussed the coastal barrier and thanked BAHEP for its advocacy work. “It is such an important project. We can’t just hope that we don’t get a direct hit (from a hurricane).”

She also stressed the importance of being good stewards of the county’s $5 billion budget for this fiscal year, closing her remarks by saying, “Our ability to work together is going to continue lifting all of us. Count on me as a partner in the work that you all have done and continue to do.”

GALVESTON COUNTY
Judge Henry opened his remarks declaring, “The economy in Galveston County is doing great. The population is expected to grow seven percent over the next 10 years. Employment is expected to grow over eight percent. We are growing at such a pace that it is difficult to keep up.

“The county has been very successful in its conservative budgeting. The tax rate is where it was in the late 1990s. This gives the county a AAA bond rating making the county government very stable,” he said, going on to note that a county-wide drainage study is underway. Updated flood information was received from NOAA and the county is trying to get FEMA to adopt NOAA’s information to get a better idea of what flooding may look like in the future.

Transportation is going to be a big issue, Henry said, expressing his concern about viable hurricane evacuation routes out of Galveston County. He spoke of the Texas Department of Transportation’s decision to keep the southern sections of the Grand Parkway in its Unified Transportation Program. Henry said, “The Grand Parkway will be a major economic driver in the region, but it’s also another evacuation route. This was my No. 1 point in talking with TxDOT.”

Henry said he is constantly working with companies interested in relocating to Galveston County, “where thousands upon thousands” of acres are available at less than $1 per square foot with deep water, rail, and interstate access. Meanwhile, he expects 1.9 million cruise passengers will pass through Galveston Island, which expects 7.2 million visitors during 2019.

Businesses know they can count on Galveston County to be predictable, fair, and consistent, he said in closing, adding, “We are open for business.”