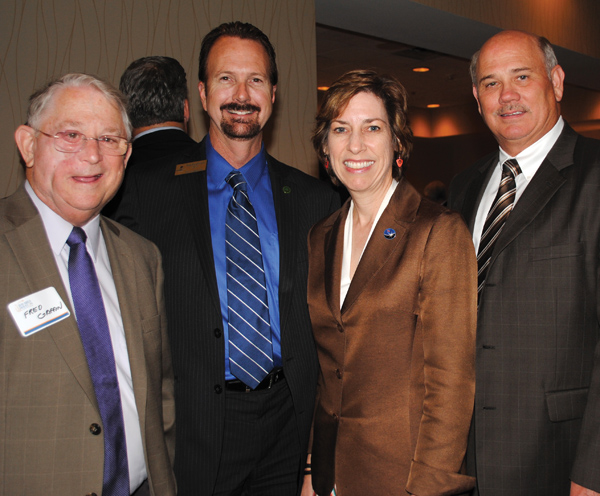 The space shuttle may be retired but not the Johnson Space Center workforce.

Instead of arranging shuttle trips to the International Space Station, work at the center is focused on ferrying supplies to the ISS, possibly landing on an asteroid and testing new spacecraft for journeys into deep space, new JSC Director Ellen Ochoa says.

In other words, they have plenty on their plate. And, oh yes, dealing with federal budget cuts.

Speaking to the Bay Area Houston Economic Partnership, she explained that the next step for Orion, which was specifically designed to take us beyond low Earth orbit, will be its first flight in 2014 with its first joint test flight with the rocket that will be used for the space launch in 2017.

Meanwhile, JSC continues its partnership with 15 countries running the space station, doing research into medicine, material science, even earthquakes, that is beneficial to people back on Earth and serving as a test bed for medical experiments, she said.

Biggest problem is, of course, the 13 percent cut in the budget, with more expected.

“However, given all the constraints on the federal budget, I think NASA and JSC did well,” she said, adding that they “did not account for sequestration, so obviously that is one of the things we will have to follow closely in the next few months.

“Certainly, it did have an impact on us and we still don’t have the final numbers. But we did take a five percent cut across NASA with sequestration. Despite not having the final numbers, we do think we can continue with Orion and the ISS this year as planned. However, between now and next year, overall we are expecting to take about a 13 percent cut in our maintenance and operations budget at JSC.”

To meet this, she said, JSC had closed one of its gates, cut back on its custodial staff, and cut out salary increases. “It’s been a lot of little changes like that, but my goal is to preserve those things that are most important such as human space flight.”

Along the way, the cuts have resulted in the loss of 200 civil servants with a projected 52 more needed each of the next three years. “It also affects many of our contractors.

“Now the goal is to do things differently, reaching out and forming partnerships in many different directions so we can continue to move human space flight forward.”

The asteroid is about 40,000 miles on the other side of the moon – which is about 250,000 miles from Earth — and would take about four to five days to reach, she said in response to a question from the audience at the conclusion of her speech.

On a personal note, Dr. Ochoa told how she had lived here in Clear Lake for the past 23 years, that her husband, Coe Miles, is a former engineer who had become an intellectual property attorney. They have two children, ages 13 and 15.