Rhythms on the Bay: JR Ancira 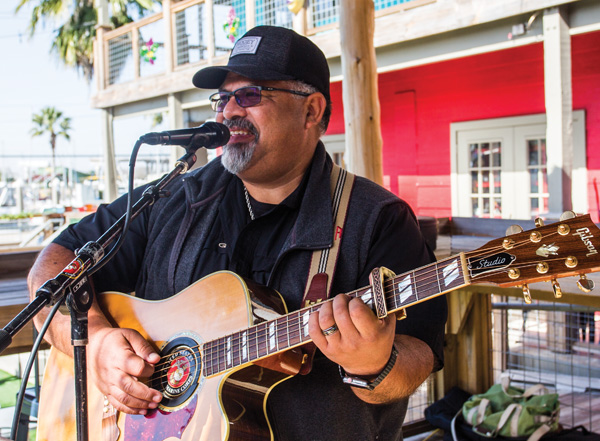 In his song, “In My Soul,” JR Ancira proclaims that “Country is not something I learned; it’s in my soul.”  With every note he croons and chord he strums, JR lets us in to see his soul and his heart.  For this local singer-songwriter, performing about what he knows and loves keeps truth in his music while giving listeners a glimpse of who he is: a hard-working husband and father who uses music to reach out to people.

JR performs weekly on Sundays at Voodoo Hut in Kemah, Texas during Cat Scratch Kitchen’s luscious brunch on Sundays as well as other Clear Lake venues.  His one-man act features his well-adorned Gibson acoustic guitar and his captivatingly clear voice that draws in the crowd with both power and emotion.

JR likes the oldies from Merle Haggard to Charlie Pride.  He gave his nod to two Waylon Jennings tunes at brunch, “Good Hearted Woman” and “Just a Good Ol’ Boy” to the delight of the audience.  JR added a chance for a sing-a-long and a giggle with “Where, Oh, Where Are You Tonight?” that everyone gleefully joined in.

Growing up Hispanic in Aransas Pass, JR was surrounded by Tejano music, but his heart took him to country.  Those songs of the working man, heartbreak, and struggle resonated with him and reminded him of his dad, a man far from perfect who battled demons while he tried to support his large family as best as he could.  From a young age, JR found solace in music, singing in choirs in church and at school.  He was a young, polished country singer and guitar player by high school and started playing with local bands.

JR heeded the call to serve his country so joining the Marine Corps and then the Army.  While in the Corps, he would play his country tunes in the local California honkytonks, safe havens that reminded him of home, meeting some of the nicest people he had ever known.  Folks responded to his music:  those who wanted to get away from the daily hustle, blow off some steam, or find some liquid comfort.  They reminded him of the George Jones song that says, “The only thing different in sinners and saints, One is forgiven and the other one ain’t.”

JR had the unique opportunity of being selected as the lead singer for Ft. Hood’s First Calvary Division’s Country Show band after he switched military branches to the Army.  Wearing their signature black Stetson hats, he and the band toured different bases across the country, feeling honored to share music with fellow soldiers.

After years of active duty, JR returned to civilian life where he continued to work on his music while holding down a day job as a contract inspector in the oil and gas industry.  Ironically, while he was laid off during 2020 due to COVID from his contractor position, it was musical gigs that kept money flowing in.  Now back at work, JR still is out singing and playing to appreciative audiences on evenings and weekends.

JR likes for his music to “bust the window open to your soul.”  He wants to connect with his audiences, even chatting with customers during his breaks to get ideas for next set.  JR sees his talent as a gift he can share with others, reaching out to those in dark places to soothe and counsel them.  Because he views his music ability as being from God, he says that the profit is becoming the [musical] prophet.  He strives to make his mark one gig at a time, leaving a good lasting impression by giving his all in every song.

So, as JR wrapped up his set with fellow Texan George Strait’s, Troubadour, we can all see how he will be singing to us as long as he can.  And we are grateful.

Find out more about JR Ancira and his music at www.jrtexas.com and follow him on Facebook at J.R. Ancira.