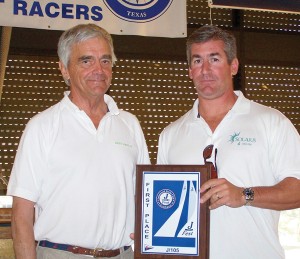 “The Johnstone family has made an undeniable mark on the world of sailing, “ remarked Goethe.  In addition to the 5,400 J/24’s cruising the waves, there are over 7000 more J/Boats ranging from the International J/22 to the new J/70 Speedster that sailing enthusiasts have bought at prices ranging from $10,000 to $2,000,000.

The story began in 1975 when Johnstone, then an ad salesman for the sailing trade magazine Soundings, decided to build a sailboat he had been designing since the 1960’s.  With $400 worth of fiberglass and wood, he built the 24’x9’ RAGTIME on weekends in his 3 car garage at home in Stonington, Connecticut.  During the summer of 1976, with an all family crew aboard, RAGTIME beat everything in sight.  Johnstone realized that he had created something special, and the story continues today.

“The overall theme of the J/Fest Southwest Regatta, which is being sponsored by Scott and Terry Spurlin of J/Fest Southwest, is to provide a venue that is all inclusive to J/boat owners, their family, and friends,” explained Goethe.  While racers are on the water, spouses, children and friends can enjoy a myriad of activities and tourist attractions in and around the Bay Area Houston arena.  Brochures outlining these activities will be included in the skippers’ packets.

“Since the city of Seabrook is our title sponsor for our J/Fest Southwest Regatta, we hope that visiting racers and their families will take advantage of the fine facilities that the city has to offer,” added Fleet Captain Joyce Maxwell.

For further information and to register for the regatta, check www.JfestSouthwest.com