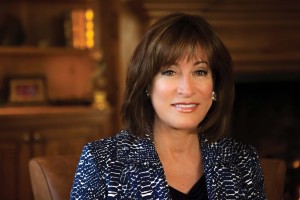 During the meeting, which was held in the Port’s Executive Office Building boardroom, both Houston Mayor Annise D. Parker and County Judge Ed Emmett lauded the Port Authority’s performance under Longoria’s leadership.

“I want to salute all of your board members and you for the great results that the Port has achieved over the past two years,” Parker said.

Mayor Parker highlighted the recent centennial celebration for the Houston Ship Channel, as well as the importance of the Port and the need to continue to seek support for infrastructure improvements around the Port.

Emmett, who is a recognized transportation expert, said the ship channel and Port are vital to the region, and he indicated strong leadership is crucial.

“Clearly the Port of Houston is one of the great ports in the world and has great leadership,” Emmett said. “So a lot of that is attributed to you (Longoria).”

Longoria noted the Port Authority achieved record results in years 2013 and 2014 and is poised as well for a solid 2015, going on to point out the ongoing importance of partnership with the city and county, as well as other stakeholders.

“Thank you for your confidence in my leadership,” Chairman Longoria told the elected representatives. “It takes a team to execute a vision and through the continued support of the Port Commission and the excellent work of Executive Director Roger Guenther and staff, we have the opportunity to make the second century of the Houston Ship Channel as remarkable as the first.”

She has served on the Port Commission on behalf of the City of Houston since September 2002 and was appointed chairman in 2013. Port commissioners serve two-year terms without pay.

She currently serves as chairman of both the Port Commission’s Audit Committee and Dredge Task Force and is a member of the Governance and Pension and Benefits committees. She created the Chairman’s Citizens Advisory Council to provide an open line of communication between communities in and around the Port of Houston, and the Port Commission. A Business Advisory Council was also created to obtain needed input from industry stakeholders.

She has received considerable recognition for distinguished service, including the 2008 Sandra Day O’Connor Board Excellence Award. She received the Female Executive of the Year Award from the Houston Hispanic Chamber of Commerce (2010) and was recognized as a “breakthrough woman” and inducted into the Hall of Fame by the Greater Houston Women’s Chamber of Commerce.

She also serves as the chairman of the Board of Pilot Commissioners for Harris County Ports.