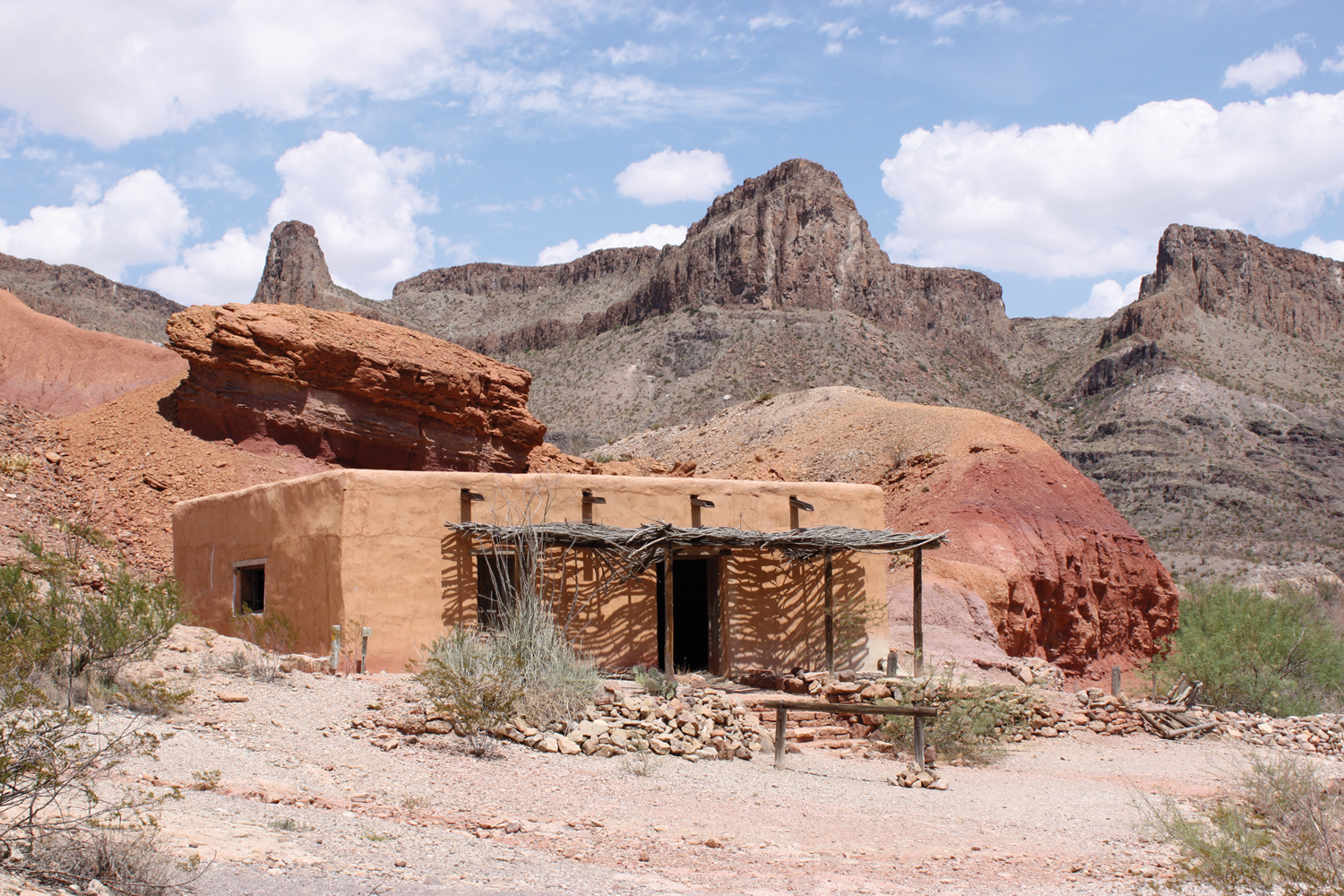 A lot has been written about the most beautiful drives in Texas.  Most people include on their lists the Willow City Loop near Fredericksburg when the bluebonnets are in bloom and the River Road between New Braunfels and Canyon Lake. There is almost unanimous agreement that the number two most beautiful drive in Texas is the three sisters (Ranch Roads 335, 336 and 337) from Vanderpool, through Leakey and on to Camp Wood.  And number one on just about every list? Of course, El Camino del Rio (FM 170) that runs along the Rio Grande from Lajitas to Presidio.  The run from Lajitas to the Santana Mesa Overlook just beyond the teepees at the roadside picnic area is particularly spectacular. So on about a third of my trips to the Big Bend area, and every time I take a first-timer, I take an afternoon to enjoy the drive.  On several previous trips I had noticed a sign indicating a “Contrabando Movie Set” but I always passed it by.  On this trip I had plenty of time to kill so I thought, “Why not?”

To me, movies have always been sheer magic.  The ability of the cinema artists to create creatures and settings that I know don’t exist, yet look so real, has always fascinated me.  I had seen this particular “town” before in the movie The Streets of Laredo and in the Brooks and Dunn video “My Maria.”  But here, on the actual set, I was disappointed.  I found myself wondering how I could have possibly seen this place as real in those works.  It just didn’t work for me now that I was really here.  I could easily tell that everything was fake.  I couldn’t tell for sure what the real composition was, but it looked like stucco over chicken wire.

That got me to thinking about just how the artists made something like this look so real on the screen.  What is the secret behind that feat?  Was it computer-altered?  Did they play with the lighting?  How did they make this place look like a real frontier desert town 150 years ago—like Boquillas looks today?

Before I left, I took a few photos of the buildings on the set anyway.  The “town” may look lame, but at least I would have a few photos as memories of an unproductive side trip.

But long after I left, the dissonance remained.  Why did something so clearly fake convince me on the screen?  Whenever I am faced with questions like this, I generally “think out loud,” mulling over my concerns and questions.  Unfortunately for him, my best friend Kevin is generally the victim of these ruminations.  So later that night, I gave him a call.

Kevin is an engineer and has a strong scientific orientation, so I was somewhat surprised to hear him say he believed that sometimes it is better not to know how things are done.  His experience had been that once you know, it loses the magic that made it so special in the first place—sort of like finding out how sour cream or hot dogs are made.

At first the artist side of me had a positive reaction to that.  My right brain understood the magic of creativity.  But deep down, I too have a fairly strong scientific orientation.  As I spent more time thinking about what Kevin said, I began to think that he had to be wrong.  At least some of the time, understanding how things are done makes you truly see what is magical in our world—magic you would have never known existed if you didn’t understand the workings behind the scene.

Consider the memory system in the first and second-generation computers.  Physically, the core memory unit was a large square frame box with thousands of small wires running from top to bottom, lined up in rows from front to back.  Thousands more wires were strung running from left to right, again lined up in rows, front to back.  None of these crisscrossing wires actually touched, but they came very close to it.

Wherever two wires “near-crossed”, a little metallic donut circled the juncture.  To store something in memory, the donuts were magnetized or not (1 or 0).  How do you magnetize the right donut in this matrix of thousands of donuts?  You shoot 55% of the electricity needed to magnetize down the vertical wire that intersects the donut and 55% of the electricity needed down the horizontal wire that intersects.

The result is that in only one place in this massive structure is there enough power to magnetize a donut, and that is where the two wires near-cross.

Now here’s the magic.  As we look at it now, this design is so simple, elegant and easy-to-understand.

And yet, who would think of such an approach to the problem of computer memory?  What kind of a mind comes up with something like this?  What happened in that guy’s head sure feels like magic to me.

Or even more so, try out the one of the early methods of detecting whether a fetus would have the genetic disease cystic fibrosis.  Before genome work, one way researchers could determine if the baby would have cystic was to take a sample of the amniotic fluid from the mother’s womb and put it on a live clam.

If the cilia in the clam stop moving in 30 minutes, the baby would be born with cystic.  Again, simple, elegant, and it makes perfect sense.  Among other complications, cystic fibrosis clogs the alveoli in the lungs.  Cilia are some of the smallest structures commonly available in living organisms.  It stands to reason that what will clog the alveoli later will clog cilia more quickly.  But again, what kind of a mind thinks like this?

After I got home I loaded the pictures into the computer.  When I took my first look at the photos on the full screen, I was stunned.  They were magnificent!  They looked as real as the town looked in the movie and video.  But I was there in person; I took those photos. I know the “town” didn’t look like that at all.  Yet here it was on my computer screen—as real as it could be.  How did that happen?  How did my photography skills, lame as they may be, make that happen?

It took me several weeks to figure it out…and I’m still not positive I have it right, but I’m pretty sure it has nothing to do with my abilities as a photographer.  I think what is happening is the man who designed and built the Contrabando movie set had the uncanny ability to see, not with human eyes, but with the eye of the camera—an ability I clearly lack.  He could see what the camera would see and he built accordingly.  The photos I brought back give strong evidence for this interpretation.

Life is a never-ending process of learning.  As a child, I sometimes found it to be a chore.  There were a few things I found interesting, but for the most part, learning was work, pure and simple.  I’m sure a lot of other people have viewed school that way as well, at least for a while.  But at some point in life most of us figure out that learning isn’t really work at all; it’s fun.  Let’s face it, we all love magic.  I guess the more I learn about how things in the universe work, the more magical it all becomes.

I think it’s time to take apart that old-time crystal radio I have in the attic.  I always wondered how that worked.