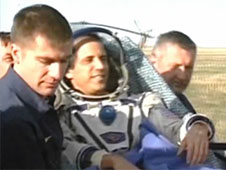 Joe Acaba is carried by personnel to a medical tent for a checkup after landing.
Credit: NASA TV

Three members of the Expedition 32 crew undocked from the International Space Station and returned safely to Earth on Sunday, wrapping up a mission lasting more than four months.

Flight Engineer Joe Acaba of NASA, and Commander Gennady Padalka and Flight Engineer Sergei Revin of the Russian Federal Space Agency, undocked their Soyuz TMA-04M spacecraft from the space station at 7:09 p.m. EDT and landed north of
Arkalyk, Kazakhstan, at 10:53 p.m. (8:53 a.m., Sept. 17, Kazakhstan time). The trio arrived at the station May 17 and spent 125 days in space, 123 of which were aboard the orbiting laboratory.

After the Soyuz spacecraft separated from the space station, NASA astronaut Sunita Williams took command of Expedition 33. Williams is only the second woman to ever command the station. She and her crewmates, Russian cosmonaut Yuri
Malenchenko and Akihiko Hoshide of the Japan Aerospace Exploration Agency, will work aboard the station as a three-person crew until the arrival of three new crew members, including NASA astronaut Kevin Ford, in mid-October.

Acaba, Padalka and Revin orbited Earth 2,000 times and traveled 52,906,428 miles. Padalka now ranks fourth for the most days spent in space — a total of 711 days during four flights.