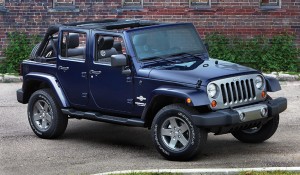 As a tribute to U.S. military members past and present, the Jeep brand has created the new 2012 Jeep Wrangler Freedom edition. Available in red, white or blue, this special edition features a military-inspired star decal on the hood and rear quarter panels, along with an “Oscar Mike” (military jargon for “on the move”) fender badge.

The new limited-edition 2012 Jeep Wrangler Freedom model is based on the best-selling Sport model, and is available as a two-door Wrangler or four-door Wrangler Unlimited model. It is offered in three colors only: Deep Cherry Red, Bright White, and new True Blue that for 2012 is exclusive to the Wrangler Freedom edition model. 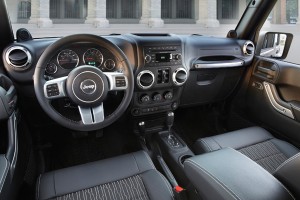 The new 3.6-liter Pentastar V-6 engine delivers 285 horsepower and 260 lb.-ft. of torque, while delivering up to 21 miles per gallon highway

2013 Chevy Equinox Gets More Power – in Horses and Intelligence

The Chevrolet Equinox rolls into 2013 with a new, more powerful 3.6L V-6 engine, Chevrolet MyLink Radio with Navigation and other features that will help maintain its momentum as one of the industry’s most popular small crossovers. 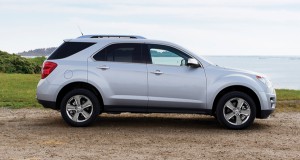 If you are tired of puny 4 cylinder engines that strain to pull away from the stop light or uninspired 6s that suck gas, the new, direct-injected 3.6L V-6 will put a smile back on your face. Not only does the 301 horsepower power plant deliver 14 percent more horsepower than the previous V-6, it delivers the same EPA-estimated fuel economy – including 24 mpg on the highway.

Chevrolet MyLink adds another dimension of power to the 2013 Equinox, offering a higher level of in-vehicle wireless connectivity with an intuitive interface that is easy to use. MyLink integrates Internet radio stations using hands-free voice and touch-screen controls via Bluetooth-enabled phones. Navigation is available on the upper end models.

If crossovers from Toyota, Honda or Kia are on your shopping list, do yourself a favor and stop by the Chevy store to check out the Equinox. Starting at $23,530, it may get you thinking “American” again.

Listen to In Wheel Time on Houston’s 1560 The Game/Yahoo Sports Radio!

Tune in to 1560AM The Game every Saturday morning from 10am to 1pm for Houston’s best car radio show with experts Mike Herzing and Don Armstrong.