Have You Made a Hurricane Plan for Your Family?

Hurricane season is getting off to an early start this year, as we uncharacteristically already have a tropical system in the Gulf. While current forecast models are very uncertain, they show that Tropical Storm Cristobal could potentially affect our weather by late Sunday. It appears this storm will have a fairly limited impact on Houston, but it serves as a reminder that all of us should be thinking about our plans in the event a major hurricane heads our way this season. 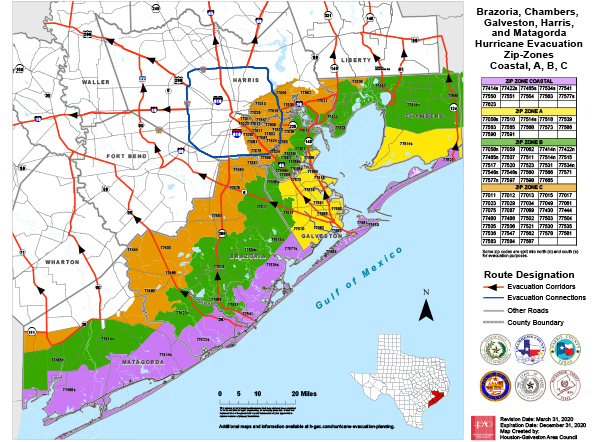 To Evacuate or Not?

In the event of a major hurricane, the most pressing question Houston area families will have to answer is whether they should evacuate or not. For most in the region, the answer is not.

We discovered in Hurricane Rita that there are very serious consequences from the decision to evacuate. Approximately 150 individuals died in the Rita evacuation. That is more people than have died in any Texas hurricane except the Great 1900 Storm.1
Most were elderly and died from stress-related afflictions. A few died from carbon monoxide affixation while sitting in an idling automobile. Of course, hundreds of thousands were trapped in miserable circumstances for many hours. While evacuation plans have greatly improved since Rita, she proved that evacuating entails some risks.

The State of Texas has designated areas along with evacuation zones. People who live in those zones should have an evacuation plan and be prepared to evacuate when the order is given. The zones are designated by zip code. Go to this website and determine if your home is in one of the mandatory zones.

The evacuation of these zones will be called from coast inland. With the more inland zones called as the storm surge forecast worsens. If you live in one of the State designated evacuation zones you must evacuate when ordered by local officials.

These are areas that have been identified as likely to be inundated by a hurricane’s tidal surge based on the storm’s strength. Residents of these areas have no choice. If officials call for their zone to be evacuated, they must, by law, leave. While generally emergency personnel do not arrest people and force them to leave, staying put in the face of an evacuation order will put you and loved ones at risk and potentially risk the lives of first responders if they are forced to attempt last minute rescues. In Hurricane Ike about 30 people died on Bolivar Peninsula after defying an evacuation.

So, for any of you that live in those areas and are thinking that you might ignore the evacuation order, think again. A hurricane tidal surge is like a tsunami that keeps coming for hours. As the surge destroys structures in its path, the flotsam created from that debris becomes a battering ram that flattens anything in its path. If you doubt this, go online and do a search for pictures of the Mississippi coast after Katrina like this one.

In the area hardest hit by the surge, it appears that God took his hand and wiped everything clean for a mile or so inland.

And the water coming at you is not pristine beach water. It has picked up everything in its path, including oil, sewer from over-run treatment plants, chemicals and dead animals. It is a filthy, polluted soup that can kill you. If you live in the surge zone and do not evacuate, you are seriously jeopardizing your life and your loved ones who live with you. 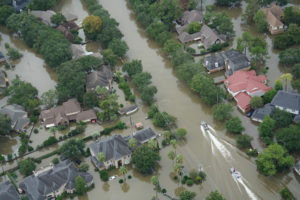 People Outside the Surge Zones

For the vast majority of residents who do not live in the hurricane evacuation zones, sheltering in place or, as Judge Emmett made famous during Hurricane Ike, “hunkering down”, will be the best option.

Most emergency managers often recite the adage, “run from the water – hide from the wind.” As a general proposition, this is good advice and supported by the statistical evidence that the vast majority of deaths in hurricanes are caused by drowning.

Absent special circumstances, you should not evacuate because you are concerned that you may lose electricity. If that is your only concern, you will be much better served by sitting out the storm to see if you lose service or not.

By waiting, you will have a chance to assess and possibly mitigate damage to your property. And then you if do lose electricity, you leave the area after the storm has passed and the roads are clear.
Not evacuating just to avoid an electrical outage is especially advisable when you consider the degree of forecast uncertainty. When Rita was just 24 hours from landfall, there was still only a one-in-four chance of a direct hit across almost 250 miles. Considering that an evacuation will be called 48-72 hours ahead of landfall, many calls for evacuation will likely be false alarms. If you evacuate every time a storm threatens because you are concerned that you will lose power, you may find yourself on the road a lot for no reason.
Rita Forecast 24 hours before landfall
There are, however, some dangers for those that live outside the surge zones if they stay in their homes from the wind and upland flooding. 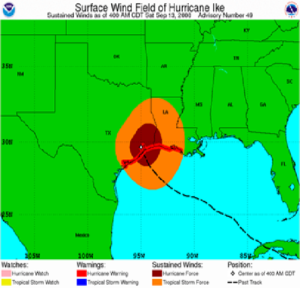 A Category 4 storm can have 100+mph winds extending as far inland as Montgomery County. This chart shows how far inland hurricane forces winds reached as Hurricane Ike made landfall.

Most structures can withstand these winds. But I took a helicopter flight over the path of Rita and saw many homes which lost their roofs and had significant water damage. A few that totally collapsed. And there are occasionally serious injuries and fatalities from wind-related incidents.

Mobile homes are particularly vulnerable to high winds. If you live in a mobile home and you are anywhere near the central wind cone, find other shelter.

Also, trees near your home can be a risk. When I took my helicopter tour of the Rita path it was hard to comprehend the number of trees that were blown down. Pine trees are particularly problematic. On that flight, I saw a number of instances where a pine tree had fallen through a house, cutting it in two like a knife going through a cake. If you have large trees in your yard (and in particular pine trees) that could fall on your house if they came down, and it appears you will be in the most severe wind cone, I would recommend that you find other shelter.

Also, be mindful that while a hundred-mile-per-hour wind might not blow down your house, it will pick up all sorts of things and turn them into lethal projectiles. Secure anything around your house that might be caught by the wind. This is particularly dangerous for homes that have large plate glass windows. If you have this situation and are unable to secure the windows with plywood or other protective covers, you might consider finding other shelter.

In addition to the wind, residents outside the surge should also consider their vulnerability to upland flooding. This is not the flooding that is caused by the hurricane pushing the Gulf of Mexico up onto land, but rather from the storm dumping torrential rainfall on the watershed and flooding the bayou system like we saw in Harvey. A strong tidal surge can exacerbate upland flooding by acting as a dam and not allowing the bayous to drain as they would normally.

Unfortunately, this type of flooding is virtually impossible to predict. But if you flooded in Harvey, you may want to consider having a sheltering alternative on higher ground, especially for slow moving storms.

With respect to these secondary risks, is it far preferable to find suitable shelter near your home rather attempting to evacuate the area entirely. Even in the best of circumstances, attempting to evacuate just the designated surge zones is going to be a difficult problem. The fewer people we have on the freeways trying to leave the area, the less the likelihood of another Hurricane Rita debacle. Consider friends or family nearby you could stay with until the storm passes.

Unfortunately, I have too frequently found that the media hypes the risk of approaching storms. By far the best source of information is Space City Weather run by Eric Berger and Matt Lanza. Their posts give realistic, “hype-free” descriptions of the likely effects of storms potentially approaching the Gulf Coast. For the somewhat more technically inclined, the National Hurricane Center’s website is also a good source. The NHC also has app that can be downloaded to smart phones.

But here is the really important point: make your plans now. Do not wait to decide if you are going to evacuate and where you are going to go as a storm is grinding down on us in the Gulf. We all tend to make poor choices when under stress and people around us are panicking. Also, while most storms originate in the Caribbean, which gives us nearly a week to prepare for their arrival, there have been a number of storms that originated in the Gulf giving us as little as 48-72 hours to make preparations.
Set aside some time to think about these issues.

Do the research and determine if you are in a surge zone or if your home is subject to some of the other risks I have discussed. Decide in advance at what level storm you will evacuate or seek other shelter. Make a plan regarding where you will go and what you will need to take with you. If you are going to shelter in place, plan what you will need to do to be ready. Make checklists. There are detailed hurricane checklists available from the Red Cross.

Twice in the last two decades, the Houston region has stared down a loaded gun barrel as both Hurricane Rita and Hurricane Ike were on a course to make landfall around Freeport; what forecasters refer to as the Scenario 7 Storm. In Rita’s case, it was one of the strongest Category 5 hurricanes on record. Even though Hurricane Ike came ashore as only a Category 2 storm, if it had made landfall 20-30 miles to the west, the storm surge could have easily been ten feet higher. The truth is that we have dodged two bullets. We now know that a storm making a catastrophic landfall for the Houston region is not just a hypothetical possibility.

We also know what a mess a full scale evacuation of the area can be. Even with the improvements made to the evacuation plans since Rita, evacuating up to 1 million residents is never going to be a pretty picture.

But you can minimize the effect of a major storm on your family by planning ahead. Do it today.