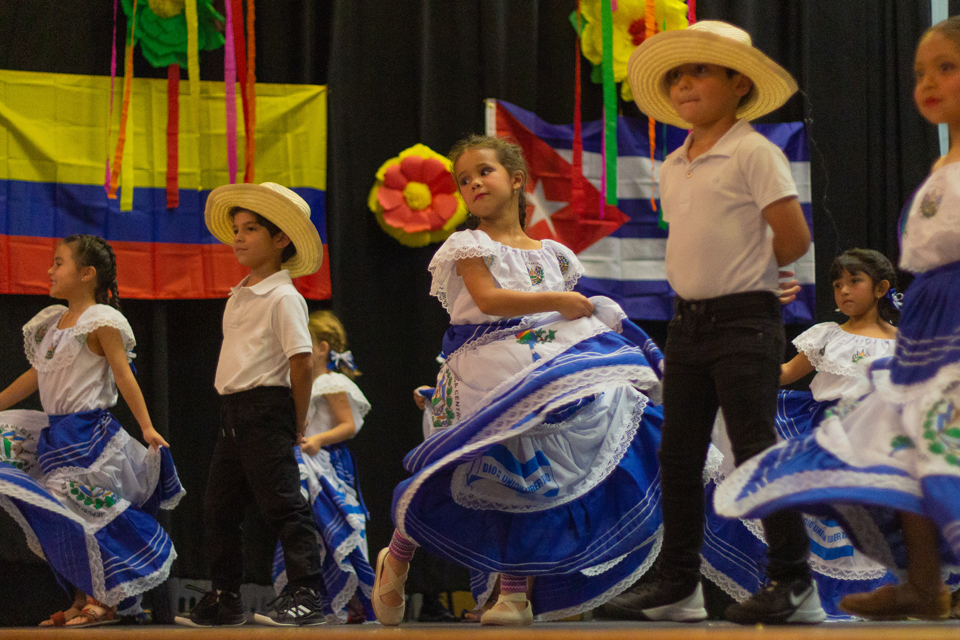 Colorful decorations made from tissue paper lined the walls and scores of papel picado hung from the ceiling as parents, children and staff made their way to the cafeteria to celebrate Hispanic Heritage and participate in Leadership Night afterwards at Stewart Elementary on Tuesday, Oct. 22.

New Principal Melissa Sanchez welcomed the oversized crowd, many of whom were standing, before recognizing the parents, teachers and volunteers who had helped to make the evening possible.

Then, students from Pre-K through 5th grade enthusiastically performed traditional dances to music from a number of Latin countries including Mexico, El Salvador, Venezuela and Cuba. For the grand finale, members of the Ball High School Dance y Ballet Folklórico based in Galveston stomped and twirled to a final Jarabe Tapatío, or Mexican folk dance. According to former Stewart Elementary Principal Dr. Britani Moses, the celebration has been around for over 20 years though it has grown in different ways over time.

“Originally, it started as Ballet Folklórico to honor the Mexican holiday of Cinco de Mayo,” she said. “Then as the years went on and more people from different countries started moving here, we decided to expand the celebration to include their traditions as well.”

Eventually, it also made more sense to have the event during or close to Hispanic Heritage Month since it had grown larger and was more inclusive of other Latin American countries. “The spring was always so busy anyway that we really wanted to have more time to do it well,” Dr. Moses said.

It is so popular that kids must now apply for a lottery in order to be chosen to participate.

Fourth grader Valencia Valdois performed in the Venezuelan dance this year, making it her third time overall to be included. “I like it because I get to make new friends,” she said. Others appreciate the opportunity to dress up and put on a show. “My favorite part was to see a lot of people looking at us,” said kindergartner Perla Colón. “There’s lots of different songs too.” But the children aren’t the only ones who want to be involved.

“About three years ago, the parents really stepped up and took it upon themselves to teach the children the songs and how to dance to them,” Dr. Moses said. Starting in September, the children practice twice a week to prepare for the October performance.

While it is the second year the Hispanic Heritage event was held in the fall, it was held in conjunction with Leadership Night for the first time.

The Leader In Me program, grounded in Stephen Covey’s 7 Habits of Highly Effective People, is a school-wide transformation that develops the next generation of leaders with its focus on culture, academics and leadership. Stewart implemented the program for the first time earlier this school year.

Students and their parents could visit various rooms throughout the school and learn about different topics while also engaging in hands-on activities, which incorporated concepts like math, literacy, science and character. In the gym and cafeteria, multiple tables were set up by grade level and projects ranged from making name rockets and volcanoes to writing get well cards to be given out at a local pharmacy and painting kindness rocks. In the auditorium, students had a chance to win a free book during a “book” walk in the auditorium and books were available for purchase during the book fair in the library. There was also a petting zoo made possible by the Living Materials Center.

The Leader in Me program at Stewart is made possible through the financial support of the City of Kemah with additional support from the City of Clear Lake Shores.