Help is on the way, ever so slowly 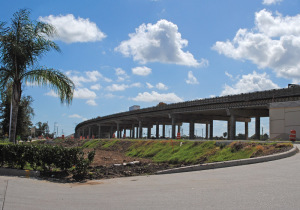 Big plans ahead for Highway 146 from Seabrook to Kemah

Every day we find ourselves stuck in traffic. But help is on the way, and one of these days we’ll be in our vehicles, sailing along like speedboats across Galveston Bay.

One of the biggest projects – the Texas Department of Transportation’s $311 million widening of the Gulf Freeway from 6 to 10 lanes is still more than two years from completion, but once the interchanges are built, the wider feeder roads are accessible, the new lanes are added and the work is all done, we should be able to travel the speed limit and get where we’re going without much effort.

Help for Five Corners
Help is also on the way for the area’s busiest intersection – Five Corners in League City, where FM 270 (Egret Bay Boulevard) intersects with FM 518 (Main Street) and FM 2094 (Marina Bay Drive) and hundreds of vehicles wait and wait and wait – sometimes sitting through two and possibly three red lights before they are on their way during rush hour.

Or trying to make their way from South Shore Harbour when football games are played at Veterans Stadium.

The road is also the only road connecting Clear Lake and League City between Highway 146 and Highway 3.

League City has finalized a plan it calls the Five Corners Realignment project, which will build a road from FM 518 over to FM 270, setting aside $7.9 million for environmental approval, right-of-way purchase, and construction. The new road will cross FM 2094 and go around the corner gas station and link up with FM 270.

SH 146 nears reality
While the State Highway 146 expansion project is needed now, TxDOT does not expect construction on the three-mile segment from Red Bluff Road through Kemah to begin until 2017.

That’s how long the state agency expects it will take to draw up design plans, notify businesses that a portion of their business is needed to build the new roadway and for right-of-way acquisition. Construction of the $200 million project will take about three years and will include a second expressway bridge across Clear Creek Channel, which links Clear Lake with Galveston Bay. TxDOT said It will be built west of and parallel to the Seabrook-Kemah Bridge, which will remain and serve as a frontage road for motorists.

Specifically the project will:

At this point, the focus is on Union Pacific, which has been asked to sell a portion of the railroad’s right-of-way along the Seabrook Industrial Lead.

TxDOT said “Union Pacific has an extensive review process for these types of requests. The process considers all current and likely future use of the rail line, including a thorough review of current leases on the line.”

Meanwhile, the City of Seabrook is working to find new homes for the businesses that will be displaced.