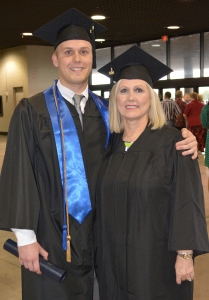 During University of Houston-Clear Lake’s 2014 Commencement Ceremonies, one family celebrated big when Scott Allen graduated during the noon ceremony with a Bachelor of Science in Healthcare Administration and his mother, Cindy, crossing the stage at the 5 p.m. ceremony, earned her Bachelor of Science in Behavioral Sciences.

While many families get excited when a loved one crosses the stage to get his/her college diploma, the Allen family doubled that enthusiasm by having two members of the family earn bachelor’s degrees on the same day during the two University of Houston-Clear Lake Commencement Ceremonies.

Cindy and son, Scott, will never forget the day they received their diplomas.

“Graduating at the same time was not a grand plan,” says Cindy, who returned to UHCL at age 51 to complete her long-time dream of getting a bachelor’s degree. “But, it sure is exciting that it happened this way.”

Having received an associate degree in Spanish from San Jacinto College approximately 30 years ago, Cindy says that at that time, life was busy. Her initial goal was to receive a bachelor’s degree in elementary education, but as a young married mother of one with another on the way, and a full-time job, she found herself unable to meet that goal.

Some circumstances in her life changed and the mother of three grown sons, with the encouragement of family and friends, decided to finally return to UHCL and finish that long-awaited goal of receiving a college education.

“As a young adult, I wanted to assist children with their education and become a teacher” explains Cindy. “That dream never died and during these last 3 ½ years, my determination of completing a bachelor’s degree in behavioral science has made me realize that I still can help students with their education, but in other ways.”

She is already putting into practice her goal of working with young people, having accepted a job in August as a site coordinator at Park View Intermediate in Pasadena in the ACE 21st Century after-school program. This is a job that she is passionate about and one that aims to enrich the lives of the 180 students enrolled in the program.

Scott, meanwhile, always had an interest in health care and knew a career in the field would be in his future. But, when he made it to UHCL, he really found his niche and changed from his original plan for a biology degree to the healthcare administration program offered through the university’s School of Business.

“My ultimate goal is to be a hospital CEO,” says the ambitious Scott. “I plan to go on for my combined Master of Business Administration/Master of Healthcare Administration degree, but want to take a little time off to work before launching into the graduate program.”

As a young boy, Scott says he always knew he would attend college – something that had been instilled in him his whole life. While in high school, he began working at a multi-specialty clinic through a co-op program. He eventually began full-time employment with the company working in medical records, which he continued throughout his college career.

His full-time workload and full-time class schedule did not keep him from being active at the university outside the classroom, and he just finished serving as vice president of the Healthcare Finance Association, a student organization affiliated with the national Healthcare Financial Management Association.

Although Scott says he is thrilled to be graduating, his thoughts are focused more on his mom’s achievement.

“I’m so happy for her – I’m more proud of her than I am of myself.”Two other Allens have already experienced the joy of commencement at UHCL. Keith received a Bachelor of Science in Management in 2010, while Ryan received a Bachelor of Business Administration in Marketing in 2004. But, on Sunday, the day belonged to their brother and mother.