Good news comes in bunches at CCISD School Board meeting 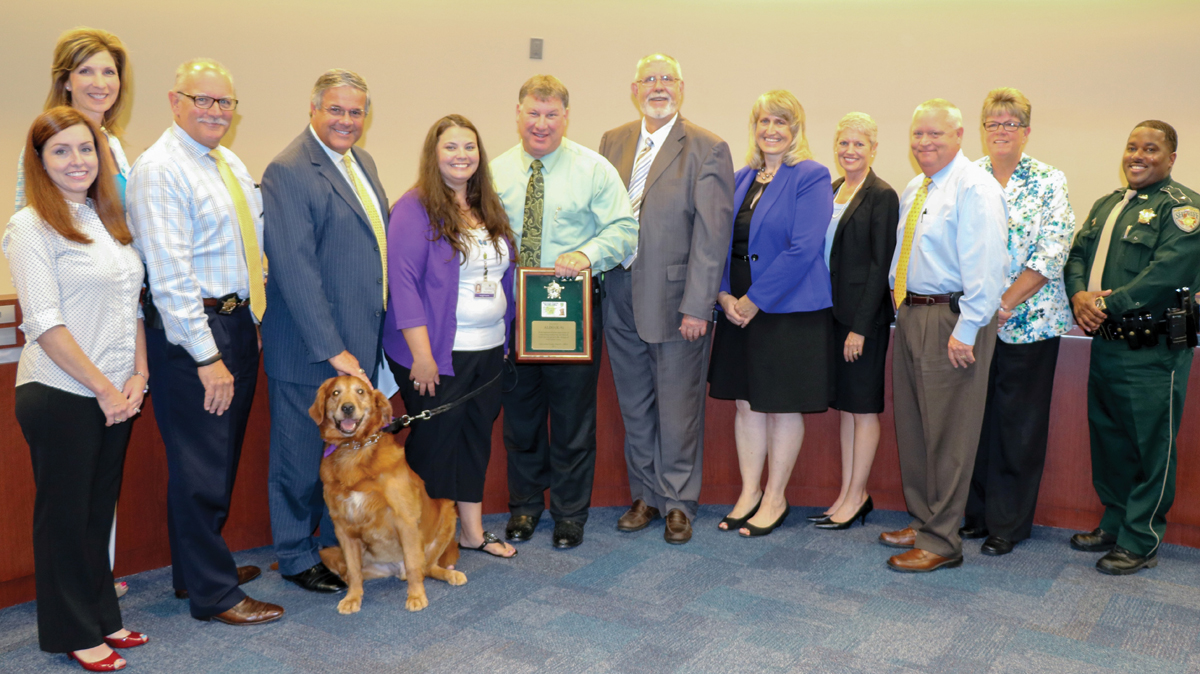 Sheriff Henry Trochesset, center, holds Aldo’s retirement plaque as he joins CCISD trustees and Superintendent Dr. Greg Smith for a picture of the transfer of the drug detection dog to a therapy dog working for the school district.

The good news just kept coming all evening as the Clear Creek ISD trustees held their July 27 meeting to discuss a host of issues.

In the space of about three hours, trustees: 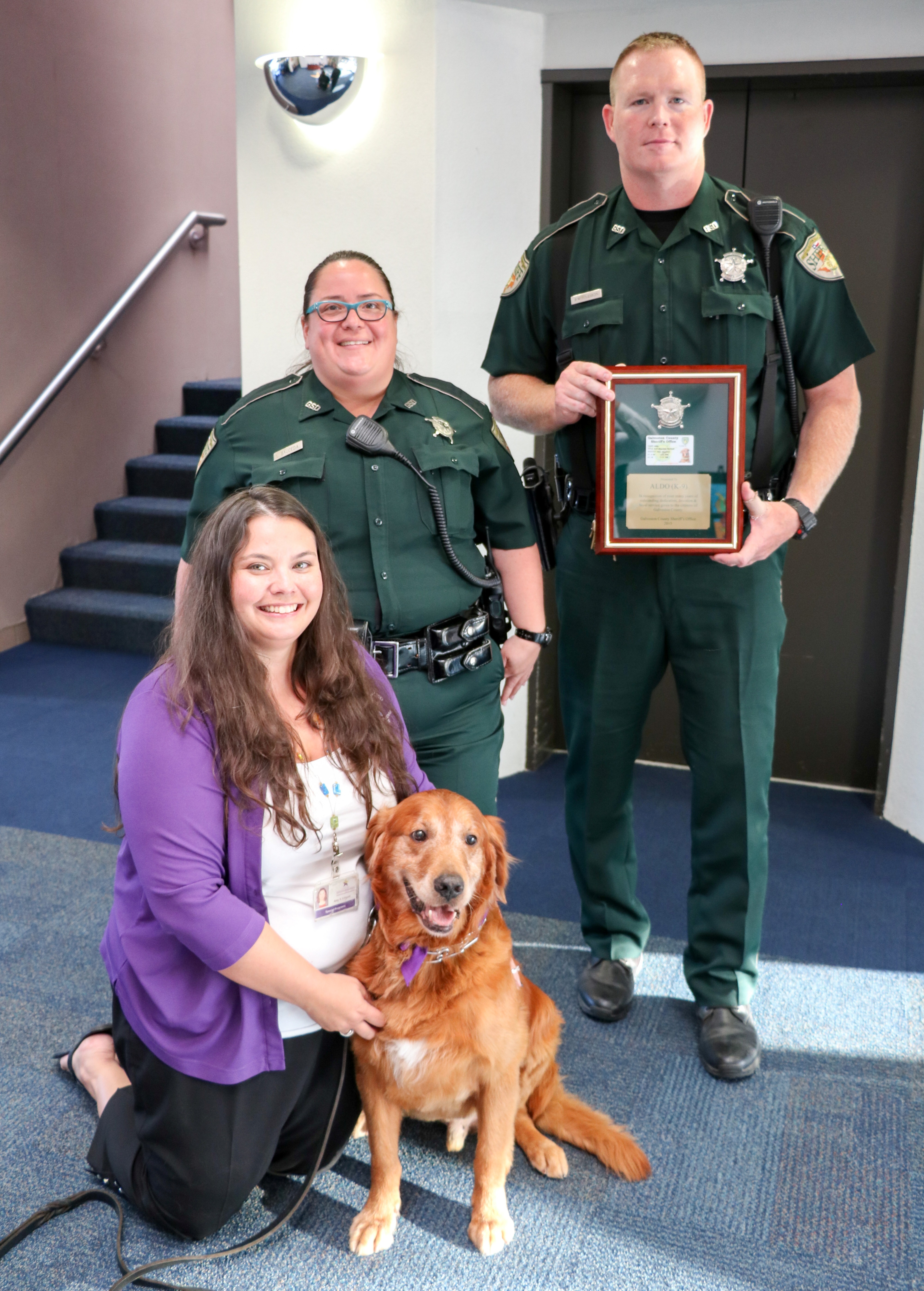 Aldo poses for photos with his new handler, Amy Kilgore, as two Galveston County deputies look on after being hired by the Clear Creek ISD at the July school board meeting. Photos by Eva DeCardenas.

TAX RATE THE SAME
While property values are rising, the upcoming CCISD tax rate could be a whole lot higher than it most likely will be, had it not been for two things.

First, the Texas Legislature passed a tax relief bill to increase the Homestead Exemption from $15,000 to $25,000. That will go before the voters for approval Nov. 3 and likely will pass.

Secondly, the $367 million in bonds for school improvements approved in the 2013 Bond Referendum have been handled in a careful manner leading to only a $0.04 percent rate increase versus the voter-approved $0.1125.

EXTRACURRICULAR FEES
When the Texas Legislature took an ax to school funding in 2011, cutting $17 million from CCISD, the district was forced to freeze salary increases and hiring, eliminate some staff positions and take a variety of measures to balance the budget reductions. Parents were even asked to pay fees for their children to participate in extracurricular activities. “The reason we did the fee was the Legislature,” Superintendent Greg Smith explained, adding, “Now we think it’s time to take this off the shoulders of parents.”

Trustee Charles Pond pointed out to the audience that “we’ve never denied a child the right to participate (if the parents couldn’t pay), we just made special arrangements.” He went on to express his appreciation that the fees, which brought in about $300,000 annually to CCISD, would be removed. “Generally fees are never removed,” he added.

SCHOOL LUNCHES
Fred Walker, CCISD director of child nutrition, told trustees that federal meal regulations had placed hardships on districts across the nation, leading to an increase in product cost and a decline in student participation. “As a result, we found we were not bringing in sufficient revenue from our full pay students to cover the cost of the program.”

He told how CCISD operated two school lunch programs last year – one a locally developed program for high school students with the elementary and intermediate schools under the National School Lunch Program. The local program was a success while the intermediate program saw a 15 per cent decline in participation that resulted in a $460,000 drop in revenue.

“We’re giving the kids the things they wanted,” he said, as he presented typical weekly menus to the school board. All free and reduced payment students will receive the same meals as every other student, he explained, pointing out that the price will be comparable with the high school plan.
“Child nutrition is very, very important,” Trustee Win Weber said.

PAY HIKES FOR ALL
Trustees also approved a $7.3 million compensation package that includes a 3 percent raise for the district’s 2,150 teachers with additional increases for those at the 5, 10, 15, 20, 25, 30 years experience level.  Also included is a 3 percent increase for all other employees, implementation of the second year of the Stipend Plan, plus adjustments to those on special plans.

Currently, CCISD’s starting teacher salary of $48,500 ranks 14th among Houston area districts but is only about $1,000 behind most districts. CCISD teacher experience goes to 52 years, but only 12 have more than 40 years.

Deputy Superintendent Paul McLarty told trustees that “several stipends in the academic, athletic and fine arts areas needed adjustments to bring them in line with our competitor districts.” The cost for the second year of the Stipend Plan will be $50,185, he said, adding that the plan’s entire cost over three years will be $197,450. “I think we’re in a good place on the budget,” he explained.

SMILES FOR ALL
Most enjoyable item on the agenda was the retirement of Aldo from the Galveston County Sheriff’s Department and his hiring by CCISD.

Sheriff Henry Trochesset and several of his deputies took part in the ceremony retiring Aldo as a drug detection dog and transferring him to the school district as a therapy dog serving with handler Amy Kilgore. The sheriff said Aldo had been “retired, retrained and reassigned. He loves his job and never complains.”