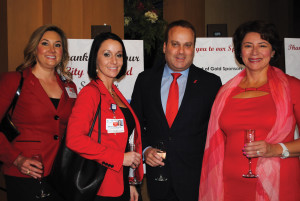 A SEA OF RED greeted any late arrivals at the American Heart Association’s 2015 Go Red for Women Luncheon at South Shore Harbour Resort as they looked over the crowd.

And, as AHA Communications Director Michelle Reed put it, “It was one for the books with a record-breaking $160,000 raised” by the 350 men and women who arrived clad in red. 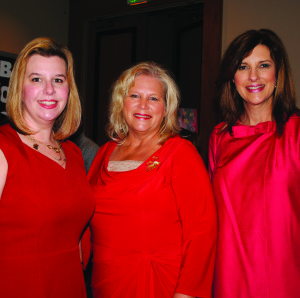 Highlights included a powerful story of learning how to have confidence by Michelle Aguilar, winner of The Biggest Loser; several inspiring stories told by heart attack victims; and the annual competition for the Heart Throb of the Year,
Five Bay Area men competed for the title of Heart Throb of the Year Award – Jason Mercer, Beau Harding, Dr. S. Benjamin Albright III, Dr. Monte Orahood and the winner, Dr. Alexander Sardina.

AS A THANK YOU for all Mayor Pro-tem David Braun did for his community before his death, the Nassau Bay City Council unanimously elected his wife, Angela, to fill his seat for the rest of his term at its March meeting.
Then, the council took a break from its deliberations to join Angela for a photo. 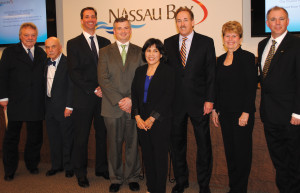 Angela Braun, center, has been appointed by the Nassau Bay City Council to fill the seat held by her late husband, Mayor Pro-tem David Braun, until the May election. Joining her for photos after the vote are, from left, City Attorney Dick Gregg Jr., and Councilors Bob Warters, Jonathan Amdur, Bruce Klug, Mayor Mark Denman, Sandra Mossman and John Mahon.

AUTHOR ANDY UPCHURCH presented an entertaining talk that had members of the Bay Oaks Women’s Association chuckling at their February luncheon.

After which President Sue Broughton and Vice Presidents Cambrey Rogers and Becky Hensley directed them to the registration desk. 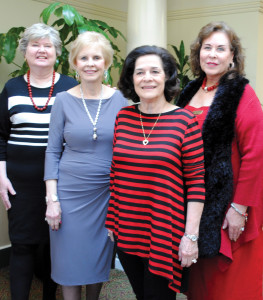 Others you might have spotted enjoying the French Almond Chicken Sautee were Sharon Dillard, who had Joy Muniz, Badiha Nassar and Barbara Groh as her guests; Janet Greenwood, Terri Steinkamp, Mary Colombo, Bobbie Moutz, Barbara Dickey, Sarah McClintock, Ann Stephenson, who had Dina Stephenson as her guest, Trisha Gunn, and Karen Reed.

OUR AREA’S Connie Windes Zieba served as chairman of the recent Houston Junior Forum’s annual fundraising luncheon, “Conversations from the Heart” at the Junior League of Houston. The luncheon featured Jim McIngvale, founder, owner, and operator of the Gallery Furniture retail chain, author, and philanthropist. The luncheon raised funds for the HJF College Scholarship Fund and HJF Community Grants Program.

Emcee for the event was Bill Stubbs, a leading interior designer and owner of William W. Stubbs and Associates Interior Design Firm. Marilyn and Bob McDowell were the guests of honor. The McDowells are longtime HJF and community supporters.

LOOKING for fun things to do this spring?

The La Porte Rotary Club plans to host its 7th annual Crawfish Boil on Saturday, April 11, from 11 a.m. to 3 p.m. in SeaBreeze Park at 1300 Bayshore Drive.

They invite everyone to come on over to La Porte and enjoy some crawfish.