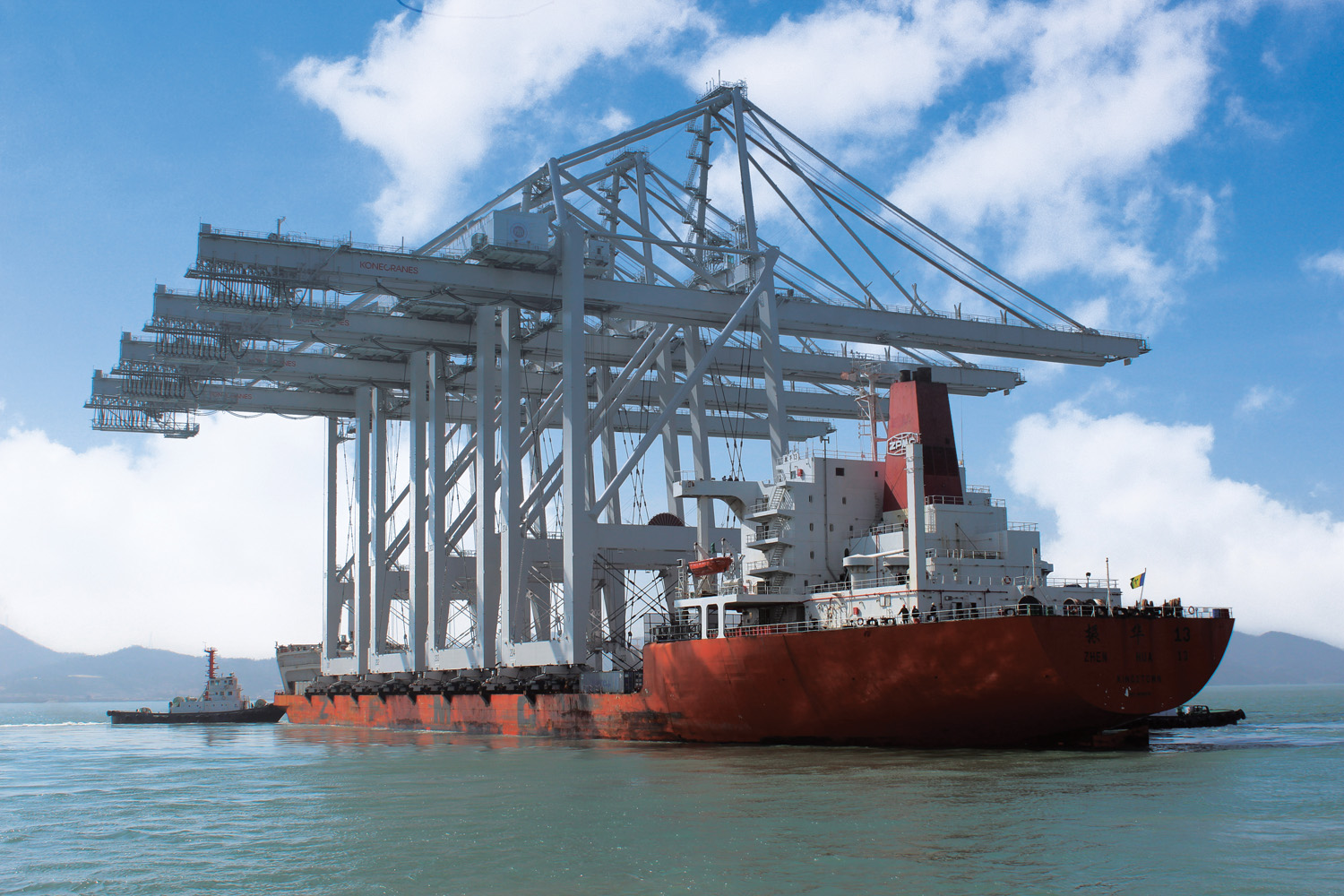 The new cranes for the Barbours Cut Terminal. Photo by POHA.

The two, 30-story tall Super Post-Panamax cranes, which arrived six month ago following a 73-day ocean voyage, rise majestically on the horizon like a pair of mammoth praying mantis at the Port of Houston Authority’s Barbours Cut container terminal.

Following a rigorous and methodical installation process, the two electric cranes—the largest of their type in North America—officially went into operation on November 5. Built by Konecranes in the tiny South Korean hamlet of Mokpo, the cranes are part of a $50 million contract approved by the Port Authority in 2013 and are part of a $700 million renovation of the Barbours Cut and Bayport container terminals.

“They have a much greater cargo handling capacity that is basically the same as the cranes now operating at the Bayport Terminal. They have a 65 long ton capacity and the ability to handle two, 20-foot containers at the same time. If a cargo hook is used, the capacity increases to 80 long tons. They can operate on a vessel that is 22 containers wide, while the old cranes can only operate on a vessel that is 13 containers wide,” said Paulo Soares, the Port of Houston Authority’s managing director of operations, who managed the crane project.

At 1,505 tons, the new cranes are more than twice as heavy as the cranes they are replacing (635 tons each), and at 289 feet tall and with a lift height of 204 feet, they are the largest cranes ever built by Konecranes. Soares said they will be able to lift and lower a loaded container in about twice the speed—approximately 295 feet per minute—as the current cranes. A total of four cranes have been purchased, with the other two scheduled to go into operation the first week of December.

“The cranes are part of a master plan redevelopment that will help move Barbours Cut Terminal’s capacity from 1.25 million TEUs (twenty-foot equivalent units) to 2.5 million TEUs,” Soares said.  “As we continue to grow our volumes, the cranes are an important piece to container movements through our port. The Port Authority and its stakeholders realize immediate benefits from the increased productivity levels the cranes provide. Greater productivity provides lower costs for all involved.”

The addition of the cranes, along with the recently completed dredging work that deepened Barbours Cut to 45 feet, are the key elements of the overarching project to ready the port to begin handling the larger vessels that will be able to pass through the Panama Canal once its massive renovation project is completed next year. The work is part of a five-year, $1 billion modernization plan that includes dredging and land-side infrastructure and wharf improvements.

The new cranes will enable Barbours Cut to handle ships with as many as 14,000 containers, an increase from the current limit of about 8,000 containers and Soares estimates they will increase productivity by about 15 percent over the older cranes. He says they will move about 38 containers per hour and that rate could possibly even exceed 50 per hour. As one of the world’s busiest ports, the Port of Houston consistently ranks among the leaders in containerized shipping and handles an average of 2,800 containers per day at Barbours Cut alone.

But just getting the two cranes to the U.S. and into operation represented an amazing feat of engineering, planning and execution. After construction was completed, the ocean journey began on February 23 from Mokpo, located on the southern tip of the Korean peninsula. Soares said they were transported fully erected by a Chinese company called ZPNC on a vessel called the Zhen Zhn Hua #13.

“The process of getting the cranes off the vessel and onto the dock took about 10 to 12 hours for each crane. The ship had to position itself alongside the dock so crews could cut off all of the extensive sea fasteners, bracings and lashings that were required to keep the cranes in place during the ocean voyage. With the fasteners removed, the ship then had to be aligned with a set of temporary rails on the dock, then hydraulic cylinders were used to push the cranes off the vessel and eventually onto the permanent rails on the dock,” Soares said.

Soares said only the most experienced crane operators—those with many years of experience on the docks—have been chosen to operate the new cranes.

Economic Impact Soars
Port of Houston Authority Chairman Janiece Longoria, speaking at the Greater Houston Partnership’s State of the Port event, said nearly 148,000 jobs have been generated by cargo and vessel activity at the port’s terminals since 2011.

Longoria also provided information on an impact study by Martin Associates that indicated public and private marine terminals at the port had a statewide economic impact of $265 billion in 2014, which represented 16 percent of Texas’ total gross domestic product. The study also shows that the port’s economic value to the state since 2011 increased by $82 billion, or 45 percent.

Longoria said the study showed that total jobs supported by the Port of Houston marine terminals is estimated at nearly 1.175 million across the state.

“The Port Authority is expecting to surpass two million TEUs this year for the first time in its history,” Guenther said.

Guenther said the container terminals continue to operate at record levels, with loaded container units growing by 14 percent over this time last year. He adds that as part of the commitment to provide cost and service advantages through increased efficiency, the Port Commission accepted the staff’s recommendation for tariff rates to remain the same in 2016 while vowing to maintain its dedication to funding infrastructure investments.