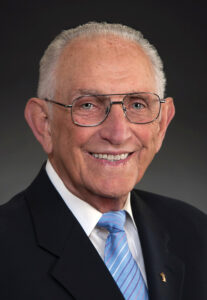 Gene Hollier, 85, a long-time Clear Lake resident and indefatigable community volunteer, passed away in June after a brief illness. That’s about the only passive thing that ever happened to Gene.

He was preceded in death by his parents Alfred Louis Hollier and Laurence dePerrodil Hollier; sisters Billie Guilbeau and Hazel Turnbull; brothers Ivan and Alfred Hollier.

Never one to sit still, Gene packed what seemed like three careers into his nearly 86 years. He was also an inveterate traveler, an amateur actor, an epicure, and a world-class raconteur.

After high school, the Port Arthur native studied math and engineering at Southwestern Louisiana Institute. Just two years in, though, the Korean War broke out and he enlisted in the Air Force where he would spend the next 20 years, after getting his wings as an F-100 pilot. But in 1961 his career as a pilot almost came to an end when his new Austin Healey was t-boned and totaled in England. Gene spent the next 15 months in a USAF hospital in Biloxi, Miss., where he had metal rods installed in his ankle and forearm, several vertabrae fused together, and a kneecap removed. For a while, it wasn’t clear if he would ever walk again, let alone fly an airplane.

He capped off his Air Force career with two tours of duty as the assistant air attache to Thailand. He spent a year in Washington, where he became fluent in both common and royal Thai, and learned to read and write the complex language also studying in the Foreign Service School and learning a smattering of spy craft.

His official duties included meetings with Vice President Spiro Agnew, Secretary of State Henry Kissinger, and a near miss with President Nixon. Gene liked to say that, on his secret trip to China, Nixon dined on a t-bone from the Hollier freezer. Gene’s tour as an attache culminated with the King of Thailand awarding him the Order of the White Elephant, a form of knighthood.

After the Air Force, Gene spent the next eight years operating a security company and did a little acting on the side, appearing in 17 episodes of the TV series “Magnum PI” and a variety of minor roles in movies.

He retired in 1996 when he and Emmeline fell in love and formed the dynamic duo that has been making Clear Lake a better place ever since.

Gene threw himself into volunteer work, particularly the Houston Livestock Show & Rodeo — joining the NASA Go Texan Committee, which provides scholarships to Bay Area graduating seniors. He originated and chaired the Trail Boss Program, which has raised the equivalent of $700,000 for the HLSR’s Scholarship Fund and also was active with the Rodeo’s Speakers Committee, serving as vice chairman and in 1999 was named Speaker of the Year. He also supported the construction of the Longhorn Project at the Johnson Space Center and served as liaison between the HLSR Board of Directors and JSC. In 2000, he was awarded the NASA Public Service Medal for his work assisting JSC’s involvement with the Rodeo. In 2003, Gene was elected to the HLSR Board of Directors, becoming a Lifetime Director in 2005. And in 2012, he was awarded the Silver Steer award for his 25 years of service to the NASA Go Texan committee.

But it wasn’t all about NASA and the Rodeo. In 2010, Gene was selected as one of the “10 Renaissance Men” in the Bay Area and awarded the Outstanding Friend of the Arts award by TAACCL. He was an honoree at the prestigious Men and Women of Heart gala, and named a Super Star by the Clear Creek Education Foundation.

He also served on the boards of the Clear Lake Education Foundation, the Longhorn Project, High School Aerospace Scholars, the San Luis Hotel Condominium Council, and the Lunar Rendezvous Festival. (He was King of this festival in 2018). He was a member of the Bay Oaks Country Club, First United Methodist Church of Pasadena, Space City Corvette Club, and the Clear Lake Chamber of Commerce. He actively volunteered for Communities in Schools and the American Heart Association.

Somehow, amid this whirlwind schedule of charity work and fundraising, Gene and Emmeline managed to find time to travel around the world, visiting places as far apart as Hawaii and Russia.

Services are pending due to the pandemic. In lieu of flowers, donations may be made to The Longhorn Project at NASA, 957 NASA Parkway, #129, Houston Texas 77058.