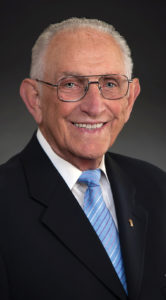 Gene Hollier has long been a knight, ever since the King of Thailand awarded him the Order of the White Elephant many years ago when he served as air attaché to the U.S. Embassy in Bangkok, Thailand.

Announcement of the high honor came at the Lunar Rendezvous Festival Kickoff Party, held in the University of Houston-Clear Lake Atrium II, before nearly 300 volunteers and members of the Royal Court and their families.

A native Texan, Gene was born in Port Arthur and attended Southwestern Louisiana Institute (now the University of Louisiana at Lafayette) pursuing a degree in engineering and math. But his college days were interrupted by the Korean War, and he left school to enter the U.S. Air Force.

During his 20-year military career, he served as an Air Force fighter pilot during both the Korean and Vietnam wars, flying over 175 combat missions. He was the rescue mission commander of continental Africa for an Apollo mission and even learned to speak Thai while serving in Bangkok.

FILM ACTOR
After his retirement, Gene lived in Hawaii for eight years, operating a residential security company and becoming a TV and movie actor. He appeared in 17 episodes of the TV series, “Magnum P.I.” and performed in several movies, stage shows and commercials, as well. He was relocated to Houston by his company in 1982, and moved to the Bay Area in 1983. He retired from business in 1996.

He presently sits on three boards of directors: the Longhorn Project at JSC, the Houston Rodeo and the San Luis Hotel Condominium Council and is a past board member of the Armand Bayou Nature Center and the Clear Creek ISD Education Foundation. He is a member of Bay Oaks Country Club, Lakeside Lutheran Church, and the Clear Lake Chamber of Commerce (volunteering at several of its annual events).

He has worked on Lunar Rendezvous events since 1985. There have been very few, if any, golf tournaments that he was not in charge of registration. Gene has volunteered on numerous committees over the past 30+ years, including serving as the Boat Parade announcer for several years.

Sponsoring two princesses and being a corporate sponsor are also part of his past contributions. For years, he has donated his rodeo package to the LR Fashion Show live auction and bids often on silent and live auctions at LR events.

SUPER STAR
In 2000 he was one of the honorees of the prestigious Men and Women of Heart Gala, selected for his many hours of volunteer time in support of the numerous charities. In December 2000, he was awarded the NASA Public Service Medal (the highest award given by NASA to non-employees of the space agency) for his work as liaison for JSC in its involvement with the Houston Livestock Show & Rodeo.

In 2010, he was selected as one of the “10 Renaissance Men” in the Bay Area. In 2011, he was awarded the Outstanding Friend of the Arts Award from The Arts Alliance Center at Clear Lake. In 2013, Gene was selected a Super Star at the Clear Creek Education Foundation Gala.

He joined the NASA Go Texan rodeo committee in 1986, and was selected as Outstanding Committeeman in 1994. In 1999 Gene originated and chaired a special program for the Go Texans called the Trail Boss Program. To date, this program has raised the equivalent of over $1 million in extra funds for the committee to place in the HLSR Scholarship Fund.

In 1996 Gene also earned admission to the Speakers Committee of the Rodeo. He became its vice chairman in 1999 and, in August of 1999, he was voted Speaker of the Year. In 2005 he was elected an HLSR Lifetime Director. In 2012, he was awarded the Silver Steer award for his 25 years of service to the NASA Go Texan committee.

Oh, yes, how to pronounce his name? O Lee A.