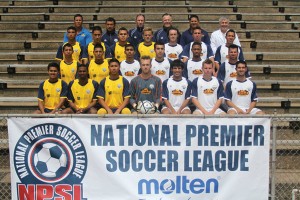 Champions League winners, Club de Futbol Monterrey Rayados are headed to Galveston for a challenge match with local professional soccer club, the Galveston Pirate Soccer Club, in what is sure to be the biggest sporting event ever to have landed on the island.

The Rayados only recently won the Champions League for the second consecutive year, making them the best soccer team in the whole of North and Central America and to be able to bring such an illustrious soccer side to the area is a major coup.

The CONCACAF title also allows them entry to play in the FIFA Club World Cup along with Champions of Europe, Asia, Australia and South America.

Pirate coach Brendan Keyes said “this is huge, perhaps the largest sporting event to have ever taken place in the Galveston area. We will be playing at Courville Stadium for this match as the capacity is 10,000 and the buzz around this game already tells us that tickets for the game will be like gold dust.”

“We have a large Mexican population in the area so it will interest a large demographic of soccer fans from across the region.”

“Typically, only the Houston Dynamo in the MLS would be able to attract a team of Monterrey’s quality but thanks to the growth of our club through the NPSL and our TV partner Azteca 51, we have been able to coax the Mexican giants to come to Galveston to participate in this challenge match.” continued the Irishman.

“This will be the Rayados reserve team we will be playing against, not the under 21s or academy side and we expect their squad to be littered with official first team squad players as they prepare for their new season. This match will be important to them as they try and get the players back to match fitness and preparedness for the 2013 Torneo Apertura.” 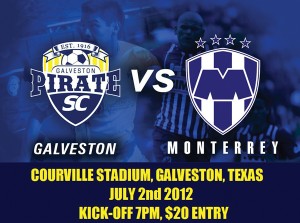 “We finish our NPSL season against Regals SCA on Saturday June 30th and this challenge match is scheduled for Monday July 2nd, so it’s going to be an exciting few days for all involved with the Pirate franchise.”

“Monterrey was very approachable with regards to this match, and agreed to the details without much discussion needed. They look like being very good opponents and their organizers have been gentlemen throughout the process.”

“We look forward to seeing the bleachers packed at Courville Stadium come July 2nd and hopefully with this stadium being smaller than the 38,000 Technologico Stadium they are used to, it will work in our favor and perhaps give us a level playing field with the Mexican giants.”

Ticket prices are set at $20 and available for sale online at Galvestonsocial.com or by contacting the club directly at 832-748-1001.