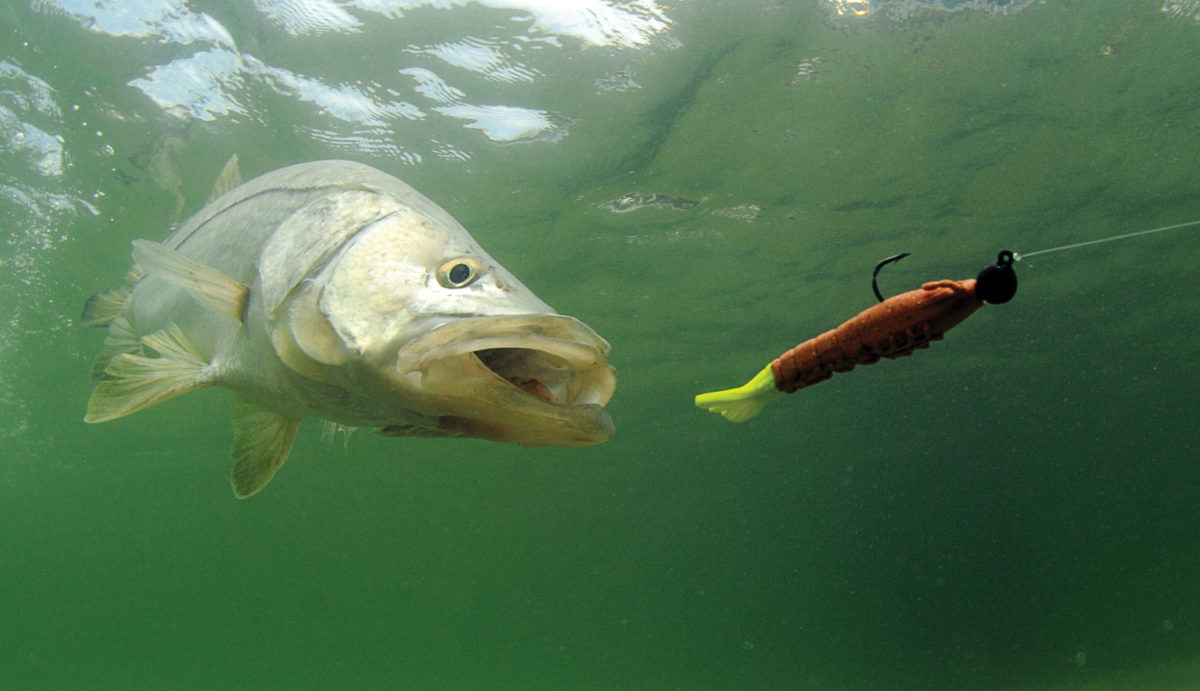 A snook was recently caught at the Galveston jetties

For years now almost everyone associated with the Galveston Bay Complex has had few good things to say about our fishing. There certainly was good reason to complain, as the quality of the water was driving finfish and crustaceans away.

Old timers, those who fished all around the complex during the 1940s and 50s, would tell of catches of fish that we just do not see today. Also, they would brag about the quantities of fish they would catch and give away, fish they would sell to seafood markets, or worse use for fertilizing their plants.

During that time it seemed that there was an endless bounty of seafood for the taking all over the area. Families would find good crabbing along the Houston Ship Channel as far upstream as the where the Battleship Texas is located. Nice catches of trout, croaker and other fish would come from the same area.

At some point during the 1960s it became apparent that something was happening to our stocks of crab and finfish in upper Galveston Bay and along the shores adjacent to the Houston Ship Channel.

This did not get any serious attention by our legislators until well into the 60s when quality analysis showed the water was polluted with contaminants from industries along the channel.

Further evaluations revealed that some of the rivers, bayous and creeks flowing into the bay system were bringing unacceptable amounts of contaminants in the forms of metals and sewage.

It did not take long for everyone to realize that famous phrase “Houston we have a problem.”

During that era my family and I fished out of Seabrook almost exclusively as the fishing was great and about half the distance to Galveston. Two of the more popular and productive spots out of Seabrook were Scotts Reef, an easy run from the bait camps along Toddville Road, and the spoil banks along the Houston Ship Channel which we referred to as the Bulkheads.

Kemah, across the channel was home to a party boat called the Texas Clipper and for $5.00 the boat would take anglers, or anyone just wanting an outing on the water out to the ship channel for a half-day of fishing. On weekends, the boat would make morning and afternoon trips and anglers always caught a variety of pan fish with an occasional speckled trout or red mixed in.

The fishing out of the Seabrook/Kemah area turned off toward the end of the 60s and by the early 1970s anglers were moving closer to Galveston to find fish. That is when I began fishing the jetties by boat.

At that time, more restrictions were being placed on dumping into Galveston Bay. As the environmental regulations were increasing, the Texas Parks and Wildlife Department began noticing a serious decline in our stocks of fish and began setting size and bag limits for certain species.

Additionally, efforts began to start educating fishermen that there was a finite supply of fish and that good stewardship of our resources was needed to aid the recovery and provide fish for future generations.

All of this has been a slow process; however, progress has been made.

Our fishing regulations go beyond just size and bag limits and are a major contributor to the return of healthy stocks of fish. The controls over dumping of wastes into the water have resulted in better quality of water in much of upper Galveston Bay.

Still, there are a number of areas, especially along the upper reaches of the Houston Ship Channel, that carry consumption advisories for both crabs and certain finfish. A list of those locations can be found on the Texas Parks and Wildlife website.

Now for the good news, which is that most of the fishing guides, including myself, are finding a wider variety of nice quality fish this year. A recent report of a snook being caught at the Galveston Jetties is a first in years. Red snapper, lane snapper, ling, mangrove snapper and king mackerel are catching the attention of anglers in lower Galveston Bay. The periodic rains this year have helped balance the salinity in the water and at this point the outlook is looking good.

We cannot let our guard down however and anglers need to increase their practice of conservation by employing catch and release of fish and retain only what they will eat for a meal or so. Also, continuous monitoring of our water quality is imperative.

All in all, our programs are working and the Galveston Bay Complex is experiencing a revival. That is good news for today’s anglers and for generations to come.