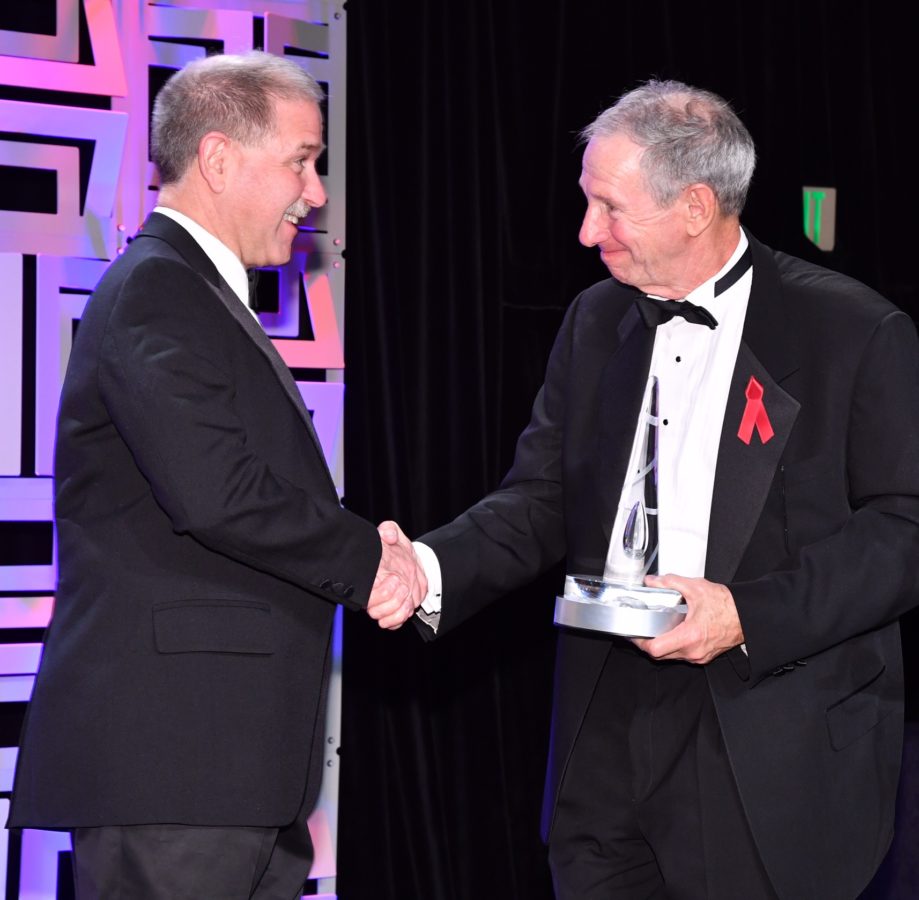 RNASA Foundation Chairman Rodolfo González opened the program by welcoming the guests to the April 28  gala at the Houston Hyatt Regency, saying that “RNASA’s mission is to encourage, recognize, honor and celebrate U.S. space achievements from across the entire country and across all sectors.”

The Clear Brook High School JROTC Color Guard presented the colors, followed by members of the High School for the Performing and Visual Arts Girl Chorus, who sang the National Anthem, and the Rev. Madella Williams, senior pastor of Taylor Lake Christian Church, gave the invocation.

The RNASA program kicked off with a year-in-review film by Space City Films. Miles O’Brien, former CNN correspondent and current science correspondent for PBSNewsHour served as the emcee. Miles said, “John is a national treasure, who helped make this country great, long before that was a campaign slogan, and we thank him for that, and I’m proud that I’ve got to know him along the way.”

In his acceptance remarks, Navias said, “Incredibly, my career has spanned the highest of human triumph, and the depths of human failure, the cheers and the tears of human endeavor. It is called the sublime symmetry of history. But whether triumph or tragedy, it all came down to communicating the news. Relaying the information to the media and to the public in very clear, unambiguous words.”

Astronaut Peggy Whitson, who spoke from onboard International Space Station, sent a congratulatory message to Grunsfeld, telling him “as an astrophysicist, an astronaut and a senior leader, you helped unlock the mysteries of space and champion the best that science and engineering, working together, can achieve.”

Dr. Michael Griffin, former NASA administrator and recipient of the 2009 National Space Trophy, presented the prestigious 2017 Rotary National Award for Space Achievement NST Award to Dr. John Grunsfeld. In his introductory comments, Griffin said “…if in John’s career he had done nothing but succored the Hubble Space Telescope in its many hours of need, he would still be worthy of tonight’s recognition, but he has done so much more. I think it is safe to say we would not have a future Mars program today without John’s efforts as head of the Science Mission Directorate.”

Accepting the National Space Trophy, Grunsfeld said, “I’m optimistic and excited about our future in space and on Earth. Thank you for your attention, thank you for awarding me the Rotary National Award for Space Achievement. I’m truly honored and humbled.”

TASC donated the portrait of Grunsfeld by Pat Rawlings, which was on display at the gala and used as the cover of the souvenir program. The portrait will become part of the National Space Trophy display at Space Center Houston for one year.

Visit http://www.rnasa.org/photos.html for images from the event. Individual photos of each nominee and winner are available upon request.

About RNASA: The Rotary National Award for Space Achievement (RNASA) Foundation was founded by the Space Center Rotary Club of Houston in 1985 to organize and coordinate an annual event to recognize outstanding achievements in space and create greater public awareness of the benefits of space exploration.

« Clear Lake Chatter: It was like a jungle at this Ball of the Wild
Ron Carter Hyundai announces their ‘Hug A Hyundai’ Marathon »
Bay Area Houston Magazine