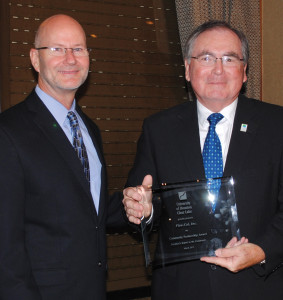 “Michael Squyres is a great example of an alumnus supporting UHCL,” said UHCL President William A. Staples. “He has always been committed to UHCL and this community.”

A privately owned gas and liquids measurement software development company whose products are driven by the needs of the hydrocarbon measurement industry, Flow-Cal has had a close relationship with UHCL since it was founded by Squyres in 1995. UHCL alumni comprise 38 percent of Flow-Cal’s workforce. In 2013, Flow-Cal further showed its commitment to UHCL by sponsoring a charter Interview Room in the university’s Office of Career Services. 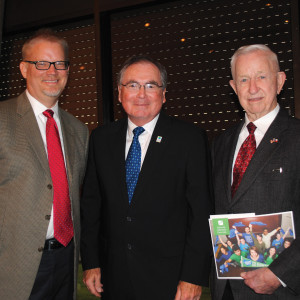 Staples explained that Flow-Cal has helped UHCL students in their career development. Representatives from the company have participated in job fairs, networking events, business etiquette dinners and mock interviews. They have financially supported FOCUS 2, an online career planning tool for students to select majors and career paths in UHCL’s Office of Career Services.

“At Flow-Cal, we feel very fortunate to have UHCL as a neighbor. Not only does our continued relationship with the school provide quality interns and quality staff, but it also helps us attract remote talent by offering convenient access to advanced degrees.”

Staples also updated those in attendance on key news and initiatives at UHCL, which has included the record-breaking fall enrollment of 8,665 students, the designation of the university as a Military Friendly School by Victory Media and the addition of the UHCL’s second doctoral degree – the Doctor of Education in Curriculum and Instruction with a STEM or science, technology, engineering and math focus. He reminded the group about the on-campus installation of a full-scale replica of the Liberty Bell, constructed by the White Chapel Bell Foundry in England, which cast the original Liberty Bell in 1752. 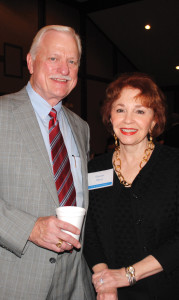 “While all of these accomplishments are very noteworthy, by far our biggest accomplishment in 2014 was the transition in 2014 from an upper-level to a four-year university,” said Staples. “Without a doubt, this is the second most significant development at UHCL in our history, the first being the opening of the university in 1974.

“What made many of our successes possible are the partnerships that UHCL has developed with corporations, community organizations, individuals, alumni, cities, foundations and our own employees to advance key initiatives at UHCL.