A Place in Time 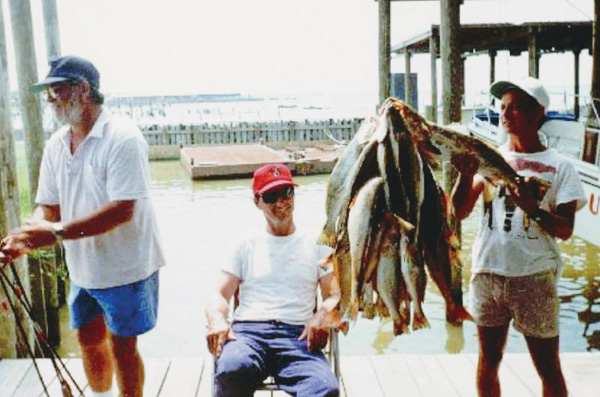 John, Louie and Ed with that big trout stringer from Bull Shoals back in the 90’s.

Memories light the corners of my mind.

How true is this, throughout one’s life. Travel experiences to places that have changed over the years and may not even exist anymore. Anglers have that one epic day that is forever burned in their memory. The place that it happened may have changed, but not the memory!

As the fireball, known as the sun arose from the East, we had high hopes for the day. We headed out of Eagle Point Fishing Camp to a place where I caught fish the previous day. This day, my friends were with me; Ed, Louie, and my mentor John. John had taken me under his wing when I started fishing out of Eagle Point in the late 1980’s. My thought on this day was: “we can catch quick limits and get back early for some much needed rest.” I caught them the day before, so this should be easy, but God and Mother Nature had a little change of plans!

The bow pointed 90 degrees East as I pushed the throttle forward. Seas were quartering us from the port side, I thought no way do we have a Northeast wind. Hannas Reef in East Galveston Bay was our destination. Hannas is one of the largest reef structures in all of Galveston and in the summer months very productive for speckled trout. Upon arrival we were greeted by Northeast winds 15+, turning the area rough and off colored. Three drifts with live shrimp under popping corks yielded nothing for our effort. Was it time to change locations?

John suggested we move towards the North shoreline to escape the wind and rough conditions. I wanted to make a easy day of this; did God have other plans? Just when we were about to move I glanced over to a little shell island about one mile from where we were, known as Bull Shoals. I told John, we can get on the protected side of the island, throw out the anchor and wait for this wind to lay. John, not real thrilled but agreed. We idled in towards Bull Shoal and dropped the anchor.

Louie and Ed decided to eat their lunch early. I thought why not and grabbed a sandwich. John was having none of it; he came to fish. He baited his hook and cast out his popping cork, named infamous orange, into the water. Just as soon as the cork hit the water he had a fish. Trout no less, so I preceded to net his fish. My thought was blind luck. John is just that way when it comes to fishing, he can catch them in a mud puddle! He baits up again and a couple minutes later has another trout. Has God landed us on a school of fish?

Lunches were packed away quickly. By divine intervention we had landed on a school of fish, all caught on live shrimp and infamous orange popping cork, made by our late friend Gary. Along with speckled trout we also boxed some Redfish. Before it was all over boats had gathered around us, one even bumping into our boat trying to get in on the action! God had other plans and for some reason those fish on this day were ours! Before long, within four hours, we were headed back to Eagle Point, out of bait and enjoying slick water. The wind finally laid down.

As we pulled into the slip at Eagle Point, the docks were empty of fisherman due to the wind that morning. One person was there, Gene, who kept his boat in a slip. He chuckled and asked if we had any luck, not expecting anything. We all answered yes and preceded to string the fish up for a picture. He walked off in disbelief, calling Gary, telling him of the catch. John of course called Gary on his way home, and all Gary said was, Gene told me, believe whatever they tell you!

To this day this was the largest stringer of fish I have been a part of or seen at Eagle Point. This took place in the early 90’s on Bull Shoals, that has since been submerged due to subsidence. We all have not fished together in many years, but this day still lights my memory in the corners of my mind!

At this writing John’s wife is fighting her toughest battle of her life. Please keep her in your prayers.