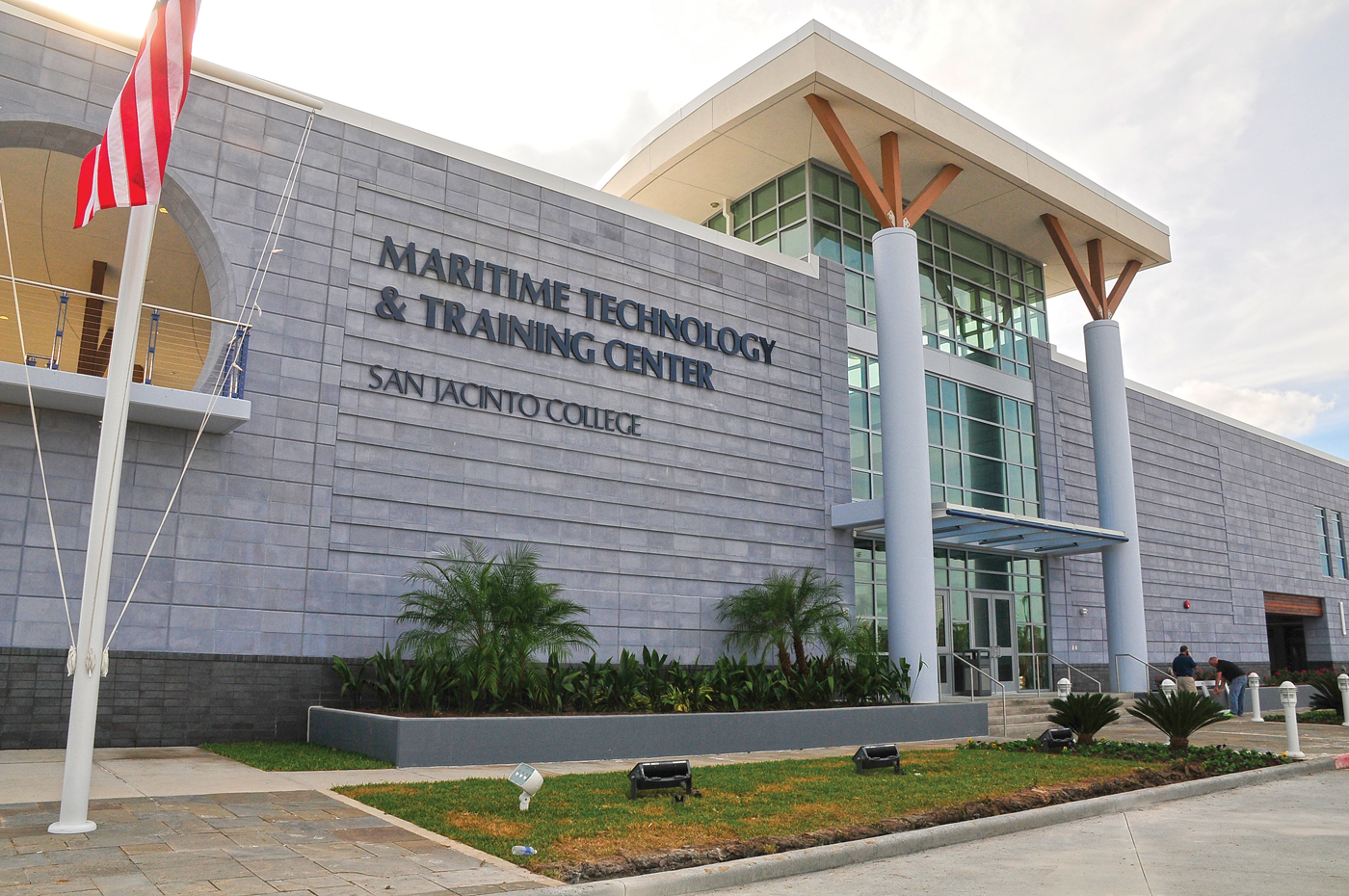 Teaching someone how to moor a tanker or guide a tug boat through a narrow space between two hulking barges is considerably more difficult when the instruction is being done on dry land and the closest body of water is the hotel swimming pool across the street.

But for students enrolled in San Jacinto College’s Maritime Education program, the heavily traveled waters of the Houston Ship Channel serve as both laboratory and classroom after the opening of the new Maritime Technology and Training Center in La Porte. The $18 million, 45,000-square-foot facility, which officially opened on Jan. 4 of this year, is located practically on the docks and represents a remarkable upgrade over the previous building, which was basically a converted warehouse.

“There is lots of excitement because the building is brand new and because of its location,” said Amy Arrowood, a maritime instructor at San Jacinto College. “It’s right on the turning basin, so we can be talking about a specific topic and it could be happening right outside our windows.”

The building houses three ship simulators, an engineering room, a swimming pool and nearly triple the classroom space as the old building. Arrowood said the college was limited in both the number of classes it could offer and the number of students in each class due to the cramped quarters of the previous facility, which had a total of five classrooms. With 17 classrooms now, officials hope to increase class offerings, which could result in a spike in enrollment.

“We wanted to hold additional classes and the industry needed additional classes, but we couldn’t hold them from a logistical standpoint because we just didn’t have the classroom space. Now we’ve got more classrooms and a variety of those rooms, too. For example, before we had five radar simulators and could teach up to 10 people in the room. Now, we have two (radar) rooms of 24 (students) each,” Arrowood said.

Tellepsen Builders served as the general contractor on the project, while Texas IBI Group was the architect. Brooks & Sparks was the civil engineer and Rizzo & Associates filled the program manager role.

According to Port of Houston Authority figures, the 25-mile Port of Houston generates $178.5 billion in statewide economic impact and another $4.5 billion in state and local tax revenues each year. The complex also creates over one million ship channel related jobs statewide, and the demand for skilled and educated workers shows no signs of abating. San Jacinto College, through its maritime program, is helping industries doing business along the ship channel find the qualified employees they need to meet the demands of the 21st century. Launched in the fall semester of 2012, the program offers continuing education courses and an associate degree in maritime transportation that combines United States Coast Guard and Standards for Training, Certification and Watchkeeping (STCW)-approved training with the college level academics required of an associate degree.

“All of our classes on the continuing education side are Coast Guard-approved classes that exist because they are required by the Coast Guard for mariners in order to maintain or upgrade their licenses and certification,” Arrowood said. “Right now, we don’t offer every Coast Guard approved course, but our goal is to increase from 35 (courses) to closer to 90 to 100.”

“We can now hold classes more frequently. A lot of mariners work four weeks on, four weeks off, so if we’re running a class every four weeks, some mariners could never catch certain classes. The new building allows us to increase the availability of classes, so we should see our enrollment numbers increase,” Arrowood said.

Arrowood said the continuing education program has issued over 3,500 certifications since its inception and there are currently 42 students enrolled in the associates degree program and officials are hoping to see huge gains in both numbers as early as this fall thanks to the increased classroom capacity offered by the new facility. The program’s staff is comprised of Coast Guard-approved ship masters, chief engineers, former U.S. Navy and Merchant Marine officers, as well as skilled technicians, who will be able to impart their wisdom in a center that has no equal in the region.

“The gulf coast was missing a one-stop shop for all maritime training. You could get radar training at a certain place or a different class here or there, but there wasn’t one place you could go for all of your maritime training,” Arrowood said. “We will offer that eventually once we get all of the Coast Guard courses here. We will be that one-stop shop, whether it’s for a tow boat captain, tankerman or cruise ship captain; we will be offering classes for the inland industry, the near coastal industry and the large, blue water industry.”

Arrowood said local industry leaders have been demanding more skilled maritime workers for years now, and the new facility should help position San Jac to help meet the demand that’s been fueled by increases in imports and exports and the rapid growth in the production of plastics by manufacturers along the ship channel.

“We work closely with our advisory committee on what we can do in our program and classes in order to turn out the best mariners. We couldn’t do what we do without them,” Arrowood said.

She says in addition to providing a launching point for young students hoping to land entry level positions in the maritime industry, administrators are hopeful the expanded facility will be a boon to workers looking to enhance their ability to move up to higher paying, more rewarding positions through the continuing education program. By offering open enrollment, workers eyeing a change in their career path will be afforded fast-track curriculum options, while contract training programs are also offered that are designed in partnership with companies to address specific needs to keep workers competitive in their respective field. For more information on the maritime program at San Jacinto College, visit Sanjac.edu.