THE BEAUTIFUL West Mansion on NASA Parkway is alive and well and ready to dance again. Owner Hakeem Olajuwon has simply outdone himself and spent a small fortune turning the mansion back into the “Grande Old Lady of the Lake.”

And, besides looking snazzy on the outside, she’s just plain gorgeous inside – like a majestic palace.

Men Go Red for Women is a dynamic and committed group of men rallying their resources to fight heart disease, the No. 1 killer of both women and men. “We’re standing behind the women we care about – wives, mothers, daughters, sisters and friends – by inspiring communities to provide funds for research and lifesaving programs,” Santiago said.

Before long, the basketball Hall of Famer invited all back to the East Wing for a short program by Santiago on joining the Circle of Red, with CCISD Superintendent Dr. Greg Smith, Clear Lake Chamber Past Presidents Jim Sweeney and Michael Divine, Bay Area Regional Medical Center CEO Dr. Michael Lyons and his wife, First Financial Benefits President Rick Gornto in the crowd.

WHEN YOUNG Claude Harmon III was sitting in his classes at Clear Creek High School, dreaming of getting out on the nearby golf course, little did he know that some day he would be giving golf lessons to the president of the United States.

But there was Claude, along with his dad, world renowned golf instructor Butch Harmon, offering pointers to President Obama on how to improve his game. Both Harmons are golf coaches – assisting some of the world’s top golfers.

The president  was the guest of Astros owner Jim Crane at Crane’s exclusive Floridian Yacht and Golf Club in Palm City, Fla., and played in a foursome with Butch Harmon’s former student, Tiger Woods, U.S. Trade Representative and former Dallas Mayor Ron Kirk and their host.

Beforehand, the president got pointers from the Harmons, who formerly lived in Nassau Bay.

Only recently, Claude was receiving congratulations on his first major victory as an instructor when Ernie Els won the British Open. In fact, Claude has quite the golfing pedigree.

His dad has coached Phil Mickelson, Tiger Woods and Greg Norman, to name a few.  His grandfather, Claude Sr., won the 1948 Masters and his uncles, Craig Wood Harmon and Bill Harmon are successful and well recognized golf instructors, as was his late uncle, Dick Harmon.

Tiger said later the match play was “a lot of fun for us,” adding that he thought it was “pretty cool” to be playing with the president.

Claude thought it was “an amazing experience,” especially getting to tutor the president, he told his mom, Lillie Harmon of Clear Lake, who is community affairs director of Bay Area Houston Magazine. 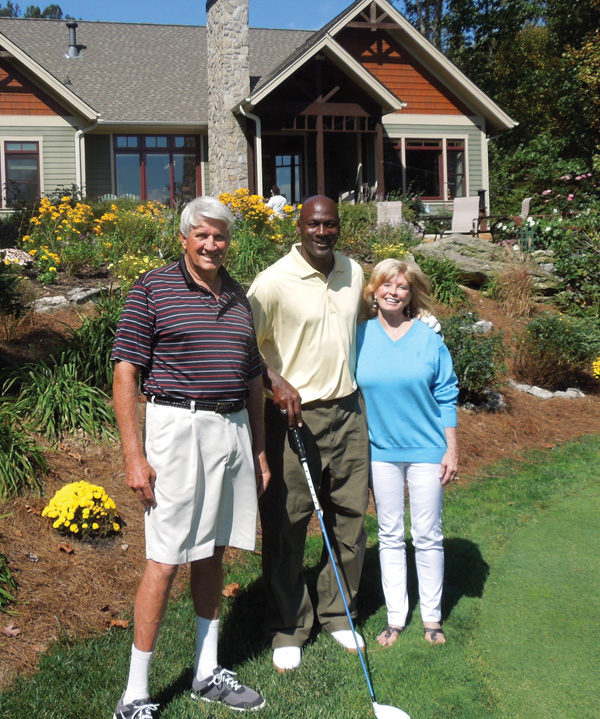 Basketball legend Michael Jordan stops for a photo-op with Herb and Charlene Miller of Taylor Lake Village in the North Carolina mountains.

TAYLOR LAKE VILLAGE residents Herb and Charlene Miller had quite a surprise while at their vacation home which overlooks the Champions Hills Country Club Golf Course in Hendersonville, N.C.

A friend called to tell them to hurry down to the tee right below their dining room window and they just might run into none other than basketball Hall of Famer Michael Jordan. They did, Charlene with camera in hand, and got their photo made with North Carolina’s most famous citizen as she joked about “always taking my camera with me when I work in my flower garden.”

Michael seemed to enjoy the joke and took time to poise for a photo with the Millers, which they willingly shared with the world.

Carol Wicklander, Pat Biddle and Nina McGlashan, from left, catch up on each other’s news as they await the start of the Bay Area Museum Guild meeting.

BAY AREA MUSEUM GUILD learned about “Trends in Fashion Jewelry” when Gail Ashby presented the program, after which Cindy Kuenneke of the Guild’s hospitality team invited all over to sample the desserts everyone had brought. Next on the Guild calendar is a trip to the Lone Star Flight Museum in Galveston Tuesday, April 23 . . . . Meanwhile, Recherche members were spotted lunching at Cullen’s while Bay Oaks Women’s Association members had a Mardi Gras theme for their monthly luncheon . . . . The Arts Alliance Center at Clear Lake plans to offer young artists some fun-filled opportunities to enhance their creativity this summer in the form of art camps in June and July. Call Cindy Fischer, 281-335-7777 for dates, hours and costs . . . .