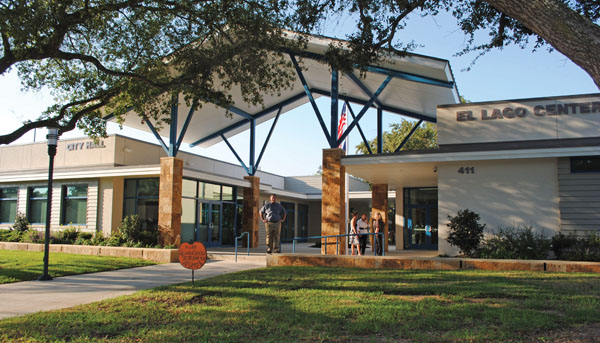 Have you seen El Lago’s handsome new city hall and community center? If not, drive down Lakeshore Drive next time you’re in the neighborhood and take a peek at the new 5,000-square-foot complex.

The $1.8 facility at 411 Tallowood Drive — next to the city swimming pool and adjacent to Ron McNair Park, the pavilion and the El Lago Racquet Club — is part of a city revitalization that earlier included remodeling the giant pool. The city showed off the new facility to Bay Area residents, serving up tours of the complex and an array of appetizers and desserts to residents and guests.

The other part is an 1,800-square-foot events room that can be rented for community gatherings.

In between City Hall and the events room is a large kitchen, where food can be prepared for special events; a large fitness center with all the latest equipment; and a locker room.

“City Council will meet in the events room,” the mayor said, explaining how officials would set up the lectern and seats for the twice-a-month meetings on the first and third Wednesdays at 7 p.m.

The move will give the Lakeview Police Department, which serves both El Lago and Taylor Lake Village, more office space. The municipal court and the court clerk’s office will remain at the old building.

The Astronaut Wall of Fame is still at the old building as no decision has yet been made to move it or not, Emel said.