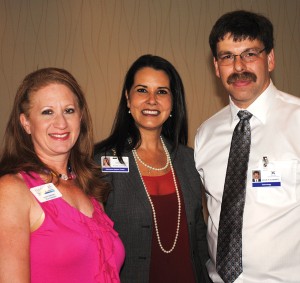 “Our kids’ tomorrow begins today,” Clear Creek ISD Superintendent Dr. Greg Smith reminded the Sept. 19 Clear Lake Area Chamber luncheon crowd, noting that “student success doesn’t happen by chance. It takes all of us working together to prepare our children to lead in the 21st century.”

To which¸ UH–Clear Lake President Dr. Bill Staples added,  The challenge is that we must reinvest in education at all levels due to the major budget cuts in the last (legislative ) session. Most communities would kill for what we have – great schools and a great university.”

Both educators sharing the luncheon podium were hard hit by the severe budget cuts and have been struggling ever since to provide their students with the education they deserve with less and less funds.

“We need our children to be innovators, problem solvers and self-directed learners,” Smith said, (yet) “at the state level, our legislators and the leader of the state chamber organization think we need less of that and more standardized tests. Guess what, they are getting their way unless we do something.” 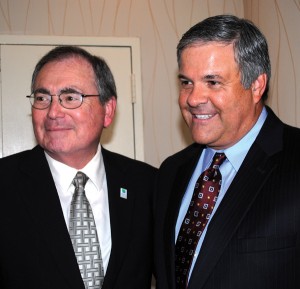 CCISD, he said, has been selected as one of the 20 high performing school consortium districts in a pilot to design an alternative assessment system which creates a more balanced system that “puts the love of learning and teaching back into public education.

“More than 20 percent of the academic calendar is spent on state required testing. This doesn’t take into account SAT, ACT or AP testing, the true measures of college potential. If you want a generation of great multiple choice takers, then stay idle.

“If you want a highly motivated, creative and collaborative workforce, I urge this chamber to join other chambers in passing a resolution against this movement of high stakes testing and advocate for meaningful student assessment.”

Staples said that for the university, “the 2011 Texas legislative session was both bad news and good news. The bad news, which affected all of us, was major budget reductions for all levels of education with UHCL receiving a 20 percent reduction in state appropriations.

“Simply put, like CCISD, we are serving more students with significantly less funding,” adding that “due to the hard work of many people at UHCL, we did not lay off a single person, although we did leave a number of positions vacant.

The addition of freshmen and sophomores in 2014 “would not have happened without the support of our business, education and government partners. They all expressed support. I especially want to. . .thank the Clear Lake Area Chamber and CCISD for their support. They told our legislators this was a good idea. It needed to be done.”

But, the UHCL president warned, “the reduction of the last session cannot become the new normal. We must reinvest in education at all levels due to major budget cuts in the last session…For our community, it is critical that we not only maintain, but enhance our educational infrastructure. Your support, as leaders of the business community, will be critical to our success, and your voices in support of education with our legislators must be heard.”

Smith also expressed concern about legislative budget cuts, noting that about one-fifth of the schools are 40 years or older and in need of critical repairs or a complete rebuild. “While we successfully balanced the budget this year despite another $5 million less from the state, we simply do not have the available funds to accommodate the facility and growth needs of the district.

A citizens committee has been established by the school board to prioritize our needs, he explained, “and, if necessary, we will come to voters to ask for your support for a bond in May. I also know there is a movement to get our students a second stadium, as well. With five high schools now. . .we simply can’t do five varsity games in one stadium. None the less, that will be for the community to consider.”