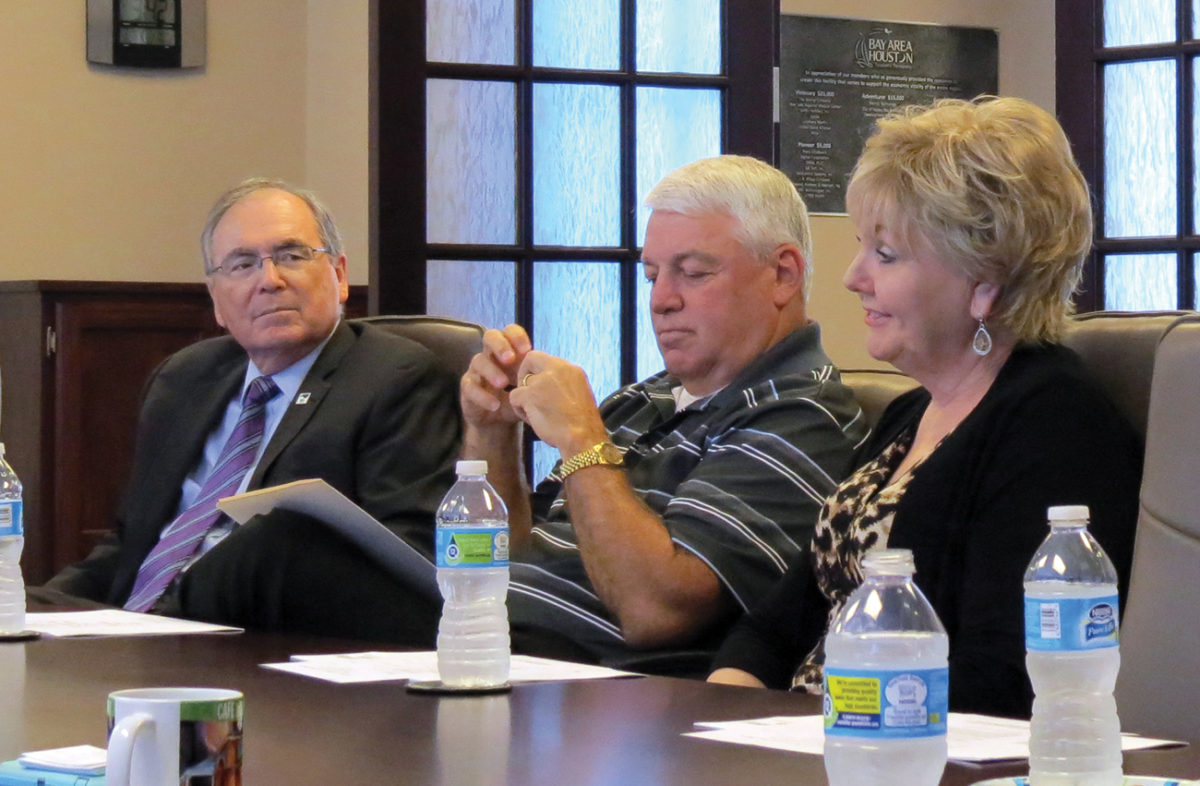 Three who made a difference. Trish Hanks, immediate past superintendent of the Friendswood Independent School District, shares her thoughts on life lessons as Dr. William A. (Bill) Staples, president, University of Houston-Clear Lake, left, and Dr. Kirk Lewis, immediate past superintendent of the Pasadena Independent School District, listen attentively.

A few of the region’s educational institutions have seen or are about to experience a change in leadership. This “changing of the guard” offers a unique opportunity to gain insight into the skills that made these leaders so successful.

Members of the Education and Workforce Development Committee of the Bay Area Houston Economic Partnership recently sat down with Trish Hanks, newly-retired superintendent of Friendswood Independent School District, Kirk Lewis, Ph.D., who retired as superintendent of Pasadena Independent School District in January 2016, and William A. (Bill) Staples, Ph.D., who will retire as president of the University of Houston-Clear Lake at the end of the summer. They offered a few invaluable life lessons that they garnered over of decades of service.

Kirk Lewis
Dr. Kirk Lewis spent 30 years in the Pasadena Independent School District, the last 10 as superintendent. He offered, “It didn’t take me long to learn that every action that I took or didn’t take impacted lives, either the lives of the kids that we were responsible for or our staff in some way. I couldn’t make a flippant or a snap decision. Sometimes you have to, and you do your best under those circumstances.

“With any major decision, you better think it through, because it’s going to impact somebody in an adverse way from their standpoint. You want to make sure that you’re impacting the greater life of the kids that you’re responsible to serve.

“Also I learned pretty quickly to check your ego at the door. You have to listen to others, take their input, and use it to make an idea better. Don’t surround yourself with YES people who are just going to agree with everything you say. It’s infuriating sometimes, but if you have that different input, you’re going to make better decisions.

“Finally, always have the big picture in mind where you’re heading down the road. That’s hard for a lot of people, particularly when they like to stay in a comfort zone. It’s hard for them to see a bigger picture as to why a change needs to be made.”

William A. (Bill) Staples
Dr. Bill Staples joined UHCL in 1979 and became the fourth president of the university in 1995. He emphasized the value of teamwork stating, “I always say to our internal leadership group in our leadership training program, ‘If you get the right people with you, you can do a lot of things.’

“One of the great quotes I like is by Jim Collins, who wrote many years ago in From Good to Great that everything else changes. Markets change. Products change. Technology changes. The constant is your ability to attract and retain enough of the right people. If you can build that team and keep it together, it just makes a huge difference.

“Also, I had to make a really tough decision about 14-15 years ago. I was at home on a Saturday morning, drinking coffee, sitting on the sofa trying to make a decision. I didn’t know what I was going to do.

“The moment that thunderbolt hit me, the decision fell out in two seconds. That is something I’ve gone back to time and time again. That’s the question as CEO of the university that I have to answer.

“You have to have enough of a good team that you can manage the day-to-day operations really well or as well as can be expected. Then you have to have some time to think about how to change the organization to be better than it is right now.”

Experience as teacher
Experience is a great teacher but often a hard task master. Sometimes fortune smiles on us, and we are given the gift of learning life lessons the easy way. BAHEP expresses its sincere gratitude to Trish Hanks, Kirk Lewis and Bill Staples for sharing their life lessons, some of which were undoubtedly learned the hard way.