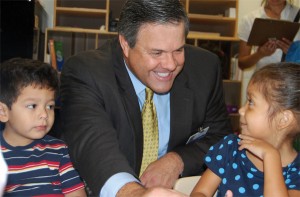 While the massive state legislative budget cuts have inflicted a huge strain on the Clear Creek School District, it has not deterred Superintendent Greg Smith from his mission.

He is so driven, in fact, to see that his students get a first-class education, he has been named Regional Superintendent of the Year.

“In CCISD, we are committed to helping students not only achieve academically but also become positive contributors to the school community,” Dr. Smith says, proudly pointing out that of CCISD’s 2,770 June graduates, “97 percent of them are off to college, the workforce or the military.

“I am truly humbled by this honor because this award recognizes the outstanding work done by Clear Creek ISD staff each day. Our school district is not just a great place to learn but also a great place to raise a family.”

Meanwhile, he continues to stay busy looking for ways to cut the district budget, while also offering a “world-class education.”

He was nominated by the CCISD Board of Trustees for his student-centered leadership. Region 4 represents 53 school districts, seven counties and more than one million students.

Board President Ken Baliker said Smith is deserving of the honor because of his ability to lead the district during difficult financial times, while simultaneously improving student performance.

“Dr. Smith has deftly managed a $17 million reduction in state funding to CCISD through thoughtful adjustments to programs, services and staffing, and our students continue to thrive. The board looks to Dr. Smith to lead this productive model for public education in our community.”

As the regional winner, he will be the Region 4 nominee for the 2012 Texas Superintendent of the Year award, presented by the Texas Association of School Boards and announced Sept. 28 during the TASB annual convention in Austin. 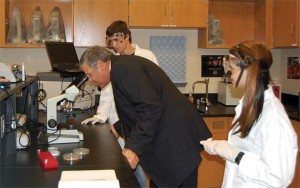 Smith was presented with proclamations from the City of Nassau Bay and the City of League City in honor of the achievement. Both League City Mayor Tim Paulissen and Nassau Bay Mayor Mark Denman proclaimed the day as “Dr. Greg Smith Day” at their meetings, which were attended by CCISD school board members, who wanted to share in the celebration.

Under his leadership, both Alvin ISD and Clear Creek ISD achieved Exemplary ratings from the Texas Education Agency — the highest academic rating issued to a Texas school.

He began his education career in 1981 as an elementary/middle school teacher in Houston ISD, moving to Galveston ISD as assistant principal at Austin Intermediate and then principal at Ball High; and later Pearland High.  In 1996 Dr. Smith joined CCISD central administration as a cluster director, and in 1998, he was named deputy superintendent of Pearland ISD.

He and his wife, Kathy, are the parents of two daughters.