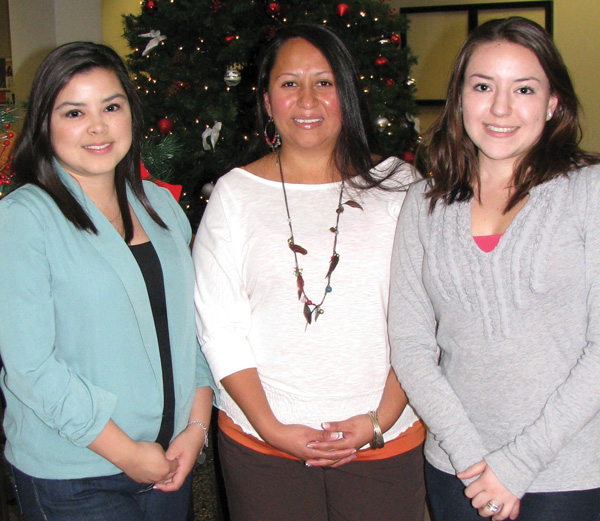 University of Houston-Clear Lake School of Education graduates Jehovanissi “Jo” Solis and Martha Pacheco, and student intern Evelyn Aaron, from left, have been named Exceptional Teacher Candidates by the Texas Quest for Quality project. Quest for Quality is the first phase of a three-part program that partners with Texas universities to identify and highlight exceptional students and faculty, exemplary instructional and programmatic practices, and applicable research. Solis is a third-grade bilingual teacher at Greta Oppe Elementary in the Galveston School District. Pacheco graduated mid-December 2012 after completing an internship in the Goose Creek School District and Aaron, a student intern in the Galena Park School District, will graduate in May 2013.

The University of Houston-Clear Lake continues building on success as it welcomes the new year.

In spring 2012, UH-Clear Lake introduced its new creative marketing campaign, “The Choice is Clear,” featuring slogans such as “What do you call a UHCL grad? Boss” and “Created for NASA in 1974. Still Launching Careers.”

In anticipation of its first freshman class in fall 2014, UH-Clear Lake also added slogans such as “Be First. Accepting Freshmen Fall 2014.”

UH-Clear Lake wrapped up a five-phase mascot search process by selecting a hawk as its new mascot in fall 2012. The search process, which began in fall 2010, included input from students, alumni, faculty, staff and the community.

“Our Hawk mascot logo reflects attributes such as courage, spirit and adventure, as well as the natural beauty of our campus and the historical relationship to the alumni association’s hawk logo from the 1980s,” said UH-Clear Lake President William A. Staples in the fall announcement introducing the final mascot artwork.

For a third time, the university was named to the 2012 President’s Higher Education Community Service Honor Roll by the Corporation for National and Community Service. The honor recognizes higher education institutions that reflect the values of exemplary community service and achieve meaningful outcomes in their communities. Examples of such service include the university-wide Day of Service, which gives faculty, staff, students, alumni and community friends an opportunity to give back to the community. More than 185 volunteers participated in 2012 at one of three off-campus service projects including the Baytown Habitat for Humanity, Houston Food Bank and Armand Bayou Nature Center.

New degree programs added in late 2011 and made available in 2012 included the Master of Arts in Industrial/Organizational Psychology. Other degree opportunities included the addition of the university’s Doctor of Education in Educational Leadership to the University of Houston System at Cinco Ranch offerings.

UH-Clear Lake Pearland Campus continues to grow with a record 732 students in fall 2012 pursuing their educational goals at the campus that opened in 2010.

The Commission on Accreditation for Law Enforcement granted accreditation to the university’s Police Department.

UH-Clear Lake’s Center for Autism and Developmental Disabilities, along with The University of Texas Health Sciences Center, University of Houston and Texas Women’s University, was awarded a shared five-year federal grant.

Associate Professor of Biology and Biotechnology and Program Chair Larry Rohde received a $146,717 grant from NASA.