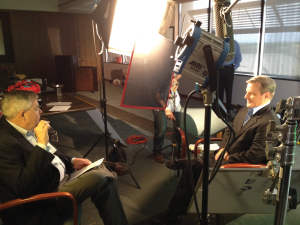 Producer Jim Bailey on set interviewing author and historian David Falloure at the Port of Houston.

New documentary tells the amazing story of the channel’s creation

The story of the creation of the Houston Ship Channel reads like something out of the fertile mind of a Hollywood screenwriter. A murky, unruly bayou is transformed into a 52-mile commercial channel and serves as the launching point of what would become one of the world’s largest cities and a hub of international commerce.

But the real story behind the development of the channel is no piece of fiction; it is a living testament to engineering ingenuity, political creativity and human determination, and while the story long ago found its way into the history books, a film history had been lacking—until now.

As part of the celebration recognizing the Houston Ship Channel’s centennial this year, the Texas Foundation for the Arts debuts its documentary titled “Houston Channel: Deep Water Centennial” on Nov. 10 on Houston’s PBS affiliate, Houston Public Media TV 8. The 60-minute film tells the story of the genesis of the channel and details its ongoing position as one of the world’s busiest channels.

“We had done a number of historical and cultural documentaries for PBS stations over the years, so the Port Committee came to us about a year ago to talk about doing a documentary on the history of the channel,” said the film’s co-producer, Jim Bailey. “It’s such a deep, rich story that affects all of us in this area and the more we got into it, the more interested we got about documenting how it all came about and the history of some of the people who worked there.”

Bailey says he and co-producer Kim Lykins and their crew began doing pre-production for the project about a year ago and filming began in the spring of this year. Bailey and Lykins interviewed over 30 people, ranging from channel executives, eye witnesses, historians, authors and people who have family connections to the channel. Archival photographs of the area were obtained from the Houston Metropolitan Research Center, the Library of Congress, the Port of Houston and University of Houston archives, and private entities who loaned their photographs. The documentary also makes use of film footage shot in the 1970s and helicopters to obtain aerial views of the channel as it looks today.

“The staff we encountered at the channel wanted the story to be told and were very helpful in opening doors to allow us to get to places for vantage points where we could film,” Lykins said. “The interesting thing about the channel is that people know it’s here, but since it’s not downtown like other ports, people are unaware of the massive effort that went into dredging Buffalo Bayou to turn that sleepy little river into a 52-mile channel 100 years ago.”

While the documentary is a contemporary film, it traces the roots of the channel all the way back to the early 1800s, when legendary Gulf Coast pirate Jean Laffitte took his boats as far inland as possible, likely all the way to Allen’s Landing in downtown Houston. It also examines what was called the “Houston Plan,” in which Houston citizens voted to put up $1.25 million for the project that was then matched by the federal government in an arrangement that had never before been done in the U.S.

“The documentary is 60 minutes long, but could have easily been three hours long because we had so much information,” Lykins says. “There are topics, like Jean Laffitte and the fact that the Panama Canal is also celebrating its centennial this year, that could be made into 60-minute documentaries of their own.  But we had to keep the story flowing as best we could and painted in broad strokes so we wouldn’t get caught up in the minutiae of things.”

One of the more fascinating conversations in the film is with Andrea Gardner who, in the 1980s, became one of the first women to work as a longshoreman at the channel. Gardner, who still works with the International Longshoremen’s Association (ILA) recalls that there were very few women anywhere to be found along the channel largely because of the widely held belief that women would be a distraction to the men loading and unloading vessels. She also recounts how there were virtually no restroom facilities available for women.

“We also interviewed (long time ILA executive) Clyde Fitzgerald, who started working in the channel as a teenager and whose father and uncles also worked there. He tells great stories about the days before containerized shipping when everything had to be loaded on pallets or hand carts,” Bailey said.

The advent of containerized shipping in the 1950s and ‘60s is featured prominently in the film due its huge impact on global shipping and the Houston Ship Channel’s leading role in the development of that type of shipping.

“We wanted to show how the development of containerized shipping made a big difference globally, not only with the people who worked on the docks, but also those who worked on the ships,” Lykins said. “We talk to pilots who sail the ships to the mouth of Galveston Bay and are then met by ship channel pilots who navigate the ships up the channel and to the Port of Houston.”

Lykins said she came to realize that much of the work on the docks is similar to what happens on a music or theater stage in many ways.

“It’s a very intricate choreography that takes place, not unlike a symphony, where everybody is doing their job and everyone is crucial to the outcome,” Lykins said. “We talk to longshoremen who said they get a sense of accomplishment after getting all the cargo off of one ship and then move on to the next one.”

The producers of the film conducted extensive research on the topic before filming began, but they were frequently surprised by little known facts uncovered during the production. For example, Bailey says that after the channel was opened, many ship owners were hesitant to allow their vessels to traverse the waterway out of fear that they would become stuck. As a result, channel officials devised a system to ensure the ship’s owners that they would get through, providing a vivid example of the kind of aggressive leadership that was required at the time.

“As a native Houstonian, it was interesting to see how the channel began the day Houston began,” Bailey said. “The Allen brothers established a dock because they wanted to bring goods up Buffalo Bayou so they could start a town so, really, the channel is our whole reason for being.”

Shot entirely in high definition, it took about two months of editing to complete the film. After it airs on TV 8, Bailey says it will be distributed to other PBS stations around the state and will be made available to schools. Lykins says the debut date of November 10th has historical significance because the channel was officially opened by President Woodrow Wilson on Nov. 10, 1914. For more information on the documentary, visit Texasarts.org.