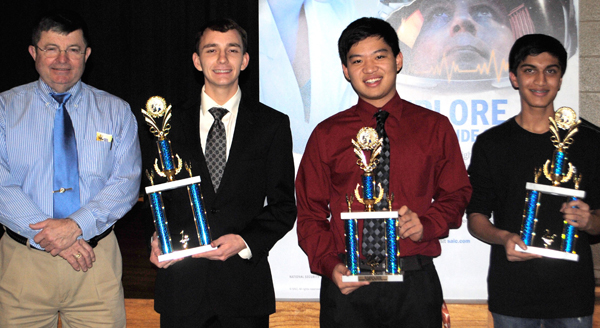 The results have been tallied and the Clear Creek School District had some good news for about a hundred students as the winners of the 2012-2013 CCISD Science Fair were announced. More than 400 4th and 5th graders competed at the district level science fair.

“We had teacher volunteers from each of our 26 elementary schools who helped make the district fair a success,” said elementary science coordinator Anne Smith. “Our community of judges worked very hard to evaluate the projects and assign the awards.”

At the intermediate and high school level, 270 students competed in four divisions and 14 different categories. Winners were announced during a special award ceremony after projects were evaluated by teams of volunteer judges from the community.

They selected Grand Award winners and place winners. Approximately 100 Junior, Ninth and Senior division winners are eligible to advance to the Science Engineering Fair of Houston.

Winners of the Jesse A. Dorrington 2013 Grand Award are:

Bridging the Gap Between in Vitro and in Vivo

Optical Characterization of SWNTS in a Magnetic Field

Shop the Beat: Effect of Music Tempo on Purchase Intentions

The Effect of Music on HR and BP