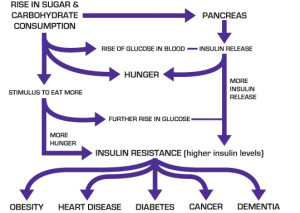 In last month’s article, we discussed the large scale nutritional change in the American diet that began in the 1970s consisting of a large increase in sugar and carbohydrate consumption and labelling of fat and fat containing foods as toxic for human health. This trend continues even to this day in large measure despite protests from the likes of Gary Taubes, David Perlmutter, Peter Attia and others. These individuals who are trying to change the fundamental paradigm that is making us and the rest of the world fat, are being sidelined as practicing quackery and recommending a diet that is dangerous for our health. Two out of every three Americans is overweight or obese and is thus an overwhelming problem of our generation. If an obese person were to ask his physician for advice, the immediate automatic answer is to eat a low fat, low cholesterol diet. As an afterthought, we are sometimes told to eat less.

In this post we will try to examine why we are fat. We are told that we are fat because we take in more calories than we expend. We are told that the reason we take in more calories is because we are lazy, industrialized and have easy availability for food and that we do not exercise enough. Plain and simple as that. This appears to be sufficient reason for the physicians and expert organizations to lay the blame solely at the American public. I find it hard to believe that 2 of every 3 of my fellow countrymen lack the fortitude and mental wherewithal to not be fat. Instead, I would like to explore the alternative hypothesis of obesity, that  a diet consisting largely of sugars and carbohydrates as the causal factor in the obesity epidemic.

The alternate hypothesis can be stated as follows. Sugar and carbohydrate consumption has changed dramatically in the last couple of centuries and exponential increased over the last 50 odd years. The latter is due to ability of the food industry to pack calorie dense and nutrient poor, high processed carbohydrates in to our food supply. Species tend to adapt with genetic changes to such large scale changes in quality of food supply and we may evolve to have giant pancreases and cells responsive to insulin that can deal with the overload of glucose molecules that we are asking our bodies to process via the food that we eat. However, I realize that I am getting ahead of myself and getting too technical.  Such a genetic change usually takes thousands of years to occur and in the meantime, two thirds of Americans are suffering from this malady without an effective treatment or prevention strategy.

So in the simplest of terms, consumption of sugar and carbohydrates leads to an increase in blood sugar levels. This results in insulin release by the pancreas to regulate the amount of sugar in blood and transport the sugar in to our cells. Insulin release is one of the most potent hunger inducing events that the human body is exposed to and leads to ingestion of more food and a delay in satiety. This excess intake fosters a milieu for more calories in than expended, leading to weight gain. An increase in weight in most of us leads to a condition called “insulin resistance” in which our cells become less responsive to the effects of insulin. Thus the sugar and carbohydrate that we consume are not taken up by the cells and the levels of sugar in our blood increases. The pancreas in order to compensate for this increase in sugar and trying to maintain a homeostasis or equilibrium in sugar levels increases the output of insulin. Thus, most obese and overweight individuals will have an increase in Insulin levels and their cells are resistant to the effects of insulin.

The actions of Insulin are worth examining at this time. We have already mentioned that insulin is one of the most hunger stimulating molecules our bodies can be subjected to. Second, Insulin increases the conversion of sugar and carbohydrate to fat. Yes, this may not be common knowledge, but our bodies are capable of storing excess calories as fat from the sugars and carbohydrates that we consume. Third, higher insulin levels increase the levels of triglycerides and other harmful fat containing proteins in our blood called lipoproteins that increase the risk of heart disease. Fourth, high insulin levels lead to an increase in insulin derived growth factors that increases our risk of developing cancer.  This milieu of higher insulin levels and resistance, increase in triglycerides and blood sugar levels are the primary causal factors in Obesity, Diabetes, Heart Disease, Cancers and Dementia.

Thus, even in an 800 word article, this statement deserves to be re-stated for its full impact. A diet high in sugars and carbohydrates leads to insulin resistance that increases our risk of obesity, heart disease, diabetes, and dementia. The fact that carbohydrate and starch consumption leads to obesity is not new but was articulated by William Banting in the 1850s in his letter on Corpulence. This letter is worth reviewing and is easily available through the link https://archive.org/details/letteroncorpulen00bant.

However, before you run off and discard all sugars and carbohydrates from you kitchen, pantry and your diet and adopt a Banting style diet (Atkins, South Beach and Grain Brain diets are modification of Banting’s original proposal) a word of caution is advisable. There are genetic and more importantly epigenetic factors that will determine your response to such a dietary change especially in view of blood lipid levels and change in substrate utilization by our brains. Then again I am getting ahead of myself. We are told and rightfully so that our brains which are about 2% of our body weight but yet consume about 20% of the calories that we ingest can only utilize sugar as fuel. This fact is largely true but fails to take into account that our bodies are uniquely adapted to situations during which food is not immediately available. It is during these periods that the brain can switch from using sugar as fuel to using ketones which are derived from the limitless supply of fat in our body. In the next blog we will explore concepts of the limited ability of our body to store sugar. We will also review the ability of the brain, heart and muscles to use ketones from fat as fuel. The process of Keto-adaptation , that is a necessary pre-requisite to understanding and adapting to a carbohydrate restricted diet will be explored.

Dr. Nadir Ali is a practicing interventional cardiologist in the Clear Lake and Bay Area community for the last 15 years. He was a Bugher Foundation Research Fellow at Baylor College of Medicine and did his cardiology fellowship at the same institution from 1990 to 1994.

He was selected as the first Chairman, Department of Cardiology at Clear Lake Regional Hospital in 2006 and served in this position till 2012. He is a busy interventional cardiologist who introduced to the Clear Lake Area the technique of Radial Angiography and Interventions (heart procedures done from the wrist artery) and Carotid Artery Stenting along with his surgical Colleagues.

He has special interest in diet, obesity and heart disease and gives a free diet seminar for his patients once a month on the last Wednesday of every month at 6 p.m. at the Searcy Auditorium in the Clear Lake Heart and Vascular Institute.

His other interest include spending time with his wife and two boys, cycling and hiking and backpacking in the National Parks.