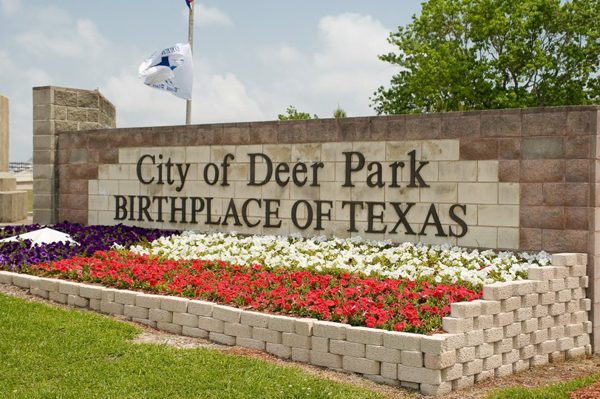 Deer Park is known as the birthplace of Texas, and it is now on the national radar for a lot more than that.  Since 2010, nationally recognized accolades have begun to stack up at Deer Park’s door.  CNNMoney placed it in their #10 rankings for most affordable places to live in the U.S.  Bloomberg Businessweek has featured Deer Park as the best suburb to live in Texas.  And of course, the question to ask is, Why?

First of all, Deer Park is a business friendly environment.  Local small businesses are consistently setting records within their respective franchises; such as Firehouse Subs, Chick-Fil-A, and Bullritos.  And there remains a strong collaboration between manufacturing and mid-range businesses, many in relation to the petrochemical industry which has a huge presence along the Houston Ship Channel.

So business is good in Deer Park and statistics show it.  But there is much more going on here, that draws national attention.  It is called quality of life.  Deer Park is a central hub for both visitors and locals with easy access to Southeast Harris County and all its amenities.  “Truly Deer Park is a 15 to 20 minute drive to Houston Downtown attractions, the Kemah Boardwalk, Baytown, Clear Lake, and close to Galveston Island,” says Tim Culp, President and CEO of Deer Park Chamber of Commerce.  Culp is known for saying, “Isn’t it a great day to be in Deer Park?”  And apparently the locals agree.

The community of Deer Park feels like a small town with market days, parks, community events, and a lack of traffic congestion.  Also, you have big city advantages.  Deer Park ISD has Recognized status by the state of Texas due to its outstanding facilities, education, and staff.  Deer Park students feed into nearby San Jacinto College, Texas Chiropractic College, and the many campuses of University of Houston.  Access to health care is a big draw in Deer Park, as well as housing and subdivisions that fit your income and lifestyle.  Their outstanding website, www.visitdeerpark.org, is very user-friendly and features four links to pages that answer the question of why you might follow their motto to, “Work, Stay, Play, Explore,” in Deer Park.

When questioned about the air quality of Deer Park, due to its proximity to petrochemical industry businesses, Culp commented, “We are confident with the air quality in Deer Park, and confident in the precautions taken by the companies in partnership with our city who go above and beyond the call of duty to make and keep it safe.”  Culp began his time as Chamber president and CEO in 2010.  “I am hard pressed to find any negatives in Deer Park,” says Culp.

As to history, Deer Park is rich.  General Sam Houston and his ragtag settlers defeated General Antonio Lopez de Santa Anna’s well trained Mexican Army on April 21, 1836.  This secured Texas’ independence from Mexico.  The Houston Ship Channel and Port of Houston brought sea access and trade to Deer Park’s back door in the 1870’s.  The actual town of Deer Park was founded and named in 1892 by Simeon West of Illinois who saw the large herds of deer that roamed the area, and foresaw a “community of opportunity.”

Other historical sites in Deer Park and the vicinity include Patrick’s Cabin, a replica of where the Treaty for Texas Independence was signed between Santa Anna and Sam Houston; the San Jacinto Monument, which is the world’s tallest memorial column; and Battleship Texas – BB35, located on the San Jacinto battleground where Texas won her independence.

Deer Park has slightly more than 32,000 residents and is a little bigger than 10 square miles.  What it offers is a small town environment with big city possibilities, which is a nod towards our roots and getting the attention of our nation.