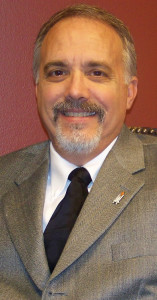 Bob Mitchell, president of Bay Area Houston Economic Partnership, gave a touching eulogy on Feb. 25 at St. Paul’s Catholic Church in Nassau Bay for BAHEP staff member David Braun, who passed away Feb. 21. Following is part of that eulogy, which is abbreviated due to space constraints.

“We’re here tonight to remember David Braun. I’m representing the entire Bay Area Houston Economic Partnership family. The BAHEP staff is truly a family. We work together, we laugh together, and we cry together. David always referred to us as the BAHEPIANS!

“We have lost one of our family members in David; he was the glue that kept us together. Let me share some words that describe this good man:

“David was a model for us all. He handled his cancer battle with such dignity and courage. He handled it with the same methodical approach he handled his job. No matter the deadline, David never flinched under pressure. He was so committed to live life the best way he could, never complaining or showing the pain he felt.

“In the middle of David’s cancer treatment, BAHEP joined forces with the Coalition for Sustainable Flood Insurance to convince members of Congress that the Biggert-Waters Flood Insurance Act of 2012 would have devastating consequences for many thousands of people and businesses across the nation. David led that effort in Texas. Last March the Senate passed the Homeowner Flood Insurance Affordability Act of 2014, and the president signed the bill into law. Through David’s hard work, along with others, this one bill saved the residents and businesses of Bay Area Houston many thousands of dollars on their flood insurance policies.

“Most people had no idea that David had been fighting cancer for three years. He had such an inner strength. David always had a smile on his face, and I do mean always.

“He was smiling last Friday when Jane Gayle and I presented him the plaque honoring him and his work at BAHEP. We told David that we are renaming our conference room after him so that his work can be remembered. The plaque will say: ‘Remarkable for his dedication to his family, his work with the Bay Area Houston Economic Partnership, and his community, David gave 100 percent of his effort in all that he accomplished. His work on behalf of Citizens for Space Exploration Texas and BAHEP’s Aerospace Advisory Committee was exemplary and will long be remembered. He was a friend to all he met and always had a smile for everyone. David will always remain a valuable part of the BAHEP family.’

“So as long as there is a BAHEP, there will be a David Braun conference room.

“David’s behind-the-scenes work on the annual Citizens for Space Exploration Texas trip to Washington, D.C., on behalf of human space exploration is a prime example of his commitment to the community and to BAHEP. He spent months making arrangements for this very important trip and was integral to its clockwork precision once we arrived in D.C.

“Throughout David’s life, whenever he was given the chance to be a good steward – a good man – David succeeded!  He had his faith, he was a good husband to a beautiful wife, and he was father to a successful son.

“Farewell, David, you were a good friend and, to the end, a good and faithful servant.

“David, we love you. Peace be with you and your family.”