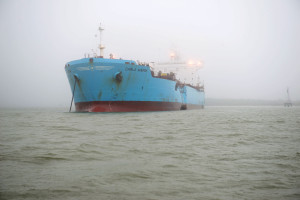 The chemical tanker Carla Maersk sits at anchor off Morgan’s Point, Texas, after being involved in a collision with the bulk carrier Conti Peridot March 9, 2015. The Maersk was carrying about 216,000 barrels of Methyl Tertiary Butyl Ether and an unknown quantity of the product was spilled. (U.S. Coast Guard photo by Petty Officer 3rd Class Dustin R. Williams)

It was a routine Monday afternoon at the Houston Ship Channel, with tankers maneuvering in and out of the waterway and workers busily loading and off-loading massive vessels carrying everything from natural gas to kitchen sinks, until everything came to a screeching, grinding halt.

On March 9th around 12:40 in the afternoon, the tanker Carla Maersk and the Conti Peridot bulk carrier rammed into each other just off the coast of the tiny community of Morgan’s Point in Galveston Bay. Within minutes, normal operations up and down the channel stopped and first responders were dispatched to the scene. The Danish-flagged Carla Maersk, carrying about 216,000 barrels of a fuel additive called MTBE suffered a massive gash in its hull and two of the ship’s cargo tanks were ruptured. As a result, U.S. Coast Guard officials issued a shelter in place order for the small population of Morgan’s Point due to fears that highly toxic vapors from the chemical might waft over the area.

While there were no injuries reported from the collision, it nonetheless required the Ship Channel to be closed for three days as over 200 people, including Coast Guard crews and special chemical spill contractors, worked to first stabilize, then off-load the potentially deadly MTBE from the damaged ship.

The Liberian-flagged, 623-foot Conti Peridot suffered relatively minimal damage from the collision, but removing the chemical from the damaged tanks of the 600-foot Carla Maersk proved to be a very delicate operation.

“Soon after the collision, we realized there had been a small release of MTBE, so the shelter in place was issued for Morgan’s Point,” Coast Guard Petty Officer 1st Class Andrew Kendrick said. “MTBE is commonly used as a gasoline additive and it is highly volatile, but evaporates quickly. But it can catch fire easily and the other concern was that in high concentrations it is a threat to human life.” 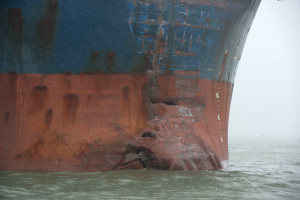 The bulk carrier Conti Peridot sits at anchor off Morgan’s Point, Texas, after being involved in a collision with the chemical tanker Carla Maersk March 9, 2015. The Maersk was carrying about 216,000 barrels of Methyl Tertiary Butyl Ether and an unknown quantity of the product was spilled. (U.S. Coast Guard photo by Petty Officer 3rd Class Dustin R. Williams)

Kendrick says as the response continued into the evening, concerns about potentially hazardous vapors being released waned and crews turned their attention to preventing the chemical from catching fire. In many ways, Kendrick says, crews were aided by the fact that the ship was carrying MTBE and not crude oil. Because MTBE evaporates quickly, rendering it non-volatile, and unlike with oil, which tends to float on the surface and can seep into the water column and harm aquatic life, MTBE is so light that it tends to sit on top of the water—where it dissipates—making it easier to remove. But the big issue of figuring out a way to remove the remaining chemical from the ship’s tanks required some creative thinking.

“We couldn’t move the ship until we got that figured out and we had to keep the channel closed while we came up with a game plan,” Kendrick said. “It was a big job with some really smart folks coming together to figure it out. Initially, we moved the cargo from the damaged tanks to the other tanks in the ship instead of trying to remove it from the ship, which would have been more dangerous. Normally you could do that with the pumps in the tanks, but because we believed water was coming in from underneath, we would have just been sucking out water.”

That’s when a creative solution was devised. It was decided that large hoses would be lowered into the tanks from the outside in order to remove the MTBE, but it wasn’t like just dropping a garden hose into the tank. Chemical spill contractors, dressed in hazardous materials outfits and with breathing apparatus strapped to their backs, were lowered into the tanks to place the hoses in the desired locations. They also sprayed a layer of a fire fighting foam material on top of the chemical to, as Kendrick describes, create a vapor barrier.

“We’re fortunate in Houston in that we have some of the best chemical responders in the world in this area,” Kendrick said. “Once we got everything out of the tanks, we were able to move the ship to Barbours Cut, where it stayed for a while before we moved it to a place in the channel where we could off load everything from the ship.”

The Ship Channel would re-open on the morning of March 12, three days after the collision, which meant that the 28 ships waiting to enter the channel and the 21 waiting to leave were finally able to proceed on their scheduled journeys. Kendrick said the Conti Peridot, which was carrying steel at the time of the accident, was moved to the Port of Houston Authority’s Turning Basin Terminal the day after the collision, but the work to stabilize the Carla Maersk required that the channel remained closed from light 86 to the Fred Hartman Bridge.

“There wasn’t much traffic in the channel, fortunately, due to fog and poor visibility that day, so the pilots had stopped bringing in more ships,” Kendrick said.

Meanwhile at Morgan’s Point, officials continued air monitoring in the hours and then days after the collision, but the shelter in place order had been rescinded once it was determined that the small amount of MTBE that had been released did not become airborne and potentially harm residents. Kendrick said the damage to the Carla Maersk was too severe to be repaired locally, so it has been removed by the ship’s owners to another destination where its fate will be determined.

“It has a gigantic breach on the side. There was a lot of weight moving around when it impacted the other ship, and I don’t know what the future holds for that ship and whether it can be repaired or not,” Kendrick.

According to Coast Guard Petty Officer 3rd Class Manda Emery, the official incident report, which should contain an estimate of the total cost of the clean-up and recovery efforts, could take months to complete, but the owner of the ship that actually spills cargo during a collision is on the hook for the cost of the response, so the owners of the Carla Maersk will be getting the bill.

Posted on Friday, May 1st, 2015 at 7:08 am | Category News | Tags: Houston Ship Channel, the tanker Carla Maersk and the Conti Peridot bulk carrier rammed into each other| Comment |