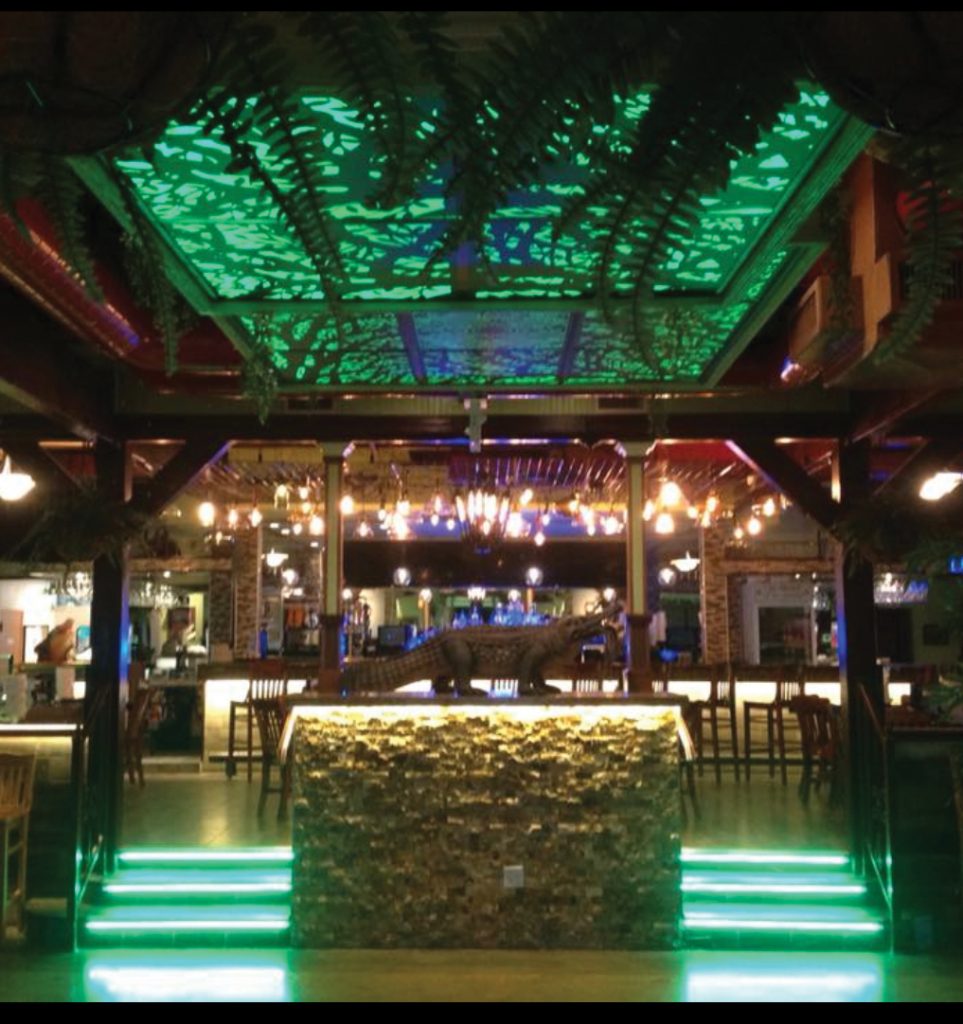 The original Crazy Alan Swamp Shack, which opened in 2010, is located near the Kemah Boardwalk. It has enjoyed steady growth and developed a good reputation of being a well respected restaurant with great drinks and fresh quality seafood at a fair price.

The new Crazy Alan Swamp Chic Shack is located at the Baybrook Mall area on Bay Area Boulevard. This new Cajun mecca features a fun and festive environment. As you walk into the Swamp Shack you will feel like you are entering one of New Orleans unique restaurants. The atmosphere is very eclectic, well decorated, and has a nice relaxed ambience.

The alligator bar, located at the center of the restaurant, is a great viewing area. It is fully stocked and loaded with call liquor, high quality spirits, and a variety of cold beer and wine. A most unique section is the restaurant’s Kids Zone. This area provides a place for children to play video games and state of the art computer games. In the meantime, parents can partake of a little adult time and relax while they enjoy their food and beverage.

Alan’s Crazy Swamp Shack was the creation of the indefatigable Alan Frank and Paul Latour. These two have different styles and have successfully created a winning restaurant concept. Both self-made men have worked hard. Franks started in 1982 as a barback at Cotton Eye Joes, bartender at Jason’s, and became owner of the renowned entertainment center Seabrook Beach Club.

Alan’s Crazy Swamp Chic Shack’s menu is the same as the Kemah location with food and beverages totally consistent at both locations. Their food offering is vast and has something for the seafood lover and the land lubber. Alan’s Crazy Swamp Shack is known for its tasty crawfish during season, but there’s much more to this quality restaurant. There select and popular menu items include the Crabvacado, Crab Corn Bisque, Crab Fingers, fried or sauteed is a must. Also try the Smoked Oysters and other fresh seafood entrees. These can be prepared either grilled or fried, whichever you prefer.

They also have juicy Burgers, Creole, Cajun Etouffee, Fried Oysters, Shrimp and Catfish dishes. For a special evening, try their signature crab and lobster entrees, one of their seafood pots or the boiled seafood feast. Yes, they’ve got crawfish, which is the best of the bay. Finish your dining experience with one of their decadent desserts. Enjoy Crazy Alan’s Strawberry Cake or the Crown Royale Bread Pudding.

Also, they have rooms for meetings, events and special occasions. As the illustrious Cajun chef Justin Wilson once said, “I ‘GAUR-en-tee’ you will like the Crazy Alan’s Swamp Chick Shack.”