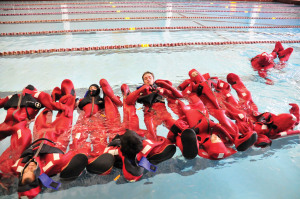 It’s no secret that the oil and gas industry is a major driver of the Greater Houston Area economy, with thousands of residents employed in the energy sector. But despite the fact that the Houston Ship Channel celebrates its 100th anniversary this year, its impact on the region’s employment landscape is sometimes taken for granted.

According to Port of Houston Authority figures, the 25-mile Port of Houston generates $178.5 billion in statewide economic impact and another $4.5 billion in state and local tax revenues each year. The complex also creates over one million ship channel related jobs statewide, and as the ship channel embarks on its second century, the demand for skilled and educated workers shows no signs of abating. San Jacinto College, through its maritime program, is helping industries doing business along the ship channel find the qualified employees they need to meet the demands of the 21st century.

The school is part of a select group of community colleges across the nation benefiting from funds provided through the federal Trade Adjustment Assistance Community College and Career Training (TAACCCT) program. According to the U.S. Department of Labor, in 2009, the American Recovery Reinvestment Act amended the Trade Act of 1974 to authorize funding for TAACCCT. When President Obama signed the Health Care and Education Reconciliation Act in 2010, it provided $2 billion in grants over four years to help re-train workers, including veterans, the unemployed and people who lost their jobs due to changes in foreign trade regulations, for high-wage, high-skill, in-demand jobs in areas such information technology, health care, energy, manufacturing and international trade. Implemented by the U.S. Department of Labor in partnership with the U.S. Department of Education, the program helps community colleges and other eligible institutions of higher learning expand their career training programs that can be completed in two years or less.

“We are training people to re-deploy into the international trade industries through our international business maritime logistics program,” said Margaret Kidd, project director of TAACCCT at San Jacinto College. “We are the only Texas college in the consortium of 12 community colleges in the nation currently participating in the program.”

Kidd says San Jacinto College has included eight certifications related primarily to supply chain operations into its international business curriculum. The program typically consists of 60 hours of course work to be completed over two years. Courses include Principles of Import and Export, International Business and Principles of Supply Chain. Students can take national exams to earn certifications in areas such as transportation operations, warehousing operations and customer service.

“If someone gets a certification in warehousing, for example, just imagine how employable they’ll be,” Kidd says. “It’s a great way to get your foot in the door, and people in many of these jobs can make between $25 and $87 per hour.”

The TAACCCT was created in the wake of the Great Recession of 2008, when millions of American workers lost their jobs as a result of corporate downsizing and changes in international trade regulations. Since then, the program has helped to re-train thousands of workers to transition into new careers in trade related industries. It has also helped employees seeking to move into management positions at their companies attain the skills needed to be considered for higher paying, more rewarding positions.

Cynthia Nash’s story serves as an example of how the program seeks to help long time employees improve their marketability. Nash has worked in a variety of supply chain positions at Halliburton in the Houston area over the past 36 years and is currently enrolled in her first semester at San Jac. Her goal is to advance up the career ladder with the company after she earns her two-year degree.

“I’m working toward obtaining certification in logistics and supply chain management,” Nash said. “In my first semester, we’re going over logistics processes and key terms, many of which I am familiar with, but I don’t know the entire process. This has been very enlightening for me and I’m hoping to move into a management position once I complete the program.”

According to Kidd, who has served as an instructor in supply chain courses at both the University of Houston and Texas Southern University, many of the students enrolling in the program are in their 30s and 40s and were laid off from their previous jobs or are returning to school after spending years working in supply chain industries. Thanks to advances in technology and rapidly changing trade protocols, many of these employees now find that they need additional education in order to advance their careers to the next level.

“Our students work in a number of areas, including freight forwarding, purchasing, trade compliance, customer service, inventory control, packaging and bilingual marketing,” Kidd said. “In the past, a lot of supply chain jobs didn’t require degrees or advanced certifications, but that’s changing because of technology. Many employees have to be more technologically savvy or multi-lingual to work in that environment now.”

Students interested in enrolling in the program should come ready to work, Kidd says, because the courses require a high level of dedication and versatility.

“I would say that the jobs most of our students are training for are not for sissies. Our students are not afraid of getting dirty if they have to go into a warehouse setting or something. In general, they need to be really good students, have high self esteem and be very determined. While most of our students come from the Houston area, we have many students who come from areas such as West Africa, the Middle East, Latin America and China.”

Alexis Odounton, a native of the West African nation of Benin, began studying for his associate’s degree in international business logistics at San Jac in January of this year. He’s on schedule to earn his degree next year and plans to pursue a career in international logistics management, shipping or warehousing. He moved to the U.S. eight years ago to work in business administration for a company in Nebraska, but hopes the move to Texas will jump start his career.

“San Jacinto College was the right place for me because I found what I was looking for,” Odounton said. “When I was in Nebraska, I discovered that business administration wasn’t what I was looking for. Now, I will have the education to help me start working in the field that’s right for me. Plus, San Jacinto doesn’t cost a lot and I can earn my degree in a short period of time.”

For more information on the TAACCCT program at San Jacinto College or courses offered in the school’s maritime program, visit Sanjac.edu/maritime.