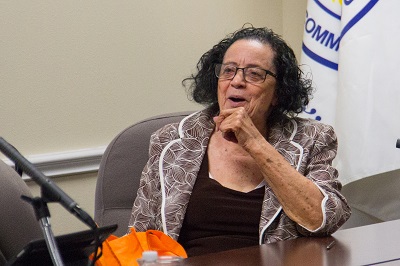 Trustee Bennie Matthews is pleasantly surprised on hearing of the College of the Mainland honor.

The College of the Mainland Board of Trustees plans to dedicate the first floor of the renovated Student Center on campus after long-time trustee Bennie Matthews.

Board Chairman Kyle Dickson made the announcement during the monthly board meeting on Monday in Texas City. While not voting on the issue, Dickson said the measure – which is expected to be unanimously approved – would be on the Oct. 22 meeting agenda.

The first floor of the two-story building that overlooks the lake on campus will be known as the Bennie Matthews Commons. Matthews, who has served on the COM Board of Trustees since first elected in 1983, was surprised by the announcement and was greeted by family and friends. During her tenure on the COM board, she has served as chairman, vice chairman, secretary and currently heads up the human resources committee.

A graduate of Samuel Huston College, now called Huston-Tillotson College in Austin, Matthews studied science and mathematics. She became a member of the local branch of the NAACP where she was a charter member and first secretary of the Texas Youth Division. She graduated with honors and began a long and rewarding journey as an educator and community worker.

As a National Science Foundation awardee and Shell Merit Fellow, she studied at New Mexico Highlands and Stanford University. She received a Master of Science in Chemistry, Physics and Mathematics. She also took advanced math and science courses at Lake Forest College, The University of Texas and Northern Illinois University as a National Science awardee.

When Matthews first ran for the COM board, she stressed that she wanted College of the Mainland to be a leader in education. “I think we all can agree that COM is a leader in education and the college owes much of that to Mrs. Matthews’ leadership,” Dickson said. “As such, as chairman of this board, I recommend, and I am sure my fellow board members will concur, that it is appropriate to recognize Trustee Bennie Matthews by naming the first floor of the newly renovated Student Center as the “Bennie Matthews Commons.” The student center currently is being renovated and is expected to be completed by year’s end. The dedication in honor of Matthews will take place in early 2019.