Clear Lake Motorists Have Something to Smile About 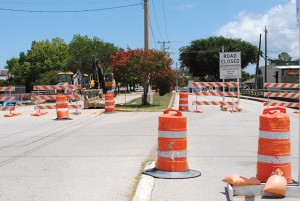 The Bay Area’s most vexing problem just got better in recent days.

First came the opening of the sparkling new El Camino Real from Bay Area Boulevard to NASA Parkway, followed shortly thereafter by  the Webster City Council voting to support an extension of the NASA Bypass, to ease traffic off Interstate 45.

The $5.3 million El Camino Real facelift centered around demolition and  replacement of the old bridge – an unusual and unified structure — over Cow Bayou between Beacon and Briargrove Streets that was built many years ago. That, however, was only part of the project.

The county built an all-new concrete roadway along the one-mile stretch and Webster added five-foot-wide sidewalks with wheelchair accessible pedestrian ramps where warranted on both sides of the road – greatly improving pedestrian mobility. New storm sewers and traffic signals were added.

For motorists, it took forever and was no doubt frustrating. But while the project was under way more than a year, the road was open to traffic all but about four months. Most probably think it was worth the wait on driving down the attractive artery for the first time.

Webster’s support was crucial to the building of the $10 million NASA Bypass Extension, which will run from where the NASA Bypass connects to I-45 westward to West NASA Parkway and eventually tie in with the proposed Beamer Road Extension, already planned by the Houston-Galveston Area Council.

“This important corridor would not only provide enhanced mobility east to west but also when combined with Beamer Road and the proposed Landing Boulevard Project in League City, mobility north to south would increase tremendously, as well,” she told the council.

“In all, the NASA Bypass Extension, the Beamer Road Extension and Widening Project, and Landing Boulevard will play a significant role in providing an evacuation route, spurring economic development, and alleviating commuter congestion.”

Mayor Floyd Myers said it would alleviate many of the area traffic problems. “I’ve been trying to get this for 10 years. I’ve knocked on every door I know of. It will not only help Webster, but everyone in the area.”

But all is not good news. The Interstate 45 South southbound frontage road at Dixie Farm Road (FM 1959) has been closed and will be for the next six months. This closure is part of a project that will widen IH 45 from six lanes to ten lanes from just south of Beltway 8 to El Dorado Boulevard. An additional frontage lane will also be added on each side and the Dixie Farm Road Bridge will also be torn down and reconstructed at street level.

This project is scheduled for completion in 2015.