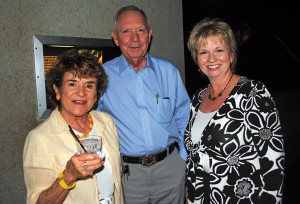 Clear Lake Chamber President Cindy Harreld, right, is happy to see Marcy and Jack Fryday as they join the BAHEP Board for a viewing of the updated Space Center Houston film, On Human Destiny.

A SPECIAL TREAT was in store for those invited to Space Center Houston for the premiere of its updated film, On Human Destiny.

They not only got to see the new film, which will be shown in the Blastoff Theatre, they got to hear its original creator and producer, Bob Rogers, talk about where human spaceflight is headed.

“Now once again we’re in transition. We’re at the dawn of an exciting new era with the launching of Dragon (by SpaceX) and the coming of Orion. The dream was not retired with the shuttle,” he emphasized as he addressed representatives of the business, aerospace and education communities beforehand. 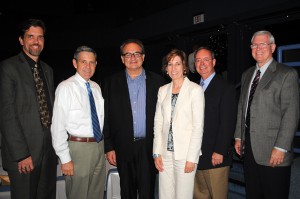 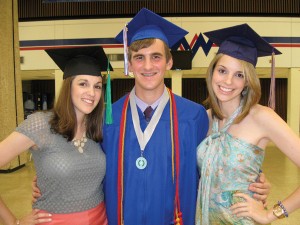 “We are now officially done with 12 years of Clear Lake High School in a row!” Jill said as the last of her children graduated from Lake. 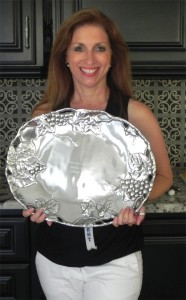 Laurie Vaughn holds up the Citation Award for outstanding service she was presented by Clear Lake Panhellenic at their year-end luncheon.

Hannah Joy Smitherman graduated from LSU, earning a bachelor’s degree in communication disorders while minoring in French and theater arts. She will begin graduate school at LSU in the fall, working on her master’s in speech-language pathology.

Emily Smitherman graduated from UT Southwestern Medical School with a Doctor of Medicine. Soon afterward she left for Durham, N.C., to start her pediatric residency at Duke University Medical Center.

WHEN ALL THE awards were passed out this spring by various clubs, two hard-working community volunteers were among those honored. 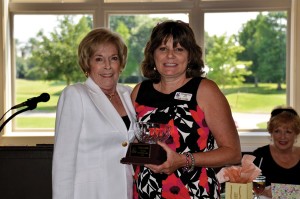 Dr. Cindy Castille, right, is presented the Assistance League Sue Holstein Award for her work with needy children by Past President Carol Short.

Laura Vaughn was honored by Clear Lake Area Panhellenic for her long hours of work with the presentation of its Citation Award.

Five days later, the Assistance League presented Dr. Cindy Castille with its Sue Holstein Award for her work with the needy. Cindy provides free dental care for children in need through Assistance League’s partnership with Communities in Schools Bay Area. 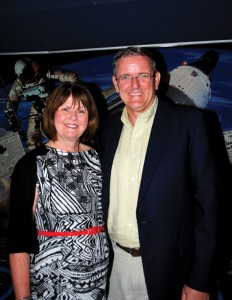 Astronaut Bill McArthur and his wife, Cindy, were among the crowd getting a backstage look at the lunar exhibits after seeing the updated version of the Space Center Houston film, On Human Destiny, at the visitor center.

IN CASE you’ve been wondering what became of former Lockheed Martin Space Operations President Jay Honeycutt and former United Space Alliance President Mike McCulley, we are happy to report the retired space luminaries are down in Florida enjoying the ocean breezes.

THE ELLISON ONIZUKA Award, established in memory of the first Asian-American in space and the hero who perished with Space Shuttle Challenger and her crew in 1986, recognizes Asian-Americans who have made notable contributions in science, technology, engineering and mathematics (STEM). 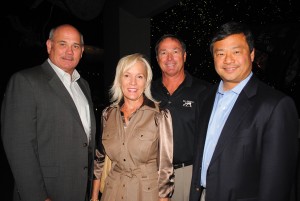 The award also identifies individuals who embody the qualities that Onizuka modeled through his technical excellence and community outreach efforts.

Dr. Kamlesh Lulla, JSC director of the University Research, was the recipient of the 2012 Ellison Onizuka Award presented by the Houston’s Asian-Pacific American Heritage Association at its annual gala. “I was very pleased and thrilled,” Lulla said. “I have always admired astronaut Col. Ellison Onizuka. It was a great feeling to receive an award named in his honor.”

Internationally acclaimed for his research and scientific accomplishments, Lulla served as a chief scientist for Earth science payloads for the shuttle program and the International Space Station. His responsibilities included training shuttle astronauts in Earth imaging for more than 40 flights.

Lulla, also an author of over 200 scientific and technical papers and co-author and co-editor of the recent NASA book “Wings In Orbit,” gives credit to his Asian-American heritage for what he has been able to accomplish. 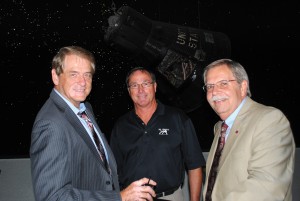 TWO CLEAR CREEK ISD teachers were among the five honored as Appreciated Teachers by the Gulf Coast Educators Federal Credit Union. They are Chris Mcglothlin of Parr Elementary and Marina Collier of Gilmore Elementary. . . . Bay Area Turning Point has named four new directors to replace retiring directors Monica Millican and Sally Rankin. They are Sherrie Matula, Jyric Sims, Mike Beck and Rita Armstrong. . . .Second Chance Pets has set the date for “There’s No Place Like Home” silent auction/dinner. It’s on the calendar for 6:30 p.m., Thursday, Oct. 4, at Lakewood Yacht Club in Seabrook. . . . Christmas in July? Garden Ridge is already putting out holiday décor, and Bay Area Houston Ballet will hold auditions for The Nutcracker Aug. 18 and 25 . . . .