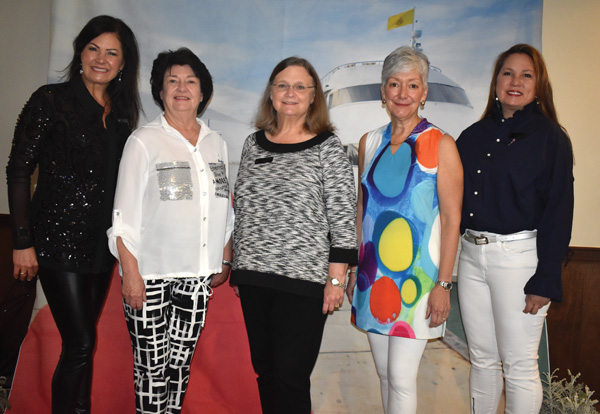 LAKEWOOD YACHT CLUB had hardly opened its doors for the Ladies Association’s “Nauti” Fashion Show and Luncheon Friday, March 5 than the crowd began arriving, all wearing masks and happy to be mingling with friends once again. Leona Pleasant was among them, as were Alice Thomas, Joy Edwards, Sandy Lewis, Rosebud Caradec, Marcia Smith, Joyce Lindsay, Rosemary Bettis, Nicole Shields and Elizabeth Koster. 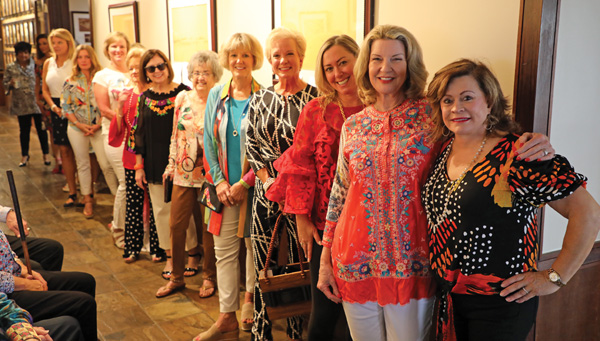 And, as they caught up on each other’s news, fashion models Johnette Norman, Ashley Boyd, Evelyn Baldwin, Marsha Taylor, Catherine Klemowits, Rubye Garrett, Stacy Covington, and LYC First Lady Jane Downs were busy backstage getting ready to show off “Nauti” (nautical) fashions and accessories from Jeanette Faulkner’s A Unique Boutique and the LYC Ship’s Store, chaired by Amy Dunphey, many might like to wear to the Blessing of the Fleet and the Commodore’s Dock Party. Joining them in both modeling and assisting the models were Commodore Michael Downs, former Commodores Tom Taylor and Jack Thomas, plus Scott Covington, Lou Marinos, Keith Klemowits and Ronald Leistad. 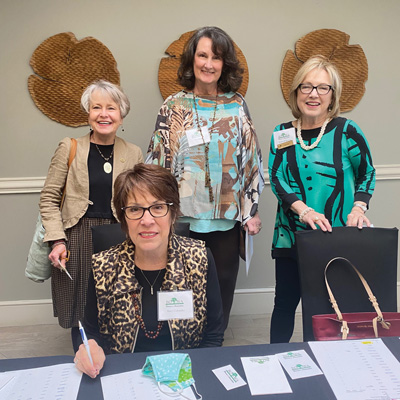 Debbie May, President Pat Adams and Darla McKitrick, from left, standing, swap ideas for the BOWA Gala with Mary Colombo, seated, at the BOWA luncheon.

BOWA Gala theme will
be ‘A Black and White Affair’

BAY OAKS Women’s Association board members are busy these days making final plans for their annual gala, “A Black and White Affair,” which was rescheduled from this past November because of the pandemic. It’s on the calendar for Saturday, April 10 at Bay Oaks Country Club.

Actually, Chairman Terri Steinkamp tells us most of the planning was done months ago before the pandemic got out of hand. She and Co-Chairman Jordan Quillen are keeping their fingers crossed that most local residents will have their vaccines and worries about COVID-19 will be mostly a thing of the past by the time the crowd begins arriving for the elegant evening.

The fun begins at 6:15 p.m. with music by the Main Street Band. Dress is black tie optinal. Terri, who served as co-chairman of the last BOWA gala, is planning a delightful menu, plus a casino. 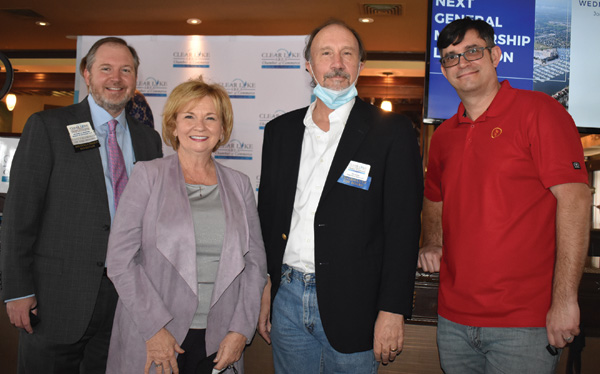 Clear Lake Chamber officials in the crowd at the monthly luncheon at Landry’s on the Kemah Boardwalk included, from left, Past Chairman Richard Simmons, President Cindy DeWease, Chairman Robert Davee and Past Chairman Jamieson Mackey.

Chamber members learn
how to deal with trauma

AS CLEAR LAKE Chambers members gathered for a hybrid meeting at Landry’s at Jimmie Walker’s in Kemah, some probably wondered how many chamber luncheons had been held in that building over the past century, and, while no one probably has a record, no doubt it’s quite a few, and always enjoyable.

Chamber President Cindy DeWease and Vice President Shari Sweeney joined Chairman Robert Davee and Vice Chairman Jonathan Cothrell in welcoming the happy crowd – some no doubt just happy to have some place to go and mingle with friends.
Among the early arrivals, you might have spotted Past Chamber Chairmen Jamieson Mackay and Richard Simmons stopping to say hello to Kevin Venable, Debbie Simmons, Genie Hayes, Mandy Knight, Amber Blake, Mark Ortiz, Deeann Duckworth, Brian Rothermel, Brie Little and Daniel Legnion as they made their way through the arriving crowd.

Guest speaker Sharon Bayus, president and CEO of Innovative Alternatives, turned the crowd’s attention to trauma – such as many Texas families have been having to deal with during the recent ice storm and the pandemic, focusing on ways employers can support their employees who are dealing with trauma, which can also come from crime, accidents and illnesses – even elections.