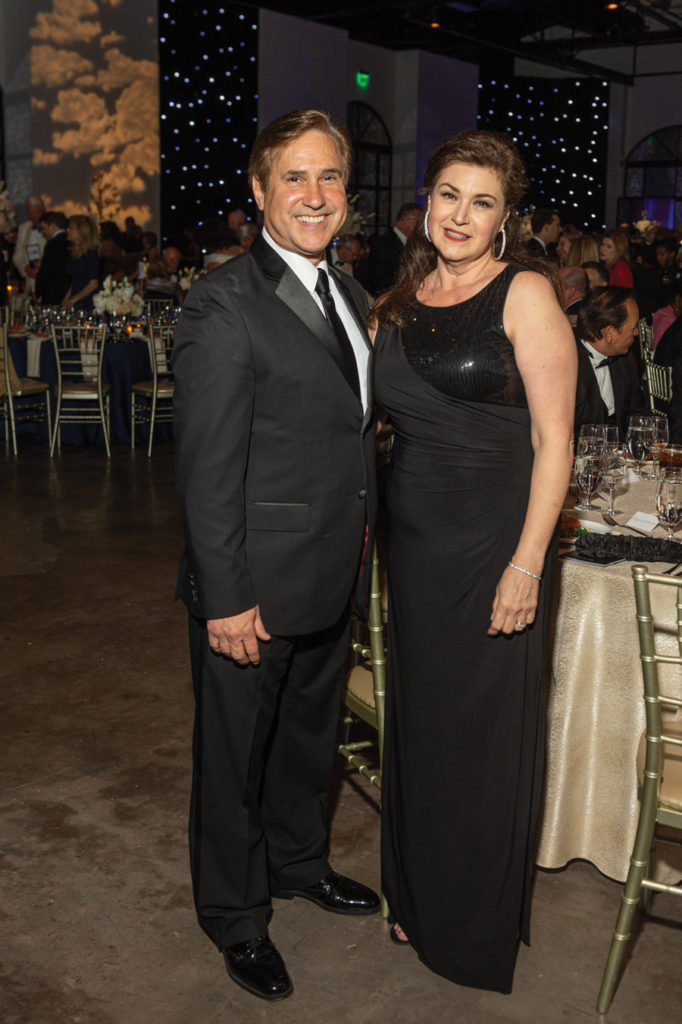 Ellington Airport General Manager Arturo Manchuca and his wife, Myrna, look for their table at the Blue Skies Gala.

MOVERS AND SHAKERS from both air and space contributed more than $700,000 at this year’s “Moonstruck: 2019 Blue Skies Gala,” to support STEM-related programs and the Lone Star Flight Museum at Ellington Field.

Held at The Revaire on Old Katy Road in Houston, the black-tie event drew a crowd of more than 500 supporters of the Lone Star Flight Museum’s educational mission.
KPRC-TV Ch. 2 meteorologist

Dr. Bonnie J. Dunbar, a former astronaut, and museum board member, joined Lt. Gen. (Ret.) Doug Owens, museum president and CEO, and Scott Rozzell, chairman of the board of directors, in recognizing special guest Gene Kranz and others who played a key role in the Apollo space program.

An inductee in the National Aviation Hall of Fame and the Texas Aviation Hall of Fame, Krantz was a flight director during the Apollo 13 mission when the spacecraft experienced a malfunction but was safely guided back to earth. Krantz attended the gala, in part, to celebrate the 50th anniversary of the Apollo program and the first manned mission to land on the moon on July 20, 1969. 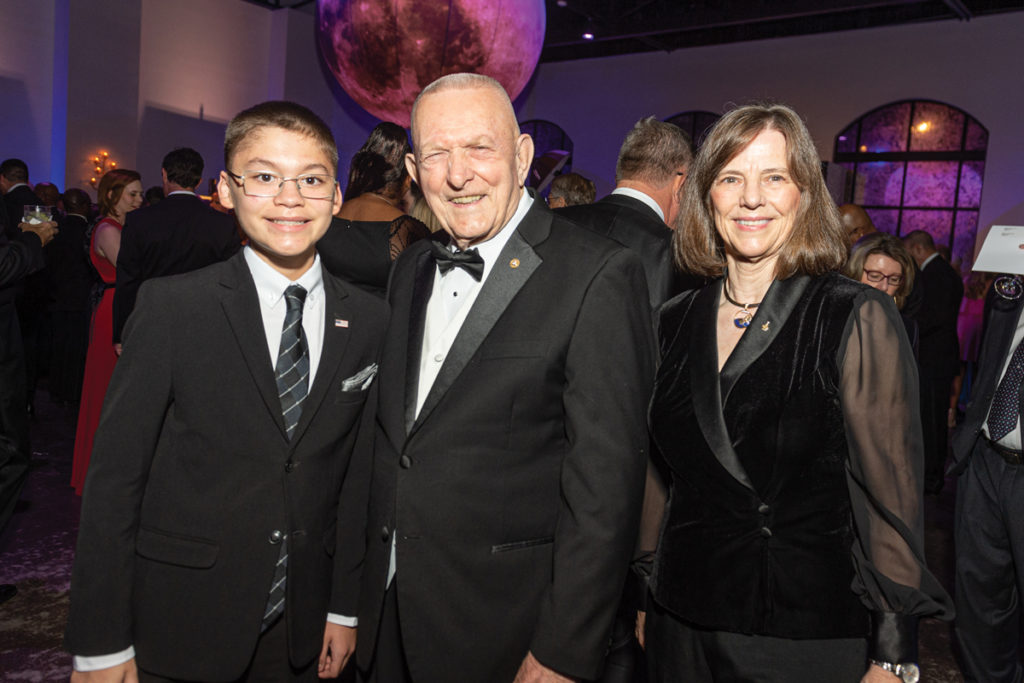 “This amazing event,” General Owens told the crowd, was made possible by the generous support of our gala co-chairs, our gala planning committee, and the gala host committee along with underwriters, table sponsors and ticket holders. I also want to thank our amazing volunteers and staff members who dedicate their time and talent day in and day out to the mission of our museum. We are committed to celebrating flight and achievements in Texas aviation as well as educating and engaging our youth through STEM, and the support we received through this amazing gala will allow us to continue with those efforts.”

Guests were treated to assorted wines, champagne, cocktails, and a gourmet three-course dinner and dancing to the music of the Richard Brown Orchestra.

Located at Ellington Airport, just 20 minutes from downtown Houston, LSFM is open Tuesday-Sunday and seven days a week all summer long. Tickets start at $9.95 with senior and military discounts. For details, visit lonestarflight.org or call 346-708-2517. 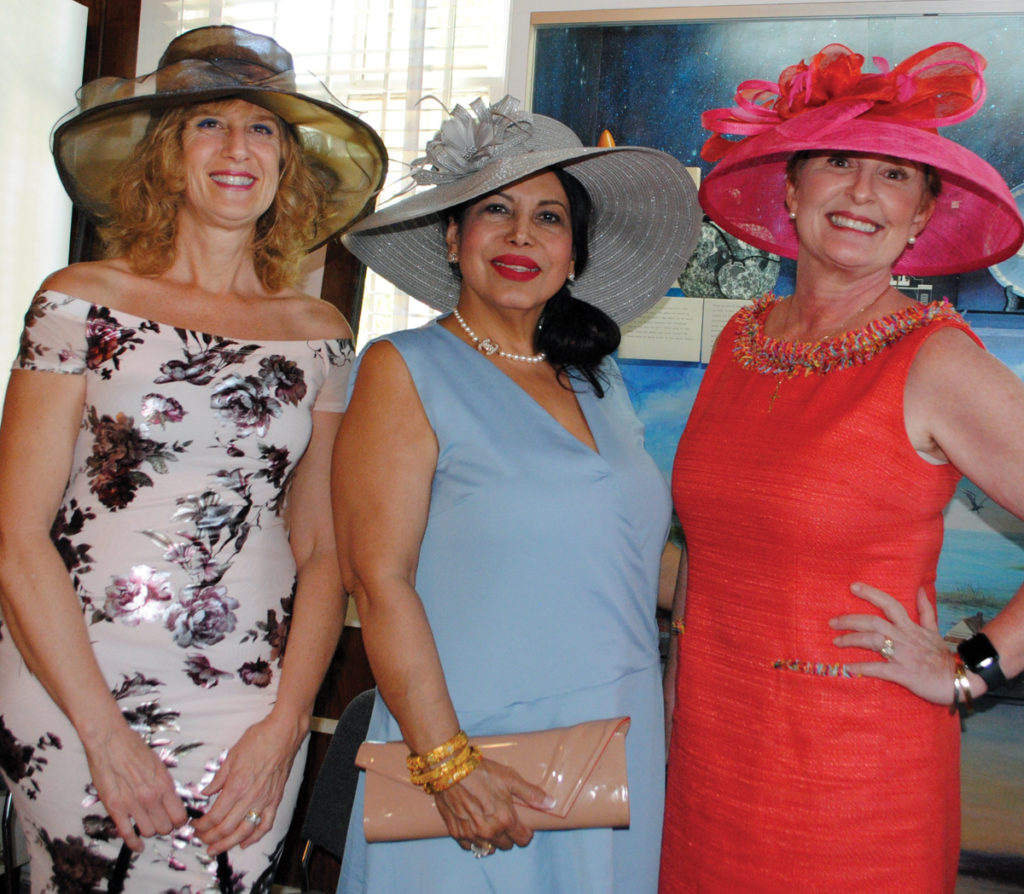 Guendaliwa Rotito, Maria Sumner and Missy Rorrer, from left, make a pretty picture as they mingle with the crowd at the Bay Area Museum Guild Silver Tea.

IF YOU RUN INTO members of the Bay Area Museum Guild this summer, and they look a bit tired, they probably are.

For them, it has been a busy spring that included four events — the annual Silver Tea, picnic, wine tasting and installation luncheon.

Many prepared food and punch for the events, while others made preparations in the museum, lining up helpers, etc. — all in an effort to brighten up our community, as they have been doing for the past 35 years.

USUALLY, the Museum Guild honors some well known person at its annual Silver Tea. But this year, the Guild recognized Webster Presbyterian Church, which has been a part of the Bay Area for 126 years, showing off items from the original church – a part of which became Bay Area Museum when the new church was built back in the 80s.

Tea Co-Chairmen Jill Smitherman and Belinda Scheurich were at the door to welcome the dozens and dozens, including many Lunar Rendezvous princesses and lieutenants, who dropped by to sample the array of savories and sweets and the punch served up by Louise Russell, Diana Dornak, Cindy Kuenneke, Badiha Nassau, Gail Devens and Sally Jordan.
Among the many dropping by, we spotted Judy Raiford, Mary Williams, Michelle Holland, Kim Woods, Mary Ann Baxter, Missy Rorrer, Maria Summer, Karen McCorkle, Shirley Brasseaux, Angie Weinman, Anita Fogtman, Jill Reason and Ava Galt, to name a few.