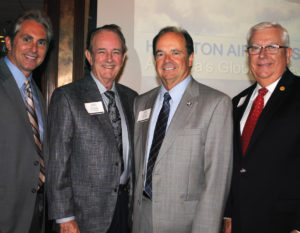 HOUSTON AIRPORT Systems Director Mario Diaz is “clearly the best” at what he does, Bay Area Houston Economic Partnership officials will tell you.

Amazing is how Dan Seal described him as he was introducing him to the BAHEP crowd at Lakewood Yacht Club.  “He not only established Bush Intercontinental Airport, he redid Hobby and is turning Ellington Airport into a spaceport. Quite amazing,” the BAHEP executive director of special initiatives said.

“Buckle up,” he told the luncheon crowd as he turned the program over to Diaz, who didn’t disappoint as he updated everyone, telling how the airport system has connected Houston with all six continents, as State Sen. Larry Taylor, and Mayors Johnny Isbell of Pasadena, Michel Bechtel of Morgan’s Point and  Louis Rigby of La Porte nodded their approval.
“It’s the only city in the South offering air flights to Cuba,” Diaz said, adding, “Soon the Houston Airport System will add guidance systems to its garages, making it easier for customers to find their cars after flights,” going on to talk about the Lone Star Museum being built at Ellington, the layers of security at the airports and adding that Hobby is one of three 4-Star Airports in the country and that the HAS wants to be a 5-Star System. 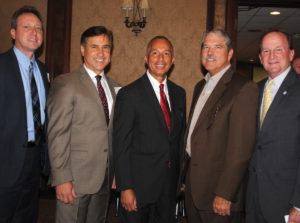 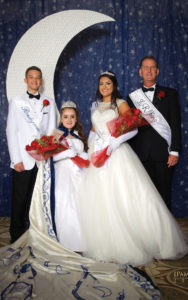 Lunar Rendezvous crowns new queen
LUNAR RENDEZVOUS has a new royal court with Clear Creek High senior Madelyn Claire Emilia Chidester elected by this year’s princesses to reign as queen over the 2017 Festival. She is the daughter of Lisa and Steven Barnes and Edmund Chidester.

Joining her in the 2017 court will be Queen Alternate Alexa Rae Trevino, a Clear Falls High senior and the daughter of Alice and Rey Trevino; and Captain Alexander Edward Struss, son of Delicia and Alex Struss and a Clear Lake High senior.
2016 Festival King Kevin Duke, Queen Mariska Mes, Queen Alternate Jessica-Michelle Monette and Captain Joey Corrao were all smiles as they welcomed them to the royal court during the festival finale, the Coronation Ball, which was held at the Galveston Island Convention Center and this year had a “Dance By the Light of the Moon” theme.

Retired astronaut Bill McArthur was back once again to emcee the black tie gala, which was chaired by Justine Powell, with Cindy Sebald as her co-chairman.

BAHBT dancers plan kickoff Sept. 14
BALLET AFFICIONADOS will be out in force when the Bay Area Houston Ballet & Theatre kicks off its 2016-17 season Wednesday, Sept.14.

In addition to offering a glimpse at the upcoming productions in Clear Lake, the dancers will be showing off their new digs — their new rehearsal studio located at 2350-D Dickinson Ave. in Dickinson.

Then, they’ll give the crowd a glimpse at Dracula, which plays Oct. 14-16, and The Nutcracker, which plays the weekends of Dec. 2-4 and Dec. 9-11, both at the University of Houston-Clear Lake Bayou Theatre; and invite all to Breakfast With the Sugar Plum Fairy Nov. 21 at South Shore Harbour Resort.

The season’s final production will be Pasion March 24-26 in their new rehearsal studio’s Black Box Theatre in Dickinson.
For reservations, call the ballet, 281-480-1617.

Dates of Rodeo events announced
THE RODEO may seem a long time off, but its first local event is only a few days away. Here’s the schedule of Bay Area events and their chairmen:

And, in case you weren’t here or don’t remember, in its early days the League used the theme, Ball of the Wild, for its annual gala, and we all marveled as doctors dressed up as cavemen and bunny rabbits and aerospace executives and educators popped in as bumble bees.

Jennie Hampton, who is chairman of the 2017 benefit, said, “Sometimes the ball had a more defining theme like the Billabong Ball, an Australian Down Under theme, or the Gator Ball, featuring cute alligators. We have decided to bring back this theme in the hopes the community will once again be buzzing about the Assistance League’s Ball of the Wild.”
Pam Bungo is Jennie’s vice chairman and Gail Ashby, Belinda Scheurich and Lori Ray are already at work on the silent auction.

This year’s informal affair is an animal/jungle theme and attire will be casual.  Stay tuned.

Annice Slade is president of the CLCCA with Terry Canup as vice president, Glenda Stroud, treasurer; and Leslie Eaton, secretary.