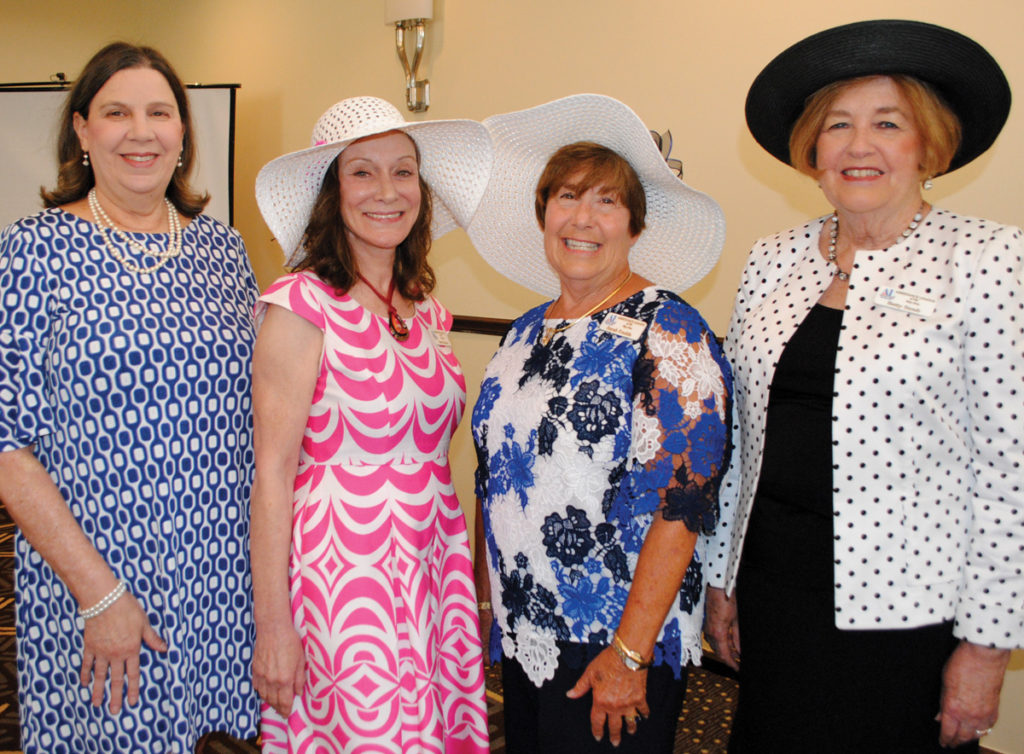 Assistance League officers for 2018 line up for their installation at the luncheon at South Shore Harbour Country Club. They are, from left, Assisteens Coordinator Valerie Piercy, Treasurer Sandra Kelver, President Sarah Foulds and Secretary Betty Stoub. President-elect Lisa Holbrook was unable to attend.

ASSISTANCE LEAGUE members gathered at South Shore Harbour Country Club this year for their annual meeting, which includes the installation of officers and presentation of awards to their hard-working members.

And, after many long hours of service to the Bay Area community, outgoing President Ann Marie Doolin installed new President Sarah Foulds and the other new officers who will lead the organization as it celebrates its 30th anniversary.

The year-end luncheon is also a time to honor some of the hardest working members. Winner of the Sue Brady Award was Kathleen Courville with Marie Keener presented the Sue Holstein Award and Yvonne Perrin, Mary Pergande and Betty Suagee winners of the ABCD Award. 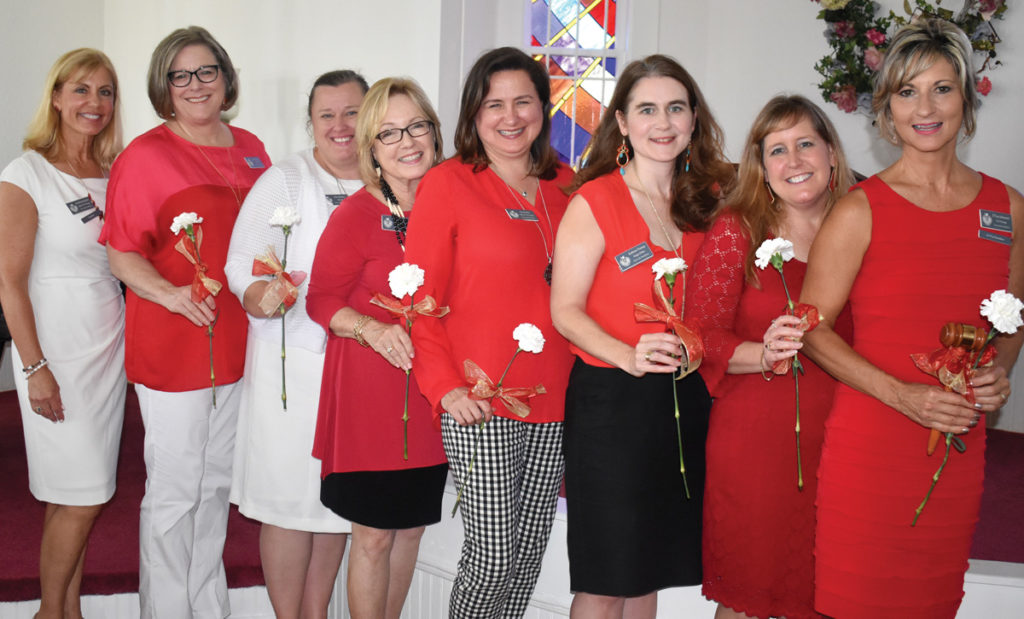 Also, Sally Jordan was honored with the Citation Award.

But the announcement of the scholarship winners got the biggest smiles from the recipients. Jacy Murdock, Karissa Murdock, Madeleine Pomes and Amie Le were the lucky winners of $8,000 college scholarships. 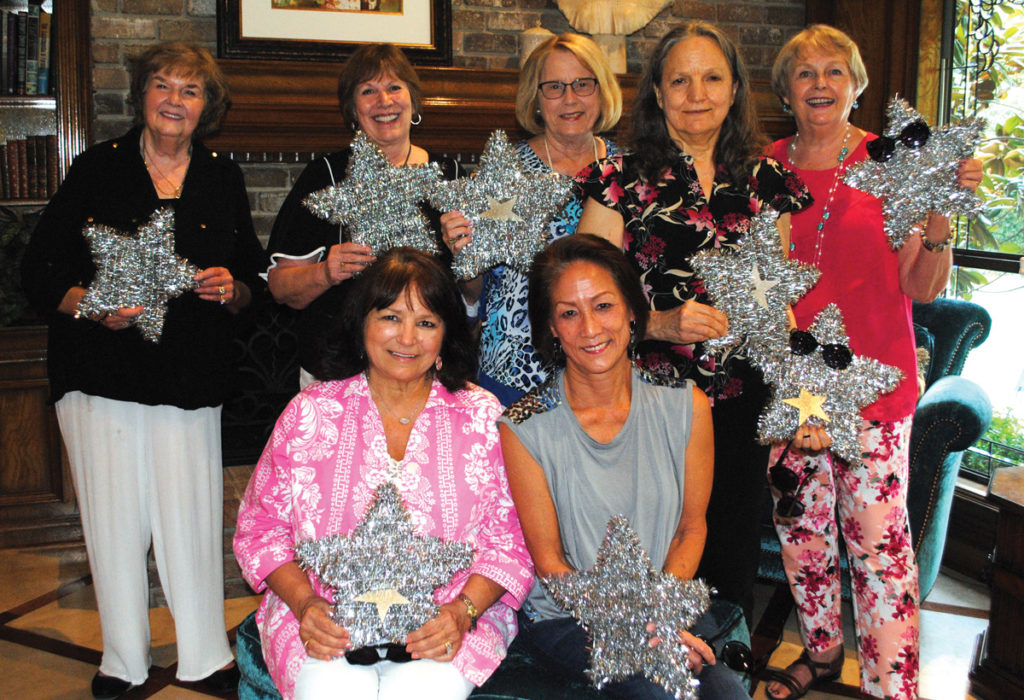 Bay Area Museum Guild officers get together for a photo after being installed at their May luncheon at the home of Carole Murphy. They are, from left, standing, Co-President Carole Murphy, First Vice Presidents Louise Russell and Gail Devens, Recording Secretary Lois Costin and Corresponding Secretary Sally Jordan; seated, Parliamentarian Kandy Johnson and Co-President Ava Galt. Brandie Corrao and Diana Dornak were unable to attend.

EDUCATION is growing all around the Bay Area, Clear Lake Area Chamber members learned at their June luncheon. More students and more buildings.

Speakers were Dr. Greg Smith, superintendent of the Clear Creek School District, Dr. Laurel Williamson, deputy chancellor and president of San Jacinto College; and Dr. Mark Shermis, UHCL dean of education – each of whom have new buildings going up.

Clear Creek ISD, Dr. Smith said, is currently rebuilding League City Elementary and completing construction of a new school, Florence Campbell Elementary, also in League City, with money from the $487 million bond passed in 2017. Work on both should be completed next year. And, while building, they are working to improve school safety.

“The climate in our schools is strong and healthy. Our focus today is on teaching kids how to have kind hearts, not just smart minds. It is simply not enough to teach and assess…We must model and teach a set of core values of caring, respect, trustworthiness and citizenship.”

That’s the good news. But he also had some not-so-good news: Along with thousands of families in recovery mode, the school district is still feeling the effects of Harvey, “with more than $19 million in damages to our facilities, and we have not received reimbursements yet on those damages.With little or no funding. . .from the Legislature, we are facing a significant budget deficit for the 2018-19 school year” and are hopeful the district can negotiate a tax swap with the school board to keep operating at optimal level.

New SJC Buildings
Over at San Jacinto College, which was recently named a Top Five Community College nationally by the Aspen Institute for Community College Excellence, three new buildings are going up and some nine older buildings are being renovated with money from its recent $425 million bond package, Dr. Williamson told the chamber crowd at the Nassau Bay Hilton.

And, for many local industries that have jobs to fill and the 42,000 students San Jac serves annually, the sooner, the better.

New UHCL facilities
Dr. Shermis also had some good news for the crowd. The UHCL College of Education dean said the new Science, Technology, Engineering and Mathematics (STEM) and Classroom Building was opening this fall and the university is working with Clear Creek ISD on STEM classes at both the university and the school district.

The 121,575-square-foot building, being built at a cost of $65.7 million is one of two under construction on the Clear Lake campus.

UHCL also is building a new $38.2 million Recreation and Wellness Center that will serve as the home for the Exercise and Health Sciences program and Fitness and Human Performance program, as well as a host of general instruction classrooms and recreational activities for students, faculty and staff.